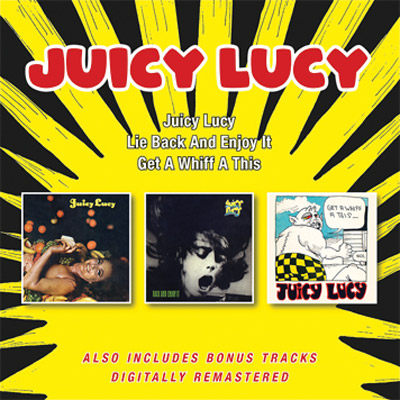 Any discussion of unsung guitar greats needs to include Glenn Ross Campbell. Thankfully, his work with Juicy Lucy is documented on this two-CD three-fer.

The late-’60s/early-’70s order of the day was eclecticism, and Campbell pushed his blues-based slide into Middle Eastern and psychedelic realms. On the self-titled debut (1969), rootsy originals wrap around impressive covers of “Who Do You Love” and “Nadine,” featuring Ray Owens’ gravelly vocals.

Campbell’s stratospheric lap-steel could be mistaken for bottleneck, but it’s a revelation to hear it as the main lead instrument. How crucial he was is proven by the fact that, on their controversially titled follow-up – 1970’s Lie Back and Enjoy It – the band added singer Paul Williams (Allan Holdsworth) and guitarist Mick Moody (Whitesnake), and soldiered on. Campbell delivered an aggressive tour-de-force on “Willie the Pimp.”

Get A Whiff A This suffers from weak material, but by then Campbell’s position in guitar annals should have been solidified.