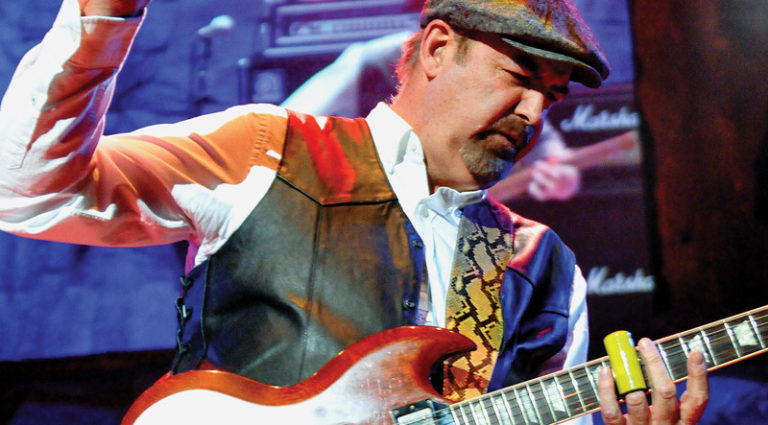 A half-century after its inception, Foghat has just one original member – drummer Roger Earl – yet the quartet is cranking out British blooze better than ever. Part of this enduring success comes from Bryan Bassett, the ferocious slide guitarist who torches everything from “Slow Ride” to “Stone Blue.” Forty-five years ago, Bassett was also guitarist in Wild Cherry, which scored the iconic dance hit “Play That Funky Music.”

We talked with him about his long career and Foghat’s smokin’ new live album, 8 Days on the Road.

You played with legendary Foghat frontman Dave Peverett in the ’90s. What was he like?
Certain people change the trajectory of your life. Dave was that person for me. I had a blues quartet in Orlando and our song list was full of obscure swamp blues by folks like Lazy Lester, Lonesome Sundown, and Lightnin’ Slim. One night, Pat Travers brought Dave to our gig and he knew every one of the songs; we jammed and hit it off as friends. In person, he was a quiet man, but when he hit the stage, Dave was a ball of authentic rock-and-roll energy. For gear, if you look back at old concert photos, you’ll mostly see Dave playing a cherry double-cut Les Paul Junior with a PAF or, earlier, his tobacco single-cut Junior. He loved that straight guitar-to-amp sound – I never saw Dave use a pedal.

The band’s late lead man, Rod Price, doesn’t get his due as a slide player.
I had the pleasure of playing with Rod when we did a Foghat tour of Europe as a five-piece, which was a master class in slide technique. Seeing him play up-close every night was something I won’t ever forget. His wide vibrato and finger muting, to control sounds coming out of a loud, overdriven amp, was something I watched closely. These are lessons I still use today.

What gear did you use on the new live album?
For years now, I’ve used two Marshall JCM 900s in stereo, and a TC Electronic G Major in the effects loop for a bit of delay and chorus. On the floor I have a Boss compressor for sustain on slide solos, a Crybaby wah, and Boss tuner. I use natural amp distortion, so amp biasing and good tubes are essential to my sustain.

What is your favorite Foghat song to play live?
My current favorite is “It Hurts Me Too,” a blues classic that our singer/guitarist Charlie Huhn just kills.

Foghat covers Wild Cherry’s “Play That Funky Music” on the live album. It must have been wild to play on a monster record when you were 22 years old.
It truly was amazing as a young guy to have such a big hit. Wild Cherry went from playing clubs to arenas in about a month, and toured with some of the greatest R&B acts of the day at the peak of their powers – Earth, Wind & Fire, The Jackson 5, Average White Band, the Commodores, Isley Brothers, and many more. Pretty mindblowing for a young musician.

Do you remember the “Funky Music” session?
I remember it well. We recorded at the Cleveland recording studio run by Ken Hammond, who recorded the James Gang, Grand Funk Railroad, and others. My part was played using my early-’70s blond Strat with a black pickguard through a Music Man 4×10. The tone was very dry, as you can tell by my intro lick. It was the first or second take, as we’d been playing the song in clubs for some time. Later, we added horns, and Ken mixed it. I still own a ’70s tobaccoburst Les Paul I used during the Wild Cherry days.

If you could go back 45 years, what would you tell young Bryan about surviving in the music business?
I would tell young Bryan to learn as much as you can about the different styles of music, because younger musicians are like sponges – the more you learn, the more you can incorporate into your style. As far as surviving the music business, I would tell any young musician to participate in composition and establish a publishing company. You don’t only have to be a good player, but strive to be a good writer, as well.

Foghat has been around for 50 years. Are new fans discovering the music?
Absolutely. Fifty years is a lifetime of music and it’s really the legacy of drummer Roger Earl. He has been continuously bringing music to the world since the late ’60s, and his energy and inspiration keeps Foghat relevant to us as players and to our fans. There’s nothing like live rock and roll to excite a live audience, and we’re proud to still be able to do it at this juncture in our career. We can’t wait to get back out on the road and continue to rock.