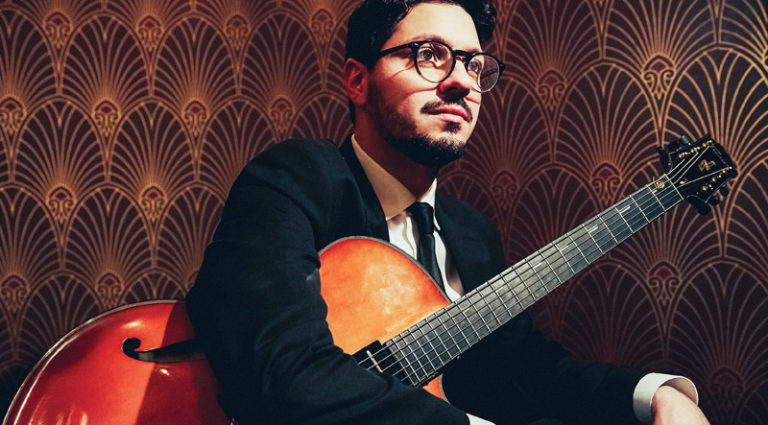 In the 1940s, jazz pianist Art Tatum wowed audiences with a virtuoso technique that sounded like two players. Today, Pasquale Grasso is similarly approaching the archtop six-string, harmonizing runs and melodies in a way that sounds like a guitar duo, not just one man.

Raised in Italy and based in New York City, Grasso earned the admiration of fusion hero Pat Metheny, who once told VG’s Dan Forte, “The best guitar player I’ve heard in perhaps my entire life is Pasquale Grasso… He has somehow captured the essence of that language from piano onto guitar in a way that almost nobody has ever addressed.”

Your harmony approach is so unusual, often sounding like two players, as on “Body and Soul.”
That’s a great compliment and I’m not sure how to respond other than to say that I practice every day until the sound in my head comes out of the instrument. All of the musicians I love are inspirations for new ideas that form my style, because it’s still growing. And it’s gonna be growing until the day I die.

You deploy a lot of transitional runs, like whole-tone scales from one chord to the next, like pianists Art Tatum and Bud Powell.
Well, Tatum is my inspiration for playing solo guitar, so I learned it from him. When I first listened to him, I couldn’t believe what I was hearing. I’d play Tatum’s records all day and couldn’t understand anything he was doing – it seemed like there were two pianos. But I was always attracted to the pianists of the ’40s and ’50s like Tatum, Bud Powell, Thelonius Monk, Teddy Wilson, and Billy Kyle. On guitar, Charlie Christian, Tiny Grimes, and Oscar Moore were my favorites. These days, I just play what I hear in my heart and mind.

How did you get that silky vintage tone on Solo Ballads? It’s like a recording from the ’50s.
I’ve always loved that guitar sound from the ’40s and ’50s, as well as the sound of classical guitar. I still try to have as much of the acoustic sound as possible when I play with an amp. I used a ’53 Gibson GA-50 in the studio and love the balance of the sound those old amps have. I wish there was a new one that’s comparable, but I haven’t found one.

How did you choose which standards to interpret?
I chose songs I’ve performed for my whole life – favorite ballads that remind me of my childhood. I’ve always been a romantic – I’m a Southern Italian – and I grew up watching my parents, who have been in love for more than 40 years. I tried to add more classical guitar to the melody. As one example, “When I Fall In Love” is beautiful, and reminds me of what it means to be in love. I always want people to just enjoy what I’m doing. Put Solo Ballads on and drink a glass of wine. It might be relaxing or help you concentrate; I just hope you forget about the world for a minute and enjoy yourself.

How do you describe your picking technique?
It’s a hybrid between jazz picking from the modern plectrum school of [George Shearing guitarist] Chuck Wayne and the classical-guitar technique. My technique changes month to month, and I still have a lot of work to do to be able to play what I want.

Which archtop guitar do you use?
My guitar was made by the great Bryant Trenier. It’s one of the finest instruments I’ve ever played in my life. Bryant and I have known each other for a long time and he knows what I look for in a guitar.

Pat Metheny is obviously a big fan of yours.
Pat is one of the nicest and most-talented people I’ve ever met. He’s a true artist, a guy who knew what he wanted to do with music from the beginning. It’s always inspiring to see how he’s able to come up with different ways of seeing the instrument. No matter which guitar or style he’s playing, I love Pat’s approach.

How did a young musician like you discover old forms such as swing, bebop, and cool jazz?
My parents, Rocco and Anna, are big jazz fans, and I grew up listening to old recordings. Instead of watching TV at night, my dad would put on a Chet Baker record and we’d listen. Something about the feeling that the swing and bebop musicians had has captured my attention since I was a little kid.