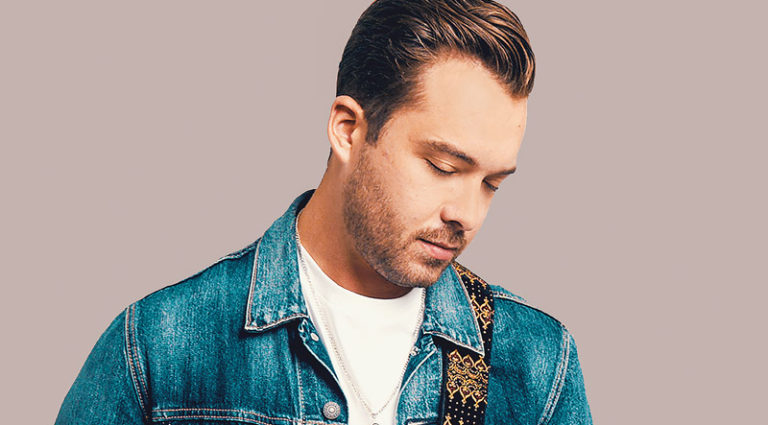 Six Strings, the debut EP by 26-year-old Alex Hall, establishes the Georgia native as one of the new generation of guitar-slinging country vocalists. The work is different from the album Hall intended, but the pandemic forced creative re-thinking.

It wasn’t the first time Hall, who grew up on a horse farm near Gainesville, faced a challenge.

Anxious to play guitar at age five, his parents bought him a Takamine G-240, only to be told by his teacher their son’s difficulties reading music would make it a challenge to learn. A deeply discouraged Hall didn’t play again until he was 14, when two teachers encouraged him to sing and write songs.

“I figured, ‘Maybe I’ll break out that old Takamine, cause if I’m gonna write songs, I gotta put music to ’em.’” After nine months learning chords from a local guitarist, he began playing locally.

An Elvis Presley and Johnny Cash fan, Hall’s songwriting inspirations were his parents’ musical heroes – Waylon Jennings, Willie Nelson, Merle Haggard, and Kris Kristofferson.
“I grew up listening to mainstream country music – Vince Gill and Brad Paisley were dominating the radio by then.”

Singing and writing remained his focus, but inspired by Paisley, Gill, Lynyrd Skynyrd, John Mayer and Keith Urban, he worked on soloing.

“I play primarily by ear,” he said. “I grew up playing in clubs and bars, so I would just watch and listen and pick it up fairly quickly.”

In high school, Hall played up to 125 dates annually before graduating and moving to Nashville in 2014.

“A few years in, I met [songwriters] Pete Good and A.J. Babcock, then got my first publishing deal.”

Monument Records’ Shane McAnally, impressed by Hall’s voice and songwriting, signed him in 2019. The next year, he was en route from Washington, D.C. to a gig in London when borders closed due to Covid. He returned to Nashville, where, “A few weeks went by and we were all locked down. Not much was changing.”

Monument then decided on a six-song EP – the number of songs Hall had written. It would focus on his voice and guitar, “…kind of stripped.”

“Brad and Vince were the two I was really nervous about, just because I grew up listening to them and covering their songs, and idolizing them.”

Socially distanced, Tursi, Townes, and Ashton worked at Good’s studio. Gill, Osborne, and Paisley e-mailed files; Gill joined on the ballad “Never Seen the World,” Paisley on the explosive “The Last One to Leave,” where he duels a bit with Hall, and Tursi added a break to “The Other End of the Phone.”

“Vince sent one guitar track and one vocal track for his harmony,” Hall noted. “His tone is just so pure. It’s exactly how his voice sounds. Paisley’s was pretty similar. On ‘Jealous Love,’ John matched what I did.”

Hall’s main guitar had been the Gibson VOS Custom Shop 1957 Les Paul Goldtop he bought in 2011. On parts of the album, he used a VOS Custom Shop 335 in Good’s studio. The Tele he holds on the EP cover, however, proved transformational. He bought the well-worn Mexican-made Fender at a Guitar Center.

“I plugged it in and it sounded just like a dream,” he said. “It wouldn’t go out of tune, and has become my go-to style of guitar. My playing style shifted so much because of that $400 guitar. Now, I’m working with Fender and have three (Telecasters).”

On acoustics, he uses Elixir phosphor-bronze mediums; for electrics, he prefers GHS Boomer .010s, and he tunes a half-step down.

“I cannot use any pick besides Jim Dunlop mediums – the Tortex,” he adds.

Hall hit another snag during the sessions. His Deluxe Reverb blew while tracking his electric parts.

“Everything was closed, so for the rest of the record, I used a Kemper Profiler.”

“As horrible as this pandemic has been, to me and a lot of other people, it’s a blessing I was able to make this record. It shaped the way my music’s going to sound, not only as a player, but as an artist, songwriter, and musician.”