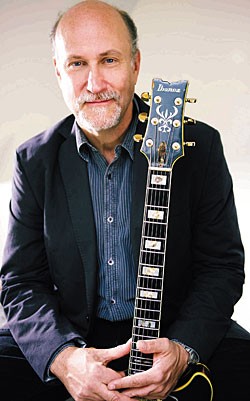 It’s no surprise John Scofield’s latest release, Piety Street, takes him down a different path than his contemporaries might follow.

After all, this is a guitarist who has spent most of the last two decades exploring different routes of music, whether straight-ahead jazz, chamber music, organic funky jazz, jam music, or old-fashioned rock and roll.

Piety Street takes on another form of music, but with a twist. “I wanted to make a blues guitar record, really. But, I didn’t want to make just another blues record because it’s been done so much and so well, you know? I was thinking about what kind of material would work on the record, and I’ve always been a fan of old-style gospel music. I thought, ‘Why not take a bunch of that and record it.'”

Scofield had long wanted to record in New Orleans, and spent time there before assembling the band for this record – Jon Cleary (keys), George Porter Jr. (bass), and Ricky Fataar (drums). In another non-traditional step, most songs have vocals from John Boutt. Scofield doesn’t see his exploration of genres as extraordinary.

“I’m not sure if my playing is different on each album, but I find places where my style works in the music,” he said. So, what fuels his drive to try different styles?

“I’ve been lucky. Even when I was primarily a side man, I was playing in different groups. And as long as it’s something you feel like you can be a part of, honestly, it’s good to mix it up because you never have time to get sick of anything.”

On the sessions for Piety Street, Scofield employed the same guitar he has been most associated with for the past two decades. “I play the same old electric guitar I’ve always played – my Ibanez AS-200. I’ve had it since 1982, when it was given to me by the company. I did use a Strat on two of the songs. I bought a Custom Shop Relic, which are made really well. I really like it.”

With the record being made in New Orleans, Scofield’s amp choice was affected by the hurricane season. “I wasn’t going to bring my amps from New York, so I asked Vox to hook me up with a couple of their AC30s, which are what I use on tour. Unfortunately, in September, when we were recording, Hurricane Gustav hit the area, and all shipping was delayed, so they didn’t get there and I had to hustle up some amps. George Porter knew some guys and we ended up with an older AC30 that was pretty good, and a Matchless DC30 with two 12″ speakers. The amps sounded good and I like the guitar sound on the record, so sometimes I guess you just have to compromise.” On tour, Scofield brings his own Voxes, otherwise they’re supplied by the concert promoters. 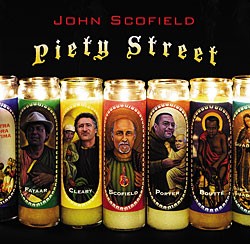 Talk to any guitar player and they’re likely to lament the fact they didn’t keep the guitars that started them down the path of playing, but Scofield’s story ends happier than most of those tales.

“A few years ago, I was contacted by a guy who had my high-school guitar – a ’66 Tele that I bought new at Manny’s on 48th Street in New York. I sold it in ’68 to buy a Les Paul. The guy I sold it to gave it to another guy in Connecticut, who kept it all those years before moving to Texas. He came to a show I was doing in Austin a few years ago, and I played it. It was in good shape – had the same case and everything. I remembered the dents I put in that case. He asked if I wanted to buy it, but wanted a lot of money. I told him I’d just buy a new Tele, and I did, from Fender’s Custom Shop. Well, last year, the guy got back to me and made another offer. I couldn’t refuse, because it’s got such sentimental value. So I bought my first guitar – I own it again! I had it set up, and it sounds killer!”

Scofield is prepping a tour to support the new disc, but already has another project recorded that takes him down another path. He recorded with Holland’s Metropole Orchestra, conducted by Vince Mendoza. “He wrote a bunch of arrangements of my tunes, and we added two of his. It turned out really cool, so that should be coming out in the next year or so.”

Not surprisingly for a musician who is continually searching for new avenues of music, the guitarists he listens to cover a pretty wide spectrum. “There’s a guy in Australia I like a lot, named James Muller. There’s Peter Bernstein, who’s a real good jazz player; Kurt Rosenwinkel, Lionel Loueke, and Derek Trucks, who’s really brought slide guitar to its pinnacle. Really, there’s a bunch of guys out there.”

And while the jazz giant says he’s not sure where the next project he records might come from, he admits it could very well take him down a path that doesn’t fit the mold. “I guess one thing just informs the other,” he said. “You learn how to play in a different way that you can bring to another style of music.”


This article originally appeared in VG‘s July 2009 issue. All copyrights are by the author and Vintage Guitar magazine. Unauthorized replication or use is strictly prohibited.
John Mayer+John Scofield-I Don’t Need No Doctor