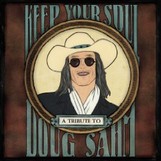 When Doug Sahm died in November ’99, the music world (and especially Texas) didn’t just lose a great artist; it was as though it lost several.

There was the country and Western swing child prodigy, the San Antonian pachuko teen rocker, the would-be British Invasion hit maker (with “She’s About A Mover”), the San Fran hippie, the force field driving Austin’s progressive country scene in the ’70s, the closet (but skilled) jazzbo, the leader of the Last
Real Texas Blues Band, and the brains behind the Grammy-winning Tex-Mex supergroup the Texas Tornados. And in addition to being a one-of-akind singer and prolific songwriter, he played steel guitar, fiddle, piano, guitar, bajo sexto, and probably a few other instruments – all extremely well. His longtime
guitarist, John Reed put it best when he called Sahm “the human synthesizer of all Texas music,” but his stylistic range was actually bigger than the state’s – which is saying a lot.

It was only a matter of time until a tribute CD would be released, and thankfully Doug’s son, Shawn, with the help of David Katznelson and former Austinite Bill Bentley, did it right. Everyone involved had some connection with Sir Doug, and all concerned turned in stellar performances.

Thee Midniters’ Little Willie G. gets the call to kick things off with “Mover,” Ry Cooder’s overdriven guitar replacing the original’s Vox organ. Pedal-steeler Greg Leisz backs both Greg Dulli and Dave Alvin (on “You Was For Real” and “Dynamite Woman,” respectively), while the aforementioned Reed shows up with Charlie Sexton (“You’re Doin’ It Too Hard”) and Austin ’70s legends Freda & The Firedogs (“Be Real”). Jimmie Vaughan gets bluesy with “Why, Why, Why,” while Delbert McClinton nails “Texas Me” (with James Pennebaker on steel), before Shawn Sahm closes the proceedings, sending out “beautiful vibrations” to his dad and playing all the instruments on an uncanny version of “Mendocino.” As Shawn says over the opening vamp, echoing his father’s impromptu intro on the Quintet’s 1969 hit, “The Sir Douglas Quintet is back” – and it sure sounds like it.

Fountains of Wayne – Traffic And Weather