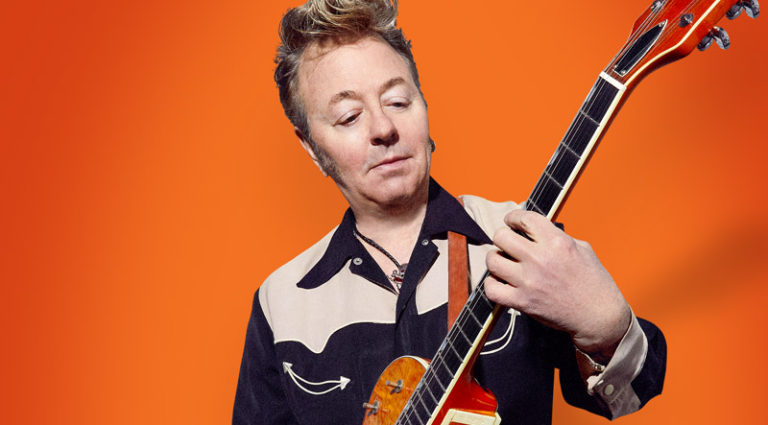 Like any guitarist at his level, Brian Setzer lives life answering the call of music. Grateful for the gift, he’s able to instantly convert thoughts to riffs and songs, as effortlessly as inhaling. His new album, Gotta Have The Rumble, revisits the tried-and-true rockabilly themes that have spurred him for decades – motorcycles, hot rods, girls, and guitars – but also meets his self-imposed challenge to make music that sounds fresh.

For the recording sessions, Setzer relied mostly on one of his signature Gretsches that had proven so roadworthy it only made sense to reward it with studio time. A vintage 6120 carried the remainder of the load. The same, though, couldn’t be said for his recent touring amps.

“All of the amps I’d taken on the road were toast,” he said. “Luckily, I had a couple of good vintage Bassmans laying around; one of them nobody had seen before because I had put it away a while ago.”

Recording during the pandemic forced him to work without other musicians in the studio, which was a first. He tracked guitar and vocal parts in his adopted home state of Minnesota and sent them to players in Memphis and Nashville, who added bass and drums. If the scenario presented any challenges, you won’t know it by listening, and Setzer is genuinely pleased with the results.

“I think this is one album I’ll keep going back to,” he said. “All the tones were captured, they’re really good songs, and it doesn’t sound like an old record, which is the hardest thing to do – that’s the trick.”

How did you choose guitars for these sessions?
I lined up four or five of my signature guitars, and one was the winner. And it’s not from the Gretsch custom shop – it’s an off-the-line 6136 Black Phoenix with TV Jones Classic pickups. I tried some of the vintage 6120s, too, but when it comes down to it, a guitar’s got to work and have the tone. That one had the whole deal – played in tune and sounded amazing through the Bassman. Once you nail a sound in the studio, you don’t want to change anything, so that guitar is on three-quarters of the album. For the rest, I used a ’59 6120 that T.V. Jones worked on for me. He’s a master scientist.

Did the Bassman make it all the way through?
Yeah, except for the first track, “Checkered Flag,” which is a really clean ’64 Bandmaster I used because it has vibrato. That amp’s trick is its original Oxford speakers, which sound fantastic. Over the years I’d swap them out so I could turn it up; I was basically using a Marshall by the end, it got so loud (laughs). Then I tried it again with the original speakers and thought, “Oh, this is sweet.”

Did working without other players in the studio affect the way you played?
Well, I had to imagine a band was backing me because with a band, you lay into it more in certain spots and you lay out in certain spots. We used software to create drum sounds instead of just a click track – we chose Ringo’s drums (laughs) – and it really locked me in. Playing to a click track is like the old pong video game – beep, beep, beep, beep – but with an actual drum sound it was very comfortable, and when the first track came back from Julian [Raymond, his co-producer], I was really blown away.

The positives about doing it this way was it’s less cluttered – you’re not tripping over cords in the studio and if there’s a mistake, it’s you making it. I’d do it again.

When did you first connect with Julian?
Julian, I met in Nashville when I played on a Glen Campbell tribute album he was making. For this record, I told him I wasn’t expecting much, but he said, “I’ve got [bassist] Dave Roe in Memphis and [drummer] Victor Indrizzo here in Nashville. Send down the parts and we’ll get back to you.” I’d never made a record this way, and I was really, really surprised by how well it worked. It was so easy.

How about Jason Orris?
Jason is an engineer who owns Terrarium, a studio in Minneapolis. I met him a couple of years ago. He works really quick, which is good because in the studio I get that quick New York thing going. So, we had that connection and once we’re in there, we just want to work. We don’t want to stop and have lunch, we don’t want to talk on the phone. We love getting the job done.

Did you have guitar rhythms or leads worked out in advance, or did you want to be spontaneous?
Well, the solos are half and half. I get a really cool idea for a guitar solo and I’ll base it on that then let it take off. On “Cat With Nine Wives” I came up with a couple of cool almost-bebop solos, like starting with something Cliff Gallup might do then taking it somewhere else. I said, “Let’s come up with a cool, jazzy kind of thing.”

With all of my songs, I come up with a riff out of nowhere. It always works that way for me – they’re gifts I receive from the songbird. It’s funny when people say, “That’s one quarter Les Paul, one quarter Jimmy Bryant, one quarter…[someone else].” But it’s not. It’s just these little ideas that come, and once I turn the faucet on and get rolling, it really snowballs. The first song I wrote this time was “One Bad Habit,” with its crazy augmented-triplet thing. I don’t know where that came from and it has no business being in a rockabilly song… or any song (laughs). It’s something I made up while sitting around, noodling.

Another one that started with a different sort of riff was “Smashup on Highway One,” and I don’t know what that is – some kind of Middle Eastern riff. It came from playing “Miserlou” with the Stray Cats one night. I started on it, and it just sounded so cool and brought the house down. So I came up with that riff and stuck it in a rockabilly song, and it’s very different in that context. I like to take that music out of the ’50s and move it forward.

Is that a real Coral Sitar we hear on that?
It’s not. It was a Coral copy I had laying around the studio, and it was hard to work with because the intonation was terrible. I had to re-tune it every time I did the riff (laughs). It’s blended with my Gretsch.

Which banjo do we hear on “Rockabilly Banjo?”
That’s my Gibson Earl Scruggs. It’s 10 or 15 years old.

You collaborated on most of the songwriting, especially with Mike Himelstein. What did he bring?
Mike wrote quite a few lyrics. With him, it’s the chemistry. I like the way he puts words together; he’s not flowery. I only ever had that with one other guy, and that was Joe Strummer. When Mike sends lyrics, I get lit up and basically write the rest on the spot. I did that with “The Cat With Nine Wives,” and it was so clever and fun; I loved its story and how the words played out. He told me, “Most songs are about the guy that doesn’t want to get married, but I’ve got one about a guy that loves getting married so much he’s done it nine times.” I had this bebop rockabilly riff laying around, and when he handed me those lyrics, I said, “We’ve got to go through the wives… (sings) I’ve got one, two…” And then instead of a turnaround, I played that F6/9, Bb6/9, to the D. It was a jazz thing. And that’s what really flipped it in my head. That would not have been done in rockabilly, but it’s valid in my world because it’s different. And I was blown away by what Dave and Victor came up with to follow my guitar.

You wrote two songs on your own – “Drip Drop,” which has a cool Buddy Holly vibe, and “Turn You On, Turn Me On,” which is an ode to a motorcycle and hints at Bo Diddley.
“Drip Drop” started when winter was finally over and I saw icicles dripping. But you can’t sing, “Drip drop, the icicles go dripity drop.” That’s not poetic (laughs). So, what else goes drip drop? It has to have a ring to it; “My tears go dripity drop… I don’t know why my tears won’t stop.” And then it snowballs quickly to become a song.

“Turn You On, Turn Me On” came to me one day when I started humming, “High compression, low compression…” It was train-of-thought; “All gas, no brakes, adrenaline, head rush, no shimmy, no shakes.” It was catchy.

The outro to “Off Your Rocker” is hilarious, with the conversation where a girl is asking questions and the guy she’s addressing is trying to answer.
Oh yeah, that’s my wife and her friend; they were in the studio that day, so I said, “I’ll come up with some lines and cue you with my hand.” They had no problem doing the interruptions (laughs). It was just a fun outro bit that was easy to catch.

If it weren’t for the pandemic, might this have been a Stray Cats record?
That could have happened, but Lee [Rocker] kind of beat me to the punch when he put a record out. So I sat around and wrote songs just to see what would happen, then it was simple enough to think “I’ll just go demo them.”

Do you play guitar every day?
Oh, yeah. I roam around the house and pick up a guitar all the time. Then I might ride my motorcycle to the hardware store, come back, and pick up a different guitar. That’s how I get ideas. I might get one on a long motorcycle ride; I’ll think “I’ve always wanted to try that Bb with a different key,” then I’ll come back and fiddle on a different 6120. I’m always twanging on them.

Do you still buy a vintage guitar or amp when you see one or hear about one you want to try?
I still buy, yeah. It’s funny, I have some things… there’s a group of guitars that I won’t sell, and they’re all Gretsches and they’re part of me. But I do get smitten with other guitars – I still have the bug (laughs). I bought a beautiful ’56 Les Paul with the Tune-O-Matic, and it plays similar to a Duo-Jet, but those P-90s give it a sound I really like. I love that guitar with flatwound .011s. I also just bought an acoustic Super 400. I love those big old jazz boxes, and what a sound out of that thing!

Where did you find them?
I got the Les Paul from Dave Davidson at Well Strung Guitars. He’s got the craziest things and he’s a straight shooter. It’s weird to buy something sight-unseen, and I have been ripped off in the past – I’ve spent my life learning how to play, not really caring what bridge should be on a guitar or if someone changed the Tone knob. I don’t look at instruments like that. I pick them up and feel them. I don’t look to see if something has been changed. So, I have to get a feel for a dealer. A couple other good ones are Elliot Rubinson from Rumbleseat Music and Gary Dick, from Gary’s Classic Guitars. There are very few guys I buy from.