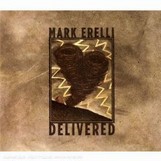 Fearing negative comparison, some singer/songwriters shy away from covering other writer’s material. Some, boring people by the dozens in coffeehouses across the country, feel it’s everyone else who comes up short. Mark Erelli falls into neither category. He’s musician (acoustic, electric, and resonator guitars, harmonica) and singer enough to handle someone else’s best, and writer enough to come up with the excellent tunes that make up this, his sixth and possibly best album.

Erelli, a folk singer with an alt-country/rocker’s sensibility, writes savvy, interesting, often touching songs that are candid without being whiny, getting his feelings across in a way that is imminently relatable. He’s equally effective addressing larger issues and non-personal themes. “Volunteers” (co-written with Peter Nelson), a song about the conflict in Iraq, is unmistakably supportive of the men and women fighting there and perceptively realistic about the war itself.

Similar to John Hiatt in attitude if not style, the 33-year-old Erelli makes grown-up music with the verve and enthusiasm of an 18-year-old. The catchy, inspired hook of “Five Beer Moon” and the measured crescendo waltz of “Not Alone” will remind even the pickiest listeners that music can be smart and relevant and moving without sacrificing rhythm and joy. By the time Erelli gets to the simple darkly magnificent title song it’s been long confirmed that Delivered and Mark Erelli have something to say and a unique, poetic, compelling way of saying it.

Marty Stuart and His Fabulous Superlatives