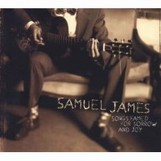 The hoodoo factor in Samuel James’ music is strong. He is very connected to the eerie, mythical nature of early 20th-century country blues, his music conjures up images of Ol’ Scratch in his city-slicker high-button shoes, box-back coat, checkered pants, and Stetson, sipping iced tea and picking his guitar on the porch. Just who would tune whose guitar at the crossroads?

James, whose Kurt Cobain-ish singing voice teeters on the edge of franticness, is one of a growing number of young African-Americans now embracing the blues after times when some saw that music as a painful reminder of America’s too-recent past. On Songs Famed for Sorrow And Joy he forges the history of music and culture into a remarkable album. James’ prowess at all sorts of guitar playing – from fingerpicking to gutsy, powerful slide – is stunning. He even incorporates banjo – which was once more a part of blues music as the guitar – into his one-man acoustic tour de force. An intelligent, imaginative writer with an ear for melody, James writes with wit and color; his sometimes chilling, sometimes amusing narratives of “One-Eyed Kate,” “Big Black Ben,” and “Ol’ Willie Chan” are laid over astounding fretwork. There’s force and confidence in his playing; a surety in the blues that can’t possibly come from someone only a few years out of high school; and from Maine, no less! But it does. Samuel James is already a great player; with time he may show himself to be one of the best since they stopped making 78s.