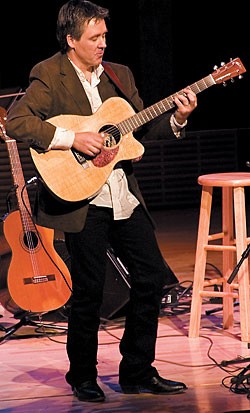 If such an award was given, Nashville-based guitarist Pete Huttlinger’s third solo album could be nominated for the “Most Unique and/or Obvious Album Title Pun,” as his Fingerpicking Wonder is a tribute to singer/songwriter Stevie Wonder.

Huttlinger was interviewed in VG‘s July ’01 issue, following the release of his first album, Naked Pop, which consisted of covers of hit songs. His second album, The Santa Rita Connection, combined three covers with 10 originals.

“I really felt like Santa Rita was my breakout CD,” Huttlinger recently told VG. “It featured me writing tunes in different styles, and I did all the arranging and recording myself.”

There was also Things Are Looking Up, which included more ensembles with other players. “It required actual composing rather than handing everyone a lead sheet and seeing what they came up with in the session,” Huttlinger said of it.

A resident of the Music City for more than 20 years, Huttlinger has developed his craft, but participated in less session work due to his solo career.

“I’ve done some work here and there with some small labels,” he detailed. “I worked with Lori Mecham, a jazz pianist, on some Brazilian-type stuff. In my own studio, I do tracks for all kinds of people all over. I’ve recently sent music to Colorado, New York, and L.A. I’ve kind of shifted my goals with the recording thing – there hasn’t been much big-name stuff, but it’s been a steady stream of work, and I’ve realized that my strength is in performing.”

The fingerpicker has also developed a musical association with singer LeAnn Rimes.

“She and I do special-event things,” Huttlinger said. “I don’t tour with her, but we did some songs for a show called ‘Live From Abbey Road,’ and I’ve done several other TV shows and a few performances with her.”

Huttlinger’s own performances have included more than one gig at New York’s Carnegie Hall.

“I did a trio thing there,” he recalled. “There are three performance halls at Carnegie, and we were in the mid-size one. The promoter liked what I was doing, so he asked me to open for a band he was bringing in later, in the huge main hall.”

Fingerpicking Wonder marks a return to solo acoustic turf. A longtime fan of Stevie Wonder, he spent a lot of time selecting tunes for the album.

“I wanted to pick tunes that people would know, because I wanted them to hear a different take on familiar songs. But I also wanted to pick tunes I was intimately familiar with. I have the opportunity to make a bigger statement if I take a tune like ‘I Wish’ and do it as an instrumental. If it’s familiar to a lot of people and they hear it in a different way, I have a chance to make a bigger impact.”

Wonder’s songs, he added, are more intricate and elaborate than many realize. “They’re deep musically and lyrically, and they’ll be around for a long time,” he averred. 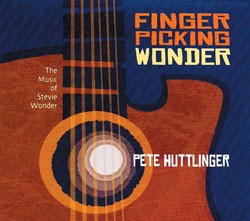 Huttlinger used four Collings guitars on Fingerpicking Wonder – a D-1A, OM-1A, OM-1C, and an OM-2H. The album’s song list includes info on the instrument used on each track, its tuning, and the key.

“The OM-1C is my main road guitar, but when recording, I like having several to choose from,” Huttlinger noted. “I like my D-1A because I love a good dreadnought.”

The album’s opener, “I Wish,” exemplifies Huttlinger’s prowess, as the bass line and melody are played simultaneously, though he added second-guitar “chord punches.”

“I was just trying to produce a great track,” he said. “I initially recorded it as solo guitar. And when I first added those bits of second guitar, I didn’t like the tracks. But when I went back and listened, I decided it sounded really cool.”

Of the 10 selections, three – “Superstition,” “Sir Duke,” and “Overjoyed” – were on previous albums, but Huttlinger was determined to perform them better this time.

Were there any songs Huttlinger wanted to record, but didn’t?

“I really wanted to do ‘As’,” he noted. “Stevie’s version is so amazing, with the chorus in the background. I wanted to do something similar – a chorus with a solo guitar – but I ran into budgetary constraints.”

Huttlinger is already at work on his next projects, which include an album of Celtic-style music and a story-type concept album. Asked if he’s satisfied with the way his career has developed, he chuckles and says, “When I first got here, I didn’t even dream about playing Carnegie Hall!”


This article originally appeared in VG‘s August 2009 issue. All copyrights are by the author and Vintage Guitar magazine. Unauthorized replication or use is strictly prohibited.
Pete Huttlinger’s Impossible Arrangement