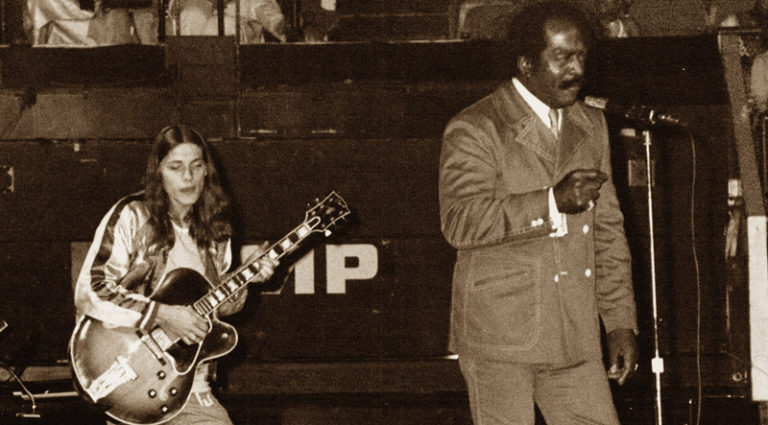 “Who is this kid?” gasped incredulous attendees of the Guitar Explosion festival at the Hollywood Bowl in June, 1973. It was a typical summer day, but the concert was anything but; an expectant audience there to see Roy Buchanan, T-Bone Walker, Shuggie Otis, Kenny Burrell, Joe Pass, Herb Ellis, Mary Osborne, and Jim Hall was astonished and mesmerized by this unknown guitarist, barely in his 20s, who exhibited the mastery, maturity, and soul of musicians twice his age. And the tone he produced on a large jazz box through an overdriven tube amp was truly otherworldly.

Ford was born December 16, 1951, in Woodlake, California, a rural community in the San Joaquin Valley. Two years later, his family moved to Ukiah, where he was raised and schooled. The third of four sons immersed in music as a youth, he came of age in a musical environment; his father, Charles, was a county-and-western guitarist/singer and his mother, Kathryn, played piano and sang. He studied saxophone at 10 while in the school band and, inspired by Mike Bloomfield and Elvin Bishop of the Butterfield Blues Band, began teaching himself guitar at 13. In the late ’60s, he augmented his self-education in blues guitar with trips to San Francisco’s Fillmore West and Winterland to see masters such as B.B. King, Albert King, Eric Clapton, and Jimi Hendrix. He concurrently developed the jazz side of his personality by listening to John Coltrane, Paul Desmond, Archie Shepp, Yusef Lateef, Roland Kirk, Wayne Shorter, and Miles Davis. Robben learned primary jazz chords from book one of Mickey Baker’s Complete Course in Jazz Guitar, then added advanced and modern concepts by assimilating the piano of McCoy Tyner and Herbie Hancock. These, in turn, informed his compositions and improvisations, particularly in regard to note choices and extended harmony. The amalgam of blues-guitar technique and tone with jazz chordal thinking and saxophone phrasing remains a vital and telling cornerstone of his style. 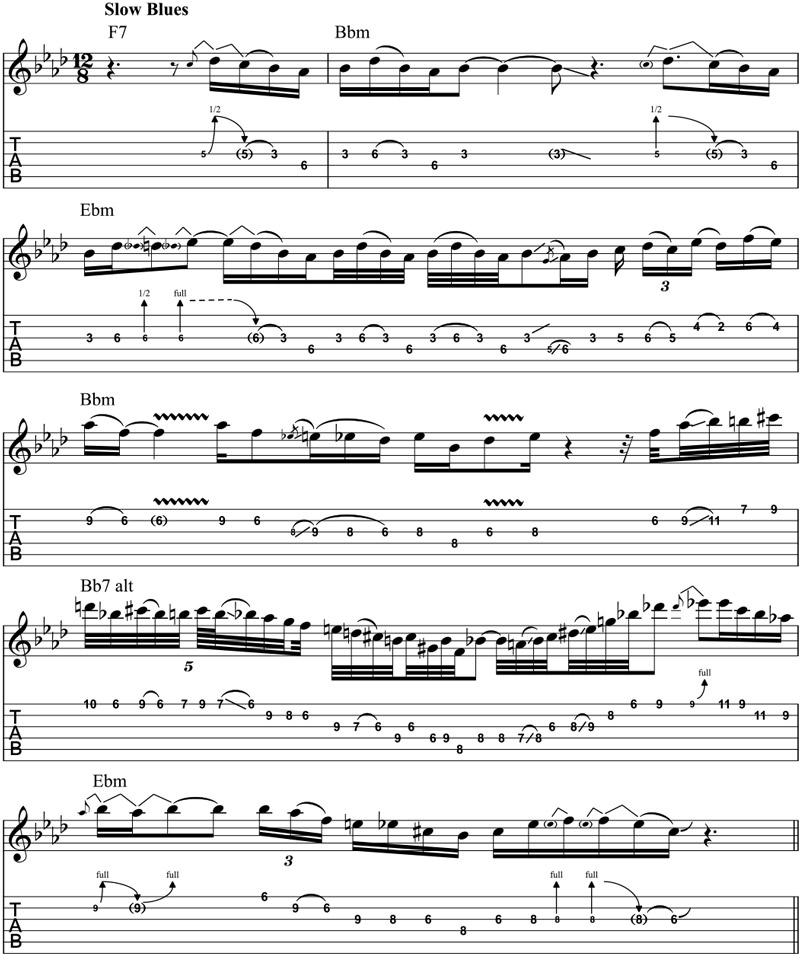 Slow blues is a challenging environment for any performer, given the omnipresent danger of becoming repetitious, formulaic, or mundane. Not so with Robben, who set his soul quotient high early on in a genre where timing, phrase feeling, contrast, and drama are paramount. This is demonstrated by tracks like “Blue and Lonesome,” a minor blues in Bb. This excerpt from his riveting solo has all the right stuff – soulful opening statement built on simple ground-finding motifs and riff-like patterns decorated with slinky string bends and legato phrasing, a dramatic ascending sequence across the barline in measures 2-3 followed by a solid blues-scale line in 4, and a careening bebop phrase to usher in the iv chord, Ebm, in 5. The latter finds Ford exuding the energy of a jazz sax player with blistering double-timed rhythms and his foray into exotic diminished-scale sounds to express the Bb7 altered-dominant chord before resolving to a contrasting traditional blues melody in Ebm in 6.

After graduating high school in 1970, Ford moved to the San Francisco Bay Area and formed the Charles Ford Band (in honor of his father) with brothers Pat (drums) and Mark (harmonica). The group specialized in harmonica-driven electric blues and recorded sporadically for Arhoolie before Robben (on sax and guitar) and Pat joined labelmate Charlie Musselwhite on a national tour. Robben appeared with the Chicago blues singer/harmonica player on Takin’ My Time and captivated listeners with his playing on the title track and cuts like “Love Me or Leave Me,” which sported an early lead-vocal from Robben. He left Musselwhite’s group in mid ’71 to form a second Charles Ford Band, which added bassist Stan Poplin and found him handling lead vocals and doubling on guitar and piano. The quartet recorded an eponymous album in ’72 with gems like “Blue and Lonesome” (henceforth a staple of Robben’s repertoire), “Reconsider, Baby,” “My Time After Awhile,” “Black Night” and the irrepressibly swinging “Gibson Creek Shuffle.” Robben’s growing interest in jazz prompted him to assemble another quartet with keyboardist Paul Nagle, Stan Poplin, and drummer Jim Baum. This group featured the leader on guitar and tenor sax, and performed a potpourri of blues and jazz-rock that foreshadowed his approach of the coming years. The evocative ballad “You Don’t Know What Love Is” and the modal “Eighty One” found Robben turning in lengthy, expressive sax performances while “Oh Gee,” a 44-bar blues-with-a-bridge, struck a balance between uptempo swing and bebop tangents. “Miss Miss” and “Sunrise” (two ambitious Ford originals) hinted at his late-’70s fusion work and flaunted virtuosic jazz-rock chops tempered by his ubiquitous blues aesthetic. These tracks originally graced his now out-of-print ’72 albums as a leader – Discovering the Blues (Live) and Sunrise – and were gathered on the compilation Robben Ford Anthology: The Early Years.

In ’71, Ford began performing with Jimmy Witherspoon, a seasoned blues veteran 28 years his senior. “Spoon” was impressed by the teen’s sax playing after Ford’s quartet opened a show in Northern California, and raved about his musicianship; because he brought a guitarist for the concert, Ford played only sax that evening. However, that date marked the beginning of a relationship that blossomed and bore fruit in the blues world and beyond. Spoon hired his band and became a mentor and advocate. 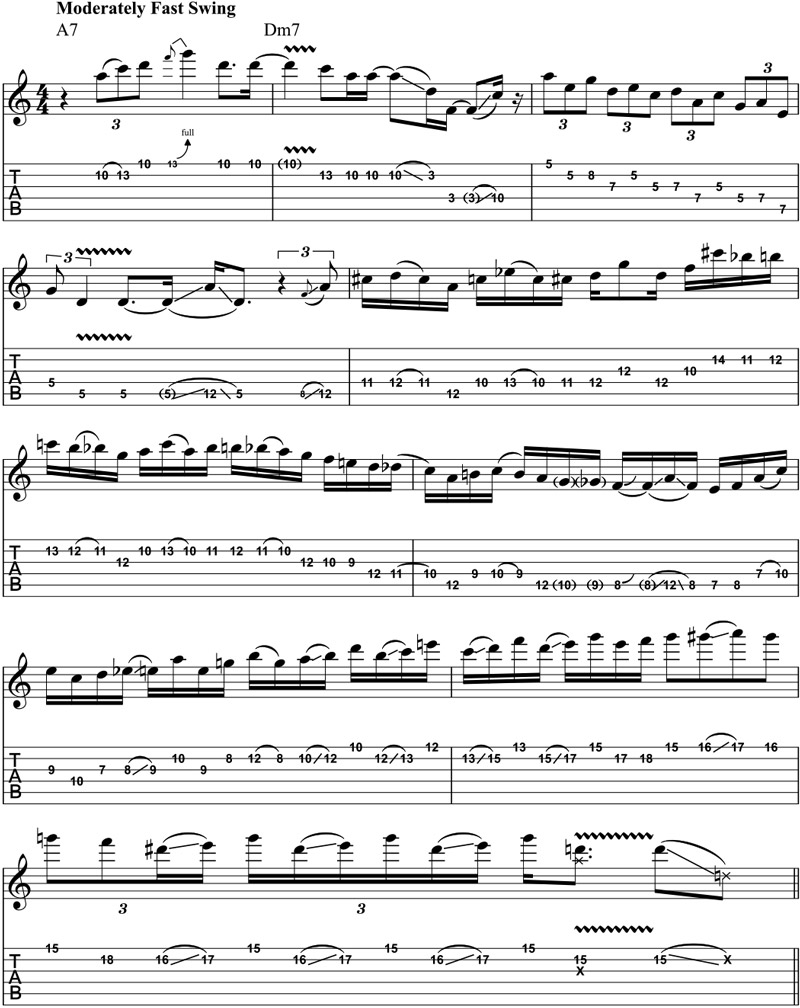 The saxophone experience and jazz influences of Ford’s formative years informed the fusion pieces in his repertoire. “Sunrise” was an early portrayal of his blend of modern jazz, rock, and blues, and depicts his comfort with mixing diverse elements in a swinging, largely modal context. This example, played over a Dm7 chord and its extensions, begins with pentatonic blues lines enlarged with string bends and his signature slurs, which mirror sax drop-off embellishments. Note the use of Am pentatonic over Dm in measure 3 – a common jazz substitution. Here, he exploits a two-against-three phrasing in the triplet groupings. The long, double-timed phrase in 5-10 is filled with harmonic twists and turns. Check out his chromatic enclosure figures and bebop-scale cells used to outline chords and stretch the Dm tonality in 5-7. Measure 7 restores the Dm modality just long enough to begin a climactic ascending sequence in 8-9 that culminates in a bebop lick closely associated with Charlie Parker in 10.

Ford moved to L.A. to work with the singer and they toured the U.S. and Europe for the next five years. By contrast, with Musselwhite’s raunchier traditional Chicago style of blues, Spoon’s urbane approach welcomed Ford’s evolving blues/jazz fusion inclinations. These aspects had surfaced and been documented on The Charles Ford Band, but were cultivated, nurtured, and grew exponentially in the environment of Spoon’s band. He was afforded a showcase in the concert’s opening segment (before the leader took the stage) and was given extensive solo space throughout. “Kansas City,” from Live Jimmy Witherspoon & Robben Ford, is a representative piece that reveals Robben’s increasing comfort and acumen in blending jazz elements with straight-ahead blues (to see great examples, search youtube for Robben Ford and Jimmy Witherspoon/“Black Omnibus” and “One of a Kind”).

By ’73, Ford had become a well-kept secret. With the help of Spoon’s management, that was remedied when he was inducted to the all-star lineup of the West Coast Guitar Explosion concert series in San Francisco and Los Angeles. The emerging virtuoso played alongside established icons in jazz, blues, and rock accompanied by a stellar rhythm section that included bassist John Heard. In that period, Ford began to make inroads; he was seen by Tom Scott and members of the L.A. Express, which he would join after leaving Spoon’s band. This step facilitated Ford’s move into the world of session playing that would soon put him in the company of musicians like Joni Mitchell and George Harrison. Schizophonic, an unofficial album, was a tentative effort as a solo artist, reputedly recorded for $100 per player. Conceived as a soundtrack for a low-budget film, it collected a batch of fusion-oriented Ford originals. Though Ford remains largely dissatisfied with the release, it remains an indicator of his composing and performing talents in the jazz-rock genre, and set a tone for future developments.

A question many ponder is why Ford, a forceful blues-rock-jazz player, gravitated to large archtop guitars in the period. But that sound is part and parcel of the effect he had on the Guitar Explosion audience. To those listeners, it was obvious he harnessed the overlooked attributes of an ungainly hollowbody jazz instrument to produce a highly identifiable fusion tone. 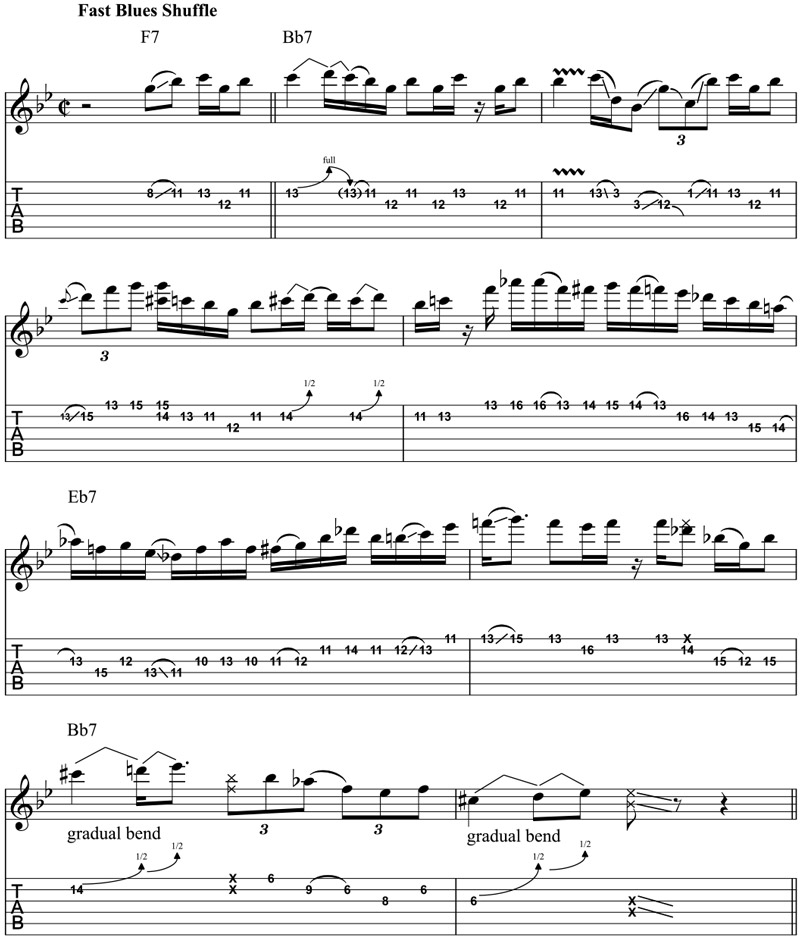 “Kansas City” is a hardy 12-bar blues standard that has survived myriad treatments, from Nat Cole to the Rolling Stones as well as countless blues and soul-jazz artists. In Jimmy Witherspoon’s set, the piece assumed a high-energy fast-shuffle groove, and Ford rose to the occasion with an exemplary solo, skillfully balancing traditional blues and jazz elements. He begins this chorus with Bb major-blues melodies decorated with bends and those patented slurs. In measures 5-6, he handles the move to the IV chord (Eb7) with a long double-timed 16th-note line replete with bebop chromaticism. His final phrase over Bb7 returns to a complementary blues mood made more emphatic with the soulful gradual string bends imitated in different registers in 8 and 9.

“My first really good electric guitar was a Guild Starfire III,” Ford said. “It’s a thinline, like a 335, but hollow with a single sharp cutaway and single-coil pickups. It’s weird because I was going for the sound of Mike Bloomfield on Butterfield’s first album, and he was using a Tele. But I heard that warm, thick tone from the bass pickup and the bright, open tone from the treble pickup on the Guild. I was also listening to a lot of jazz guitar – Kenny Burrell, Jim Hall, Wes Montgomery – and wanted to be a jazz guitarist. So, I thought I had to have a big Gibson archtop. For blues, they seemed fuller, louder, and more-resonant. I traded my Guild for a new Gibson L-5, around ’70. That’s what I played with the Charles Ford Band.

“The next archtop was a used Super 400 I got with Spoon, around ’72,” he added. “It had the Florentine cutaway and thinner neck, so it was probably a ’67 or so. I fastened the bridge down with electrical tape so it wouldn’t move when I bent strings. Later, I pinned it to the top with screws. With that guitar, I used light-gauge Ernie Ball strings and a medium pick; I often picked with the side or the round end. I played the Super 400 mainly on the bass pickup with the Tone all the way up through a blackface Fender Super Reverb turned up loud. That combination would sound great today! Before the Super, with Charlie Musselwhite, the Charles Ford Band, and with Spoon, I used a blackface piggyback Fender Bassman. That’s the amp I played on the televised Witherspoon concert.

“One guitar that’s never mentioned in my history is the ES-345 I bought from Elvin Bishop for $300. He played a dance at my high school in Ukiah, at the start of his solo career after leaving Butterfield’s band. He also worked at a club nearby and I got to know him there. Some nights, there’d be no one in the audience, and I’d hang out with him between and after sets. Eventually, I heard he was selling a 345. He was living in a back room at the Keystone Korner club, in San Francisco, and I went to see him. He sold the guitar to me without getting out of bed (laughs). Though my main instrument was the L-5 at the time, I played that 345 on Charlie Musselwhite’s Takin’ My Time album.”

Wolf Marshall is the founder and original Editor-In-Chief of GuitarOne magazine. A respected author and columnist, he has been influential in contemporary music education since the early 1980s. His books include 101 Must-Know Rock Licks, B.B. King: the Definitive Collection, and Best of Jazz Guitar, and a list credits can be found at wolfmarshall.com.