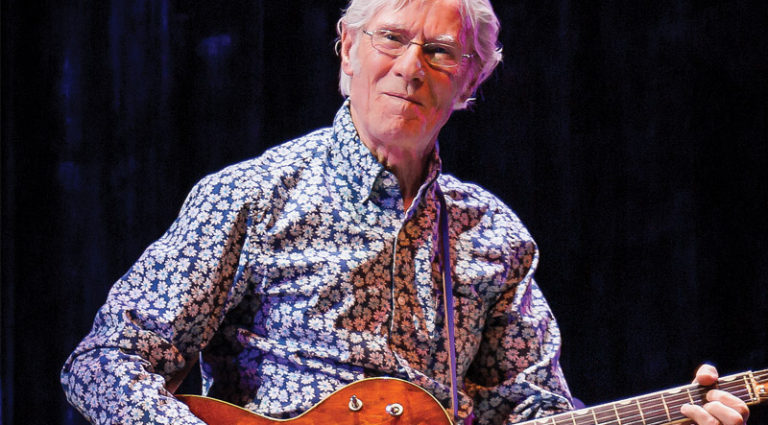 “The first song I learned on guitar was ‘House of the Rising Sun’ by the Animals.”

The statement could have come from literally thousands of fledgling guitarists in ’64, when the record shot to #1, or in the decades since. It was the perfect vehicle – five chords, each arpeggiated so you heard every note clearly.

Hilton Valentine played guitar and came up with the memorable intro. The founding member of the band died January 29 at age 77.

In a span of two years, the Animals’ original lineup released a string of rock classics like “We Gotta Get Out Of This Place,” “It’s My Life,” “Don’t Let Me Be Misunderstood,” “Boom Boom,” “I’m Crying,” “Bring It On Home To Me,” and “Don’t Bring Me Down,” the latter featuring the guitarist’s prominent fuzz tone. “See See Rider” contained one of the gnarliest solos in guitardom, with Valentine bending (or strangling) a single note 20 times in a row.

“It really was Hilton who made the early Animals a rock band, because I don’t think the element of rock was in the band until we found him,” Burdon told writer Tom Guerra in 2005. “In those days, Hilton wasn’t just playing rock and roll, he looked rock and roll. Here was a guy with the greased mop of hair combed back, cheap leather jacket, winklepicker shoes, black jeans, and a smile on his face, playing through an Echoplex.”

Valentine picked up guitar at 10, a fan of Buddy Holly and Lonnie Donegan.

“Skiffle was the main influence at the time, because it was the easiest to play on guitar,” he told Guitar Player magazine in 1983. After fitting an acoustic with a pickup, he got a Rosetti Lucky 7 solidbody, then a Höfner Club 60.

Influences included the instrumental sounds of the Ventures, Duane Eddy, and England’s Shadows and Bert Weedon, as well as John Lee Hooker. His group, the Heppers, played backyard shows with washboard, tea-chest bass, comb-and-paper, guitar, and a plastic sax that only had one note working. The Wildcats followed, with future Animals roadie Tappy Wright on rhythm.

When he sat in with the Alan Price Combo, the band asked, “Can you turn the echo down a bit? Can you turn it off altogether?”

The inspiration for recording “House Of The Rising Sun” came from Bob Dylan’s debut LP. On his Gretsch Tennessean, 21-year-old Valentine began arpeggiating the Am-C-D-F chords, then to E in the repeat, but Price said, “That is so corny. Can’t you play anything else?” Valentine’s retort? “Just play the organ! It may be corny, but it’s good.”

Ironically, Price was given arranger credit for the public domain folk song – therefore he, not Hilton, received the royalties.

Following a re-release of “Rising Sun” that reached #12 in the U.K., the band recorded The Ark in ’83. Summing up his style, Valentine said, “It was a thing of playing what you felt, and the solos I played with the Animals were what I felt. There wasn’t any technique. All of the solos, live or on record, just happened with no forethought at all. Maybe that worked in my favor, because I was so simple, so basic, I was right for the Animals.”

Rickenbacker gifted him six- and 12-string models, and he also used a white teardrop Vox Mark 12 and  a ’66 Telecaster.

Prior to The Ark, he’d gotten out of music and didn’t even own a guitar. Instead, he managed a theater/restaurant in Hollywood. On the ’83 tour, he used guitars borrowed from Wright, who was also Jimi Hendrix’s roadie – meaning the SG Custom and Fender Mustang were Jimi’s!

In recent years, Valentine gigged with roots bands the Headless Horsemen and the Woggles, and returned to skiffle, forming Skiffledog, which released two albums. In 2007 and ’08, he again toured with longtime friend Eric Burdon.

His last musical project was co-writing “Impeachment Day,” recorded by the RAF Irregulars (members of the Waitresses, Headless Horsemen, Nadasurf, and Lulu Temple). Both acerbic and celebratory, it takes aim at the recent political climate over an upbeat ragtime/Dixieland groove.

The Horsemen’s Chris Cush recalls, “One time, we booked a gig with Hilton at the Brooklyn Bowl and had been doing rehearsals. He’d been having health issues, and when he showed up in a body brace we were all concerned he wouldn’t be able to do the gig. But when he put on his Telecaster and plugged in, he was 20 years old again. Big grin. We started with ‘I’m Crying,’ and Hilton just killed. Music kept him young.”

Quotes are from Guitar Player magazine, April ’84, by Dan Forte, unless otherwise noted.