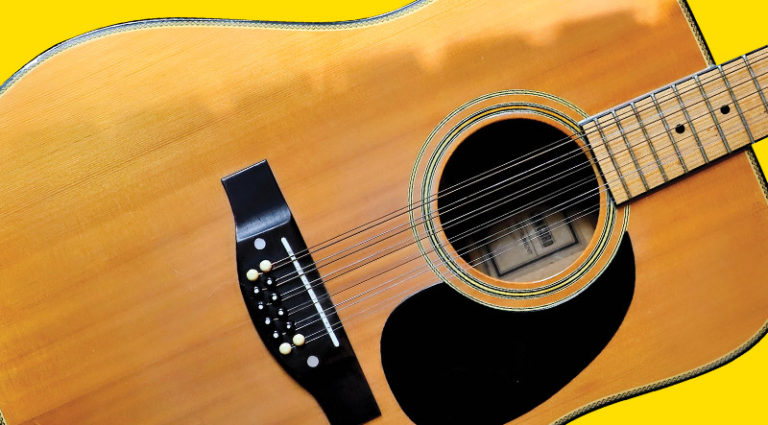 I have collected several Fender Wide Range humbucking pickups from the early ’70s, and I’m curious about how to check whether they’re set to factory specs, and then how to adjust the pole screws for best sound, particularly those on the bottom.

Is there any science to adjusting the screws, and what is the best height? Also, is there a spec for how far they were supposed to protrude from the bottom? – Thomas Cole

Pickup builder Jason Lollar is an expert on the Wide Range, and created the technical drawings for many of the parts being sold to winders who now make similiar pickups. Here’s what Jason said about adjusting them.

“Setting the poles is more of a mechanical issue than a specification. And, though it looks like there are three offset poles per coil, there are actually six.

All of those I’ve taken apart were set up the same way, and those adjusted from the bottom – the hidden ones – were set flush with the top of the bobbins. Gently screw those in until they hit the pickup cover, then stop (so you don’t bend the cover).

Those you adjust from the top are normally flush with the top of the cover. I’ve seen some where the pole pieces had been removed then put back in randomly, without attention to magnetic polarity. This left the pickup with south-up and north-up in the same bobbin, which gives certain strings very low (or no) output.

These pickups have weak magnets, so you can move them closer to the strings, and of course the bridge can go closer than the neck if the guitar has two. At the neck position, you could get as close as 1/8“, though I prefer about 3/16“. If you get poles too close, you can pull higher overtones out of tune, which gives a sour tonality. Worse, you could get an odd, wavering sound. Remember, the poles are magnets, and the reissues Fender made in the last 10 years were designed like a typical Gibson humbucker, with a single bar magnet and polepieces that are plain steel screws and slugs. They’re very different-sounding. The original Wide Range have a Fender-like splashy, spanky sound. The reissues use a lead wire with a plastic jacket and wire held to the bottom of the pickup using bent metal tabs attached to the base plate. Originals look more like the braided wire used on most Gibsons, and there are no tabs on the plate for strain relief. Finally, the embossed Fender logo is very light on the originals, but far deeper and more visible on the reissues.”

In December’s “In Memoriam” column, the picture of Spencer Davis shows him playing a natural-finish Harmony Stratotone. On the following page, the interview Joey Molland interview shows him with the same guitar. Could it be? It sure looks like it – bound neck, block inlays, foil-top pickups, gold knobs, trapeze tail, black pickguard, white pickup selector. Is Joey Molland now playing Spencer Davis’ Harmony? – Billy Soutar
We asked Joey, and he was kind enough to respond.

“Sorry, but no, it’s not the same guitar,” he said. “Spencer and I were friends over the years and we both loved the Stratotone. I first saw one right around 1960, in England, and got one many years later – I still have it and it’s my favorite guitar to play around the house and on sessions here and there, but I never take it on the road. They are great guitars – as good as anything I’ve ever played.”

I left my Takamine acoustic and ’80s Telecaster at my parents’ house on the Florida Coast while I spent a year in Germany. When I returned, my parents had moved them from an air-conditioned area of the house to the garage. When I opened the cases, the frets on both were covered in green funk, and the Tele sounded terrible. I metered it, and the signal is weak with very little bass. I’m removing the green stuff, but what about the Tele’s pickup? – James Weakley
Unfortunately, the salt air had its way with your guitars. Moisture has gotten into the pickup and formed rust, which caused many shorts in the windings. The pickup will function for a while in a diminished capacity until it finally quits working altogether.
Re-winders typically charge $70 to $100 for a Tele bridge pickup, so take that into account as you decide to re-wind or replace it.

I’d like to know more about my 12-string guitar. What can you tell me by looking at pictures? – Kathy Moore
It’s a 1976 Ibanez Concord 670 12, with an interesting maple neck/fretboard. We showed your photos to VG contributor Michael Wright, who is an expert on import instruments.
“The back and sides are almost certainly laminated, though it’s not plywood. Japanese makers learned early on that their guitars didn’t travel to North America very well, as solid woods often cracked. Like Panormo and other early makers, they would take two pieces of wood, usually reverse the grain, and glue them together. The better models had solid-spruce tops, while lower models were laminated, and all laminated-top guitars were tuned just like the solid-tops, making the sound pretty good.”

Zac Childs is a guitar tech in Nashville. If you have a question about guitars – anything from nuts and bolts to historical or celebrity-related inquiries – drop a line to him at zac@askzac.com or visit facebook.com/askzac.