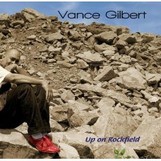 Vance Gilbert is a true student of the art of songwriting, and his latest CD demonstrates his fervor for composing is as powerful as a Colorado thunderstorm.

Although Up On Rockfield isn’t a concept album – one long story broken up into individual chapters or songs – it does have an overriding theme. Each song is arranged as if co-written with one of his musical heroes. On the opening/title track, Gilbert goes for Van Morrison’s mid-’70s Celtic soul, while the second track combines the attitude of John Hiatt with the groove of Prince. Other phantom collaborators include Shawn Colvin, Raffi, Tom Waits, Bruce Springsteen, Steve Earle, Richard Thompson, Al Jarreau, Lynyrd Skynrd, Thomas Dorsey, and Bob Dylan. “House of Prayer” is an actual co-write with Lori McKenna.

Gilbert accomplishes the seemingly impossible by not only successfully channeling the essence of his mythical co-writers’ styles, but by creating songs that stand on their own. Even without the musical conceits, each tune works. Throughout the album, Gilbert’s talents come into play. Some, such as “Goodbye Pluto,” highlight his fluid, lilting vocals, while others like “Judge’s House” bring his acoustic guitar skills to the forefront.

Accompanied by an ensemble of drums, bass, keyboards, and electric guitar, the arrangements are minimalist, the songs being the stars. The sound is natural, with just a hint of reverb to keep instruments from being too forward in the mix.

If you appreciate well-crafted songs, Up On Rockfield should be on your must-hear list. I’m sure you’ll spend many hours admiring and enjoying Vance Gilbert’s artistry.