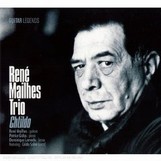 René Mailhes is a holdout. On any night in Paris, you can hear young Gypsy tyros tearing up the fretboards playing hot Gypsy jazz in emulation of Django Reinhardt’s early classics. Mailhes, on the other hand, plays Gypsy bebop, inspired by Django’s all-but-forgotten late 1940s and ’50s recordings. His music is funky and unique, music out of time.

Born in 1935, Mailhes is part of the famous Ferret clan and thus practically has music in his blood. While he may have crossed paths with Django, he never met or played with him. Yet Mailhes’ long career in the French capital has always been informed by the master’s music. Still, he was part of what the Gypsies term “The Gibson Generation” – those who played bebop or cool jazz on a Gibson ES-335 or ES-175 instead of the older generation’s Selmer-Maccaferris.

Mailhes was inspired early on by his renowned guitarist uncles, Baro, Sarane, Matelo, and Challain Ferret. But he also had his ear tuned to the modern American players like Jimmy Raney and Jim Hall, inspiring his choice of the ES-175.

Yet even after playing guitar professionally some 45 years, it was not until 1995 that Mailhes got the opportunity to record. That year, he released his first album, Gopaline, followed by 1998’s Gitrane. They were both tours de force of Gypsy bebop, paying homage to generations past while looking toward the future.

Chtildo is just his fourth album. The songs retain Mailhes’ stylish coolness; he plays slow and sweet, without flash or the need to show off his virtuosity. Instead, the tracks are filled with pure, beautiful bebop lyricism.

Standouts include the opener, a glorious cover of “Stella By Starlight.” The other extreme is “My Wife Mado,” a sublime eulogy to Mailhes recently deceased wife.

They don’t make records like this anymore. Or do they?