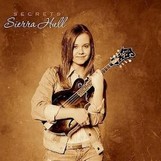 No American musical style is as intergenerational as bluegrass. At festival jams you regularly find 10-year-olds playing with 80-year-olds. Sixteen-year-old Sierra Hull is a product of this tradition. By the ripe old age of eight, she was making the rounds in advanced picking circles at festivals. She debuted on the Grand Ol Opry at 11, invited onstage by Alison Krauss. Since then she has won numerous big-league mandolin competitions and even hosts her own festival in Tennessee. Pretty good for someone who doesn’t yet have her driver’s license.

Hull’s reputation is based largely on her superb mandolin playing, which is more than amply documented on Secrets. But her lead vocals steal the show. With a clear soprano unfettered by extraneous affectations, Hull soars above the music like a hawk in a friendly headwind. Whether it’s an old classic such as “Everybody is Somebody’s Fool” or an original like “Pretend,” Hull delivers direct, forceful interpretations. Many listeners will immediately note the stylistic similarities between Hull and mentor Krauss. But Hull is more than merely a clone; her music displays less pop prettifying. The emphasis is on hot picking and ensemble vocals more than purely beautiful sound.

It’ll be interesting to see where Hull goes, but while we wait, Secrets marks an auspicious beginning for a young woman who is already a bluegrass star.