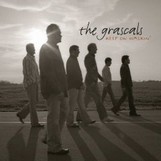 From the kick-off of the opening song, “Feeling Blue,” the Grascals demonstrate that traditional bluegrass doesn’t have to sound old-fashioned. Even on moderate-tempo songs they maintain a driving rhythm that would make any hard-rocker envious. Their spot-on three-part harmonies have a sufficiently gruff edge to keep them from being too mainstream-country slick. The band treads a very thin line between a modern acoustic and the traditional old-style sound, accomplished by combining energy with restraint, and they do this so impeccably, whether it’s a solo, harmony, or backing rhythm part, that you can’t help but be impressed.

With only two co-written original songs, Keep On Walkin’ relies on shrewd song choices to showcase the Grascals’ unique contemporary style. Covers such as Ivy Bryant’s “The Only Daddy that Will Walk the Line” and Merle Haggard’s “Today I Started Loving You Again” have a more organic feel than the originals, but still sound modern. Recently penned songs such as the title cut, “Keep on Walkin’,” retain the feeling of classic bluegrass, but with a contemporary twist.

Without a doubt, the Grascals personify what a great bluegrass band should be – precise, multi-part vocals combined with virtuosic instrumentals. Keep On Walkin’ is so solid it’s positively golden.