Alternative Guitar Summit, produced by Joel Harrison, streams a live concert to honor one of the greatest names in jazz guitar, Pat Martino
The legendary Pat Martino is one of the most important jazz guitarists in the history of the instrument. The Alternative Guitar Summit celebrates the life and music of Martino in a concert by 12 extraordinary guitarists who interpret his compositions.
The Alternative Guitar Summit celebrates living composers / players every year. Despite the pandemic they are presenting a live-stream concert featuring a once in a lifetime aggregation of guitarists who will honor jazz guitar legend Pat Martino by playing his compositions. Five sets of guitar duos will play one duet selection and one piece with a rhythm section. Many jazz aficionados know Martino the soloist but few are aware of the depth of his compositions.
Concert information:
•         March 20, 2021  —  8pm EST
•         Sign up at the Alternative Guitar Summit: Music Festival
Information:  https://alternativeguitarsummit.com/concerts/
•         Registration / “Pay What You Wish”:
https://boxoffice.mandolin.com/collections/alternative-guitar-summit-2021

The concert is presented completely free of charge. However, there is a donation button when you sign up for the show and any contribution will go entirely to the production costs. In addition on 3/20 your contribution will go towards the PatMartino Go Fund Me Campaign.   Donations of any amount and frequency may be made to Pat’s Go Fund Me Campaign at:
https://www.gofundme.com/f/y3czxh-pat-martino-fund
Featured participants:
•         Adam Rogers and Peter Bernstein
•         Dave Stryker and Paul Bollenback
•         Rez Abbasi and Jeff Miles
•         Oz Noy and Nir Felder
•         Sheryl Bailey and Ed Cherry
•         Joel Harrison: solo
•         guest Kurt Rosenwinkel: solo and Howard Paul of Benedetto Guitars

There are a mere handful of guitarists that have changed the way we think about the guitar over the past five or six decades. Pat Martino is perhaps one of the greatest and best-known of those icons. This year we honor his enormous contribution to music.  Now at age 76, after a long, hard, incredibly eventful life, Pat is having health issues and faces financial challenges.  Here is your opportunity to help this living legend of jazz. 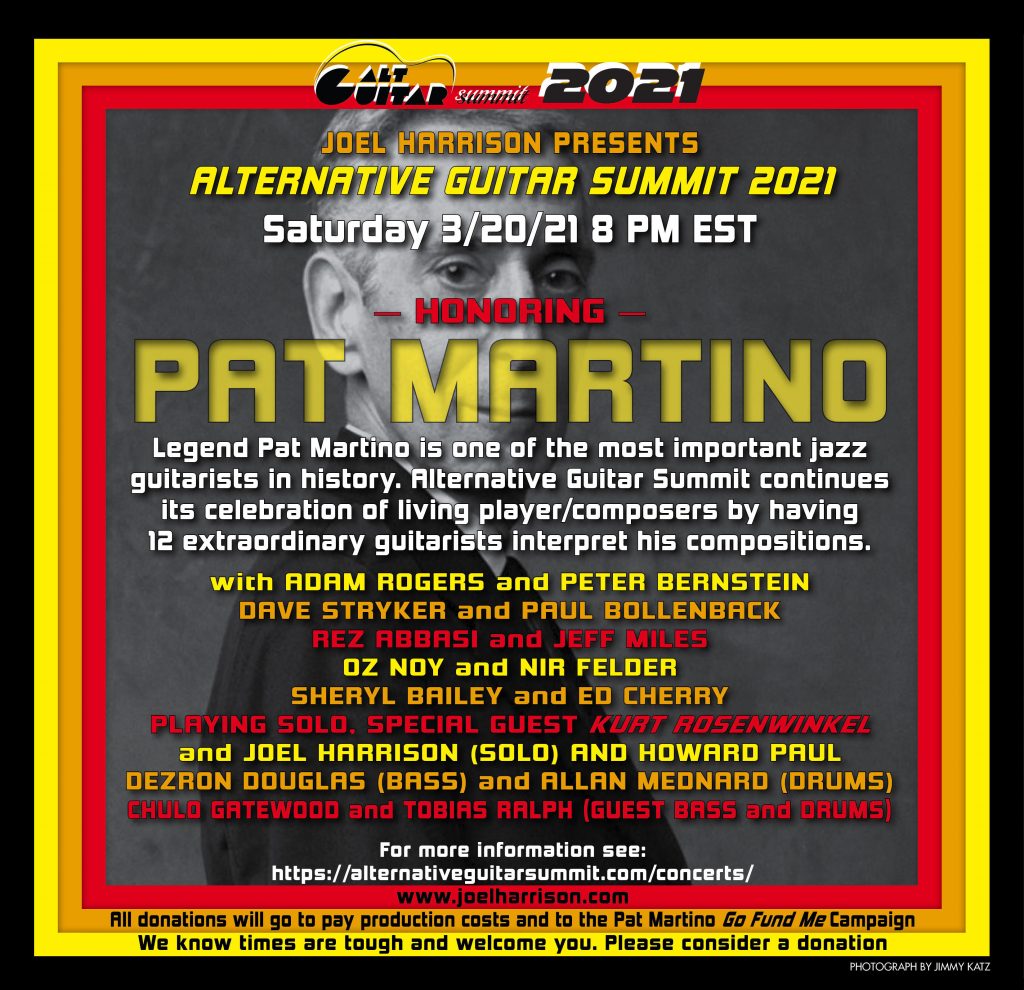