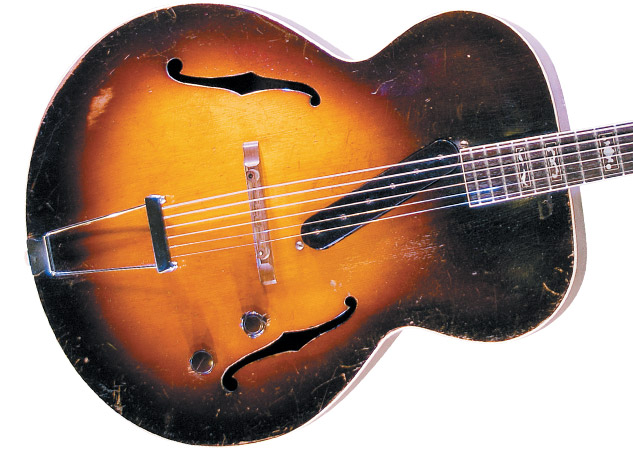 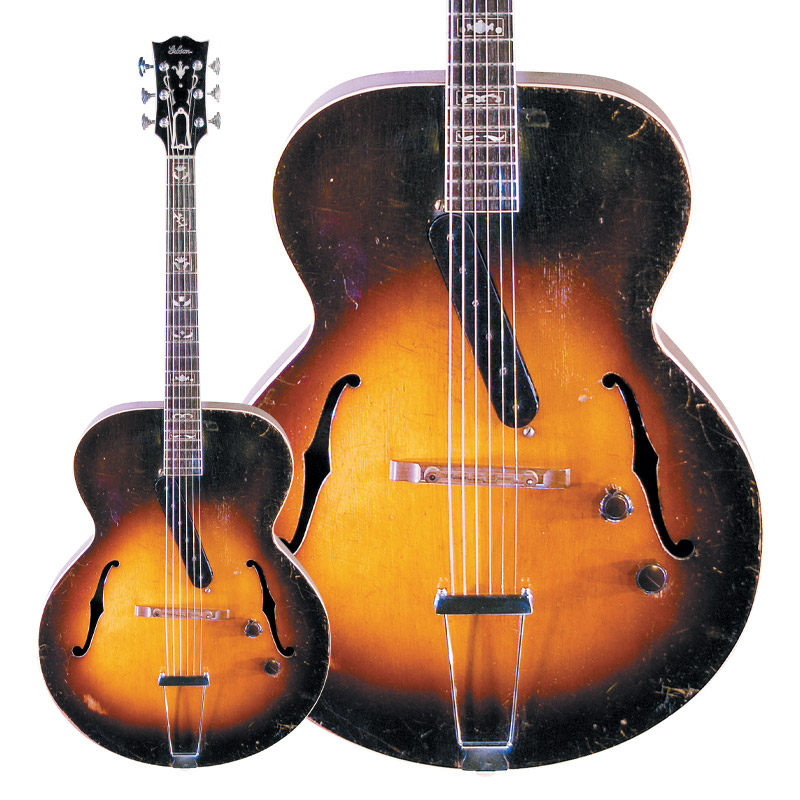 When a guitar junkie hears the words “soapbar” and “P-90,” the mental image is usually that of a cream-colored rectangle seated deep in a sea of metallic gold, accentuating the curves of one of the most beautiful, sexy guitars ever created – the Gibson Les Paul. Combined with its pure, raw, in-your-face tone, it gave birth and voice to rock and roll.

Of course, Les Paul had another sound in mind when he decided to let his name grace the peghead of that first solid slab of Gibson ingenuity. Given all that has been revealed about the accomplishments of Les Paul, it’s rare that a new tile can be placed in the mosaic that forms a picture of his life. But here is such a piece of history.

In May of 1935, Gibson general manager Guy Hart, realizing the newfangled electric guitar craze was catching on, made a move to get Gibson in the race. He enlisted the help of longtime Gibson endorser Alvino Rey, the most popular electric player of the period. The 27-year-old Rey, who had a background in electronics and fascination with design, was teamed with John Kutilek, a radio and audio engineer at the Lyon and Healy manufacturing facility in the West Loop of Chicago. Working together at Lyon and Healy when Rey’s schedule permitted, they attempted to develop a unique pickup that would not infringe on existing designs. Unfortunately (or in hindsight maybe not), they were unable, given Rey’s hectic schedule and limited time, to come up with a successful design (see “Crude Beginnings,” VG, February ’97).

By mid summer, the project was transferred to the Gibson factory, where a young Walter Fuller, head of Gibson’s new electric department, made the pickup functional and fitted it into hollow cast-aluminum electric Hawaiian guitar bodies. By the end of October, 1935, Gibson had shipped its first electric Hawaiian.

While Mr. Fuller was working on the pickup design in Kalamazoo, Kutilek was working on an amp in Chicago. Fuller sent pickups to Lyon and Healy, and Kutilek would tweak the amp design to complement the pickup, staying within industry-established audio specs for distortion. Fuller and Kutilek became good friends and for years continued to exchange ideas.

By the mid 1930s, Gibson had already formed a relationship with Les Paul, a.k.a., Rhubarb Red. He appeared, sporting a Super 400 with what looks to be a black finish, in a photo on a piece of sheet music from ’35, and the same image is used in a 1937 Gibson catalog.

Gibson shipping records are peppered with entries for instruments the company sent to him, including a 1936 L-7, with later-installed prototype ES-300 pickup. Gibson shipped this L-7 (serial number 93713) to Les Paul on March 23, 1939, and he immediately put it to use. In April he was photographed with the Fred Waring Orchestra using it, prior to the installation of the pickup. Unique to this guitar are a very slim-profile neck and later factory-installed Grover Deluxe stairstep tuners, which did not exist when the instrument was shipped to Lyon and Healy October 25, 1936.

A New Direction: The First P-90
In the spring of 1940, Gibson was still using the bar pickup developed in ’35 for their electric Spanish guitars. Most of its competition had modified pickup designs by this time, with the notable exception of L.A.-based Rickenbacker, whose main focus was electric Hawaiian instruments. Gibson’s most formidable rival, Epiphone, had moved from using the Rickenbacker-inspired horseshoe design to the True Balance pickup, which used a single transformer-wound coil with adjustable poles. Across the lake in Chicago, National-Dobro had developed a rectangular, metal-covered unit with two rows of staggered, height-adjustable poles, each with its own coil. Between the coils were two magnets placed in a hum-canceling design, with one set charged with a South polarity, the other North. The use of hum canceling was not new to National-Dobro, which used it in 1933 on the Dobro All Electric.

Gibson’s team, headed by Fuller, had also initiated changes. By late fall of ’37, the dual nickel-steel heavy double bar magnets of the electric Hawaiian guitars had been replaced by a smaller, lighter, cast horseshoe-shaped unit that was attached to the bottom of a now split bar polepiece. The design’s inaugural use was in Gibson’s first electric banjo, custom made for Roy Smeck and shipped November 11, 1937.

Fuller had realized early the need for balancing output from string to string. This is evident in the split poles of the first EH guitars. By early ’38, Gibson’s interest in height-adjustable poles is evident in patent number 2145490, filed April 18. Another variation on the theme was the “designed for height adjustable poles” Charlie Christian-style pickup found in a Gibson-built Cromwell G-6. Yet another example was found in a two-pickup ES-150 shipped May 11 of that year. The instrument was returned to Gibson, where a matching P-90 disguised as a Charlie Christian pickup was installed in the bridge position in early ’41.

In late 1939, Walter Fuller was experimenting with magnets made from the lighter, stronger alloy called Alnico, searching not only for a competitive design, but also proper placement for the best tone in the new generation of ES guitars. The idea for the 6 3/4″ P-90 was to capture “full tonal range,” as close to an acoustic as an electric could get. The length allowed him to span the distance from the end of the fingerboard to the bridge. He positioned it diagonally closer to the bridge on the treble side to capture the highs, and farther away on the bass side for a richer, deeper tone. Utilizing the basics of the original bar-pickup design, this new coil is comprised of an iron core threaded for the height-adjustable polepieces; a top and bottom of tortoiseshell celluloid complete the coils of the new thinner-profile bobbin. The iron core extends below the bottom plate, and along its exposed length are four Alnico magnets. The coil is attached with two screws to a mounting frame, which has threaded inserts and springs at the ends to allow for height adjustment.

This hand-built pre-production unit differs from production examples in a number of ways. The mounting frame shows signs of having been placed in a vice and bent at 90-degree angles, and retains the hand-drawn markings for the holes. The magnets are installed with the North polarities butted next to the iron core. In order to counteract the repulsion of like poles and keep the magnets in place, they are glued to the bottom of the bobbin plate and retained with three brackets. The square ends of the mounting frame have been rounded by hand-grinding. Production mounting frames show rounded smooth bends, as though formed in a press, and have no brackets to secure the magnets. The top and bottom celluloid plates of this early unit are the same size in length and width. Production units have a smaller bottom plate, so the coil can be wrapped with a thin celluloid tortoiseshell cover for appearance, protection, and to help secure the magnets. The heads of the screws used for the polepieces on the early example have been hand-ground smaller than their original diameter, and they are all different sizes and out-of-round. Production examples use stock, slightly larger-headed screws.

No doubt the folks at Gibson had a keen interest in Les Paul as a rising star. His two main electrics at the time were a Gibson ES-100 and ES-150. Les could have been informed about the development of the new pickup on one of his visits to Gibson, hanging out at Lyon and Healy with Kutilek, or could have been told about it on one of his visits to the company’s East Coast showroom, New York Band. But one thing is clear; he took Gibson up on its offer and returned his L-7 to Kalamazoo. Fuller installed his new pickup and on July 12, 1940, Gibson returned the upgraded L-7 to Les Paul.

The Chicago Musical Instrument Trades Show (today known as NAMM) held in late July, 1940, heralded the debut of Gibson’s new electric lineup. The new ES-300, in blond finish, made its formal debut. The new ES-100 and ES-150 would be fitted with a smaller version of the new P-90 hidden under a metal cover next to the bridge. This new positioning gave the guitars a more defined lead tone – Gibson’s response to the changing use of the electric guitar from a background rhythm to the single-note lead instrument Charlie Christian had proven it could be. Electric Hawaiian models were also outfitted with the new design. This point marked the end of regular production for the flagship bar magnet design that had five years earlier launched Gibson into the electric race. It was now firmly in first place.

Robb Lawrence, author of the recently released The Early Years of the Les Paul Legacy, showed the pictures to Paul, who immediately recognized the guitar and said Gibson had installed the pickup for him. After using it for a while, he found he wasn’t fond of the sound, so he returned it. Alvino Rey said the same of his ES-300s, and that he preferred his ES-250 with the original bar pickups.

This and other artist feedback may be the reason for the model’s short life span. Approximately 60 were shipped with the long P-90, making this one of the rarest production instruments Gibson has ever built. By the spring of ’41, the long P-90 had been replaced by the smaller unit which, though still at a slight angle, was placed just in front of the bridge.

As was common practice at Gibson, this guitar was shipped again, on October 17, 1941, to Davitt and Hanser in Seattle. Its new owner had no idea of its place in Gibson history.

Special thanks to Arian Sheets at the National Music Museum.

This article originally appeared in VG‘s October 2008 issue. All copyrights are by the author and Vintage Guitar magazine. Unauthorized replication or use is strictly prohibited.