Without specifically mentioning it, an intriguing headline in The Mustic Trades, dated October 20, 1928, heralded the launch of the first commercially manufactured electric guitar. At the time, the use of an electromagnet to convert mechanical vibrations of a musical instrument into electrical impulses was by no means new; various patents had already been filed that incorporated the same basic principle. Unlike previous inventions, though, Stromberg-Voisinet instruments were developed into a commercial product that was marketed to the public. The Music Trades article explains, “This tone amplifier is electrically operated either by alternating or direct currents. It consists of two major units – an electro-magnetic pick-up and amplifying unit. The electro-magnetic pick-up is built within the instrument and is attached to its sounding board. The unit is connected with the amplifier, which produces the tone and volume required of the instrument.”

The article later refers to use with phonographs or radio receivers, which by this time were being produced with built-in amplification – a fairly new piece of portable technology. The 1929 Chicago Musical Instrument (CMI) catalog contains a full-page ad verifying the availability of this groundbreaking idea. The ad, meanwhile, notes that this two-stage amplifier can be “Operated from light socket alternating current. No batteries required.” In previous years, the extra power was delivered by batteries, many of which were wet-cells. And most employed horns (rather than the now-common diaphragm speaker )that were limited in tonal range. The early units were also heavy, expensive, and sometimes dangerous.

The advent of the new rectifier, along with power-tube technology that ran on available home current, solved the problem posed by the batteries, but not the problems of expense or weight. 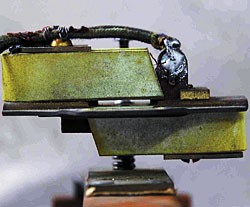 Side of the Stromberg pickup, showing vibration transmission rod and actuator passing between the horseshoe magnet and coil. 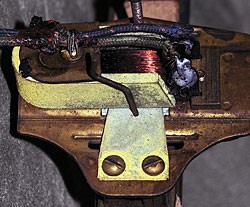 Side view of Stromberg pickup showing actuator slot between the horseshoe magnets. 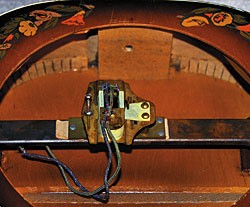 Interior of the guitar, showing the Stromberg pickup and mounting bracket attached to the back.

The original announcement claimed that the Stromberg amplification system “enables the banjoist to play either tenor guitar or guitar, and have that instrument stand out above others in the orchestra.” The 1929 ad does not indicate the amplifier’s output in terms of electric power, but if the weak units introduced just a few years later are any indication, an amplified Stromberg-Voisinet guitar was still no match for a banjo.

Being cutting-edge, the new amplifier and speaker were not cheap, selling for $165, which, combined with the cheapest of their electric instruments (priced at $40) brought the total to $205. It was a princely sum compared to, say, a new automatic washing machine, which sold for $84.50 in 1929, or a three-oven, porcelain-enameled range with a gas broiler and four gas burners, which cost $98.50. Let’s see… upgrade the appliances, or buy a new guitar? The dilemma is as old as the electric guitar itself. And really, $205 was not an extravagant price for a professional-grade instrument. Martin’s top-of-the-line 000-45 cost $170. National’s innovative tricone resonators – loudest guitars of the day – ranged from $125 to $195. Gibson’s top model, the L-5, cost $304, and the company’s top banjo, the Florentine, listed for $500. 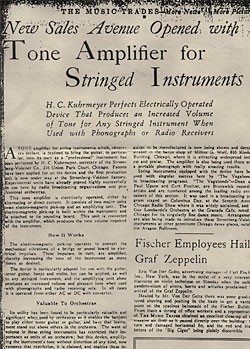 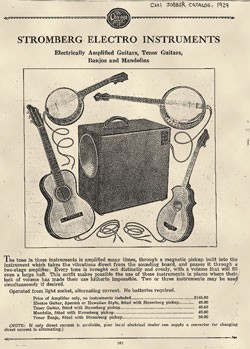 It would be interesting to speculate on what might have happened to this embryonic idea had the stock market not crashed on October 29, 1929. The Great Depression, which didn’t bottom out until March of ’33, put the brakes on production of many new inventions, and no other published reports of this early “tone amplifier” system have surfaced. On the other hand, the Depression was not strong enough to hold back the more powerful, direct string-driven electromagnetic guitar pickup that Ro-Pat-In (later known as Rickenbacker) introduced in 1932. An additional factor in the demise of the Stromberg pickup may have been its weight; it was a heavy unit that, as the article and catalog descriptions indicate, was built into the instrument. When this example was discovered, the mounting blocks had broken from the back and the pickup was held only by the vibration transfer rod attached to the top. The same problem in a fully constructed guitar, mandolin, or violin with glued on top and back would make it seem logical to discard the instrument rather than repair it, particularly if the damage occurred after the advent of more up-to-date commercial electrics. 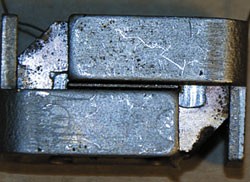 The driver from a 1927 Baldwin speaker showing the actuator between the magnets – the same principle used in the Stromberg pickup. 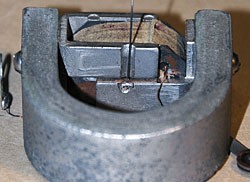 Driver from 1927 Baldwin Speaker showing the vibration transmission rod attached to the actuator. 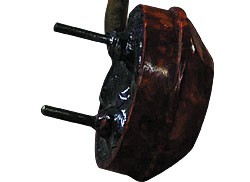 End of the input cable.

The pickup shown here closely corresponds to the October ’28 description in The Music Trades, although it was found in a later faux resonator guitar manufactured by Kay, successor to Stromberg-Voisinet. The ’29 catalog details, “The tone in these instruments is amplified many times, through a magnetic pickup built into the instrument which takes the vibrations direct from the sounding board.” In the price list shown in the CMI ad, all instruments are listed as “fitted with Stromberg Pickup.” For such a unit to be permanently housed in the interior of an instrument, the design would need to allow for adjustments, and this unit was smartly designed for the task. The vibrations from the top are transferred by means of an adjustable metal rod to the metal reed or actuator, which passes between two horseshoe magnets. The actuator, charged by the magnets, vibrates within the center of the coil, which induces a small current that is transferred through the cable to the amplifier. The vibration transfer rod is adjustable for height with a threaded fitting secured to the soundboard. This tension adjustment controls the magnitude of the vibration sent to the actuator. The entire unit has a tilt-adjustment screw that can be accessed through a small hole in the soundboard. This tilt is used to center the actuator in the coil, ensuring it vibrates freely. The entire unit is mounted to a metal bracket that spans the body. The bracket ends are attached to wood blocks glued to the back. Having undergone repair, this instrument still functions.

Adapted Technology
Under close inspection, the transducer mechanism bears a strong resemblance to related technologies of the period. Probably the most striking kinship is with speaker drivers of the mid/late ’20s. The 1928 Music Trades article states that Henry Kuhrmeyer, Secretary of the Stromberg-Voisinet Company, spent some six months at the United Sound Reproducer Company, perfecting the design. At the time, the term “reproducer” was applied to what today is called a speaker, since these devices reproduced the sounds that were electrically transmitted to the unit. The Stromberg-Voisinet pickup appears to be similar to a speaker driver operated in reverse, so it picks up mechanical vibrations and generates an electric signal, rather than transmitting electric signals to a cone, which vibrates, transmitting the original mechanical vibrations.


Special thanks for Walter Carter and Arian Sheets.
This guitar is part of the “Campaign for Volts – Wichita and the Electrification of the Guitar” exhibit at the Wichita-Sedgwick County Historical Museum in Kansas. Learn more at wichitahistory.org.
This article originally appeared in VG‘s September 2008 issue. All copyrights are by the author and Vintage Guitar magazine. Unauthorized replication or use is strictly prohibited.