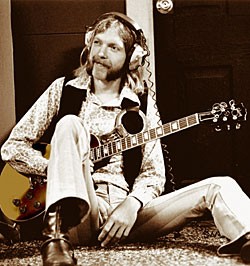 Though he stood in the limelight a scant three years, Duane Allman mastered and changed the art of slide guitar, and became a towering figure in its legacy.

Born in Nashville in 1946, Allman was barely three years old when his father, Willis, a serviceman in the U.S. Army who had been part of the invasion force at Normandy in World War II, was killed by a fellow soldier during an armed mugging. His mother, Geraldine, moved herself and the boys in with Willis’ parents, where the boys were exposed to music via their grandfather and his brothers, who played guitar, banjo, and mandolin.

Geraldine enrolled Duane and his younger brother, Gregg, in a military academy for several years while she earned a college degree, after which she moved her family to Daytona Beach, Florida, in 1959.

Sent to visit his grandparents’ in Nashville one summer, Gregg one day became fascinated by a Bell Tone acoustic guitar he saw propped on a neighbor’s porch. The man showed Gregg how to play “Comin’ Around the Mountain When She Comes,” and the bug had officially bit. Back home in Florida, he took a paper route to earn money so he could buy a guitar from the Sears store. When big brother Duane saw it, his curiosity was equally piqued, and the two took to fighting over the instrument until their mother, sick of the bickering, bought one for Duane. They then helped each other through the rudiments of the instrument before a friend of Duane’s suggested they learn licks from Jimmy Reed records.

Further epiphany came on another visit to Nashville, when the boys attended their first rock-and-roll concert – a bill that included Jackie Wilson, with B.B. King as an opening act. Back home again, they ratcheted up their practices and then scored electric guitars – Gregg a Fender Musicmaster and Duane a Gibson Les Paul Junior. In their early teens by then, they’d joined a band and played to audiences at the local YMCA. And while it had been apparent early on that Duane had the greater natural ability on the guitar, at this point it was becoming an obssession for the young man, who was suddenly paying more attention to the instrument than he did anything else – including his studies. This didn’t sit well with Geraldine, who sent Duane back to the military academy for a spell before bringing him back to Daytona Beach, where he settled in at the public high school briefly before quitting so he could focus on the guitar.

The route to the Allman Brothers Band had been established, and the requisite succession of groups followed, with names like the Escorts, Almanac, and the Allman Joys, the last of which reached a modicum of notoriety in the state of Florida and, after changing its name to the Hour Glass, signed a record deal. The band moved to Los Angeles, where it made two albums for Liberty Records. But between a constantly unsettled relationship with the control-freak label and the fact Duane never took to the L.A. music scene, soon after recording the second album, Power of Love, Duane and the band moved back south, except for Gregg, who stayed in L.A. to fulfill contractual agreements. Though Liberty had limited the number of gigs the band could play in L.A., the circumstances ultimately rendered positive results, as Duane spent many nights watching other acts. Among them was Taj Mahal, whose guitarst, Jesse Ed Davis, influenced Duane greatly with his slide playing on Taj’s version of “Statesboro Blues.” After watching Davis, Duane worked doggedly on his own slide technique.

Back in Muscle Shoals, Duane started a career as a studio guitarist. There, he played on notable recordings including Wilson Pickett’s Hey Jude album. It reportedly was Duane’s idea for Pickett to cover the Beatles’ “Hey Jude.” And later (after his contract was sold to Atlantic Records) in a performance that placed him among the best guitarists of the day, he played slide on Aretha Franklin’s cover of the Band’s “The Weight.”

Looking past the studio work, though, Duane had a vision for a band. So he hooked up with drummer Jai Johnny (Jaimo) Johnson and hit the scene, jamming in places between Jacksonville, Florida, and Muscle Shoals. Eventually, they connected with bassist Berry Oakley and his friend, guitarist Dickey Betts. Part of his vision included two drummers, so Duane snared Claud Hudson “Butch” Trucks to form his tandem drum section. Reese Wynans played Hammond B-3, though his stint, it turned out, would be short-lived.

When they got together in March of 1969 for a private jam, the story has often been told that magic happened. Duane kicked things off with a blues shuffle, and for more than two hours, they were carried along on a meandering exploratory jam. When it finally wrapped, nobody said a word. Duane walked to the door and uttered his now famous phrase, “Anybody in this room not gonna play in my band, you’re gonna have to fight your way outta here!”

The only hitch in their getalong was the lack of a legimate lead singer, a problem quickly resolved when Duane applied his big-brother influence over Gregg. Wynans, knowing the band wouldn’t need a second keyboard player, accepted the reality and bowed out, but stayed busy in the local music scene. Later, Duane helped him score a gig in Boz Skaggs’ band.

The band moved to southcentral Georgia, surviving on checks from the Veterans Administration, money provided by road manager Twiggs Lyndon, and whatever else they could scrounge up. Taking to the road, the band grew ever tighter by jamming on old blues songs or one of Gregg’s original tunes. Along the way, they recorded two albums, The Allman Brothers Band and Idlewild South. In ’71, they recorded several live shows at Bill Graham’s Fillmore East in New York, and released them as The Allman Brothers, Live at the Fillmore East, an album that captured the band’s live feel and garnered it national recognition.

One of the most notable chapters in Duane’s life involved his 1971 meeting with Eric Clapton. Playing a tour stop in Miami, Duane called producer Tom Dowd at Criteria Studios after hearing Clapton was in town to record with Bobby Whitlock, Carl Radle, and Jim Gordon (a.k.a. Derek and the Dominos). Duane asked if he could stop by the studio after the ABB gig to watch Clapton record. Hearing of the request, Clapton told Dowd, “I want to see him play!” And off the two went to the ABB show.

Though the Allman Brothers continued on its tour, Duane returned after shows in Pensacola to play on all but four tracks on the seminal Derek and the Dominos album Layla and Other Assorted Love Songs, including the legendary lick on “Layla.”

Later, after the success of Fillmore East earned the Allman Brothers Band some fame (the album was certified gold), they enjoyed some down time in Macon, resting and doing some work on their next album, Eat A Peach.

On October 29, 1971, Duane was driving his Harley in Macon when, at the intersection of Hillcrest and Bartlett, he collided with a flatbed truck that had started a left turn in front of him. He was thrown from the bike, which then landed atop him, rendering him unconscious. Suffering a ruptured coronary artery and severly damaged liver, he died in surgery a few hours later. His gravesite in Macon’s Rose Hill Cemetary sits alongside that of bandmate Berry Oakley, who died in a motorcycle accident the following year.


For more on Duane Allman, read Skydog: The Duane Allman Story, by Randy Poe (2006).
This article originally appeared in VG‘s December 2008 issue. All copyrights are by the author and Vintage Guitar magazine. Unauthorized replication or use is strictly prohibited.
The Allman Brothers Band with Duane – Whipping Post – Fillmore East – 09/23/1970