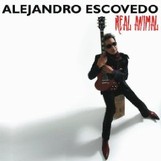 Long a favorite of critics, the former member of the Nuns takes us through a personal history put to musical styles that show his best traits, lyrically and vocally.

His music at times is Springsteen-esque, as on “Always a Friend,” while cuts like “Sister Lost Soul” are more like stripped-down Phil Spector. There are soulful ballads like “Sensitive Boys.” The great chord changes are the main feature of the simple country ballad “Hollywood Hills.” There’s some fine stomp on the record, too, like “Chip ‘N’ Tony.” Set to a Bo Diddley beat with a nasty solo, it defines rock and roll. Same goes for “Nun’s Song,” a tribute to his former band. “Golden Bear” sounds like a long-lost Bowie gem.

The inventiveness of this music is matched by the cleverness of the lyrics, as Escovedo dances through his own history (and the history of rock). Guitars are wonderful and very fitting throughout; Escovedo plays, along with David Pulkingham and Chuck Prophet, who co-wrote the music with Alejandro. There are no wasted notes, and the solo on “Sensitive Boys” is short, to-the-point, even as it’s a great display of chops.

This is a killer record, and if the music business was a better place, Escovedo would be major player in rock and roll.