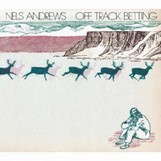 Nels Andrews’ second release straddles the gap between singer/songwriter folk and roots rock. Andrews paints tableaus with broad strokes so listeners can fill in the details. Some recall this poetry. Whatever, Andrews’ music hits its target.

All nine original songs on Off Track Betting have a near-hypnotic quality. But unlike many esoteric singer/songwriters whose work often floats upward into the ether, Andrews’ tunes remain grounded. His most romantic song, “Butterfly Wing,” keeps the similes simple, and even the artificial bird sounds in lieu of an instrumental solo doesn’t dilute the song’s gritty power. This is a songwriter’s album, without hot solos or intentional flashes of instrumental brilliance to distract listeners from the songs themselves. Even Andrews’ vocals are understated. The only sonic histrionics come in the form of little percussive and electronic flourishes that add a slightly esoteric overlay to the music.

Produced by Todd Sickafoose, all nine songs maintain a visceral musical texture. Acoustic guitars join pump organ, harp, mellotron, fuzz guitar, and even a wine glass orchestra to form a sonic landscape with the depth of the Great Marianas Trench. According to Andrews, “We strayed from the traditional folk sound, moving into newer soundscapes to incorporate harp, klezmer banjos, sampled electronics, and toy pianos.” Despite the layers of instruments the orchestrations still manage to sound lean and restrained.

Nels Andrews’ music hints at the future of the work of the singer/songwriter in America.


This article originally appeared in VG‘s Oct. ’08 issue. All copyrights are by the author and Vintage Guitar magazine. Unauthorized replication or use is strictly prohibited.