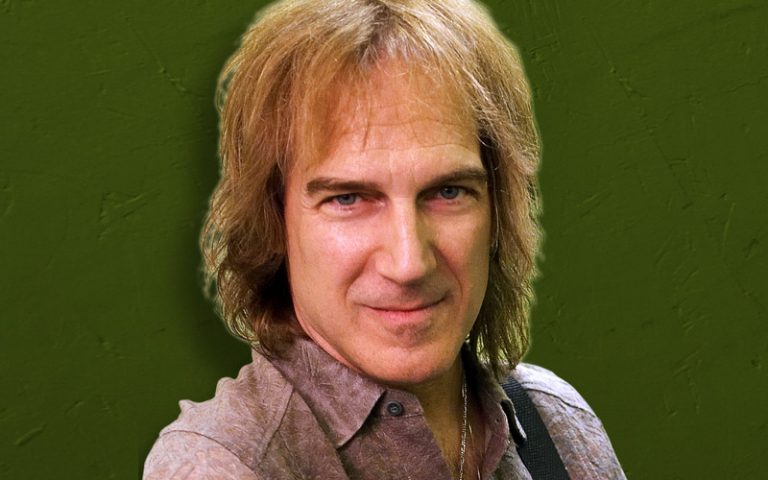 This year marks Boston-born Dave Amato’s 19th annum with REO Speedwagon. The guitarist moved to California in 1980 and became a working session player before gigging with Ted Nugent, Jimmy Barnes, and Cher, then landed the gig with REO, which has taken him around the world and seen him acquire many classic instruments.

“I didn’t know what I had back then,” Amato recalled ruefully. “So I sold them to get a new Stratocaster.”

He has since acquired a replacement TV model, as well as dozens of other instruments. REO Speedwagon toured extensively in the summer of 2007 to promote the band’s latest album, Find Your Own Way Home, and as the band was gearing up for some 2008 dates, the genial guitarist recently went one-on-one with Vintage Guitar about his perpetual enthusiasm for vintage instruments.

Amato is one of those players who generally uses his vintage instruments in the studio while taking durable modern instruments on the road. These days, Gibson Historic Les Pauls and Fender Custom Shop Stratocasters and Telecasters comprise the bulk of his touring arsenal.

“I’ve got a couple of Historics with [Bigsby vibratos], which I like, although they don’t stay in tune as well as some of the other vibratos,” he noted. “But those guitars seem a bit lighter with all that hardware. I had a ’58 reissue, but I didn’t like the tone and I changed the front pickup and added a Bigsby. That seemed to give it more top end, and I love its sound now.”

Amato’s vintage collection is keystoned by a 1954 Stratocaster (7829) he scored on a trip to Norman’s Rare Guitars in Tarzana, California, accompanied by Bon Jovi guitarist Richie Sambora.

“Richie was looking at a Martin 000 model, and I was eyeballing this all-original ’54 Strat, which Norm had priced for $12,000,” Amato chuckled. “Norm told me that if he sold Richie the Martin, he’d sell me the Strat for $9,000. So I pestered Richie all night. The next morning, he got the Martin!

“I had been looking for a first-year Strat – I try to get first-year guitars. I also have a ’52 all-gold Gibson Les Paul and two ’54 Les Paul Juniors.”

His favorites for recording are the ’54 and the black ’58 with a maple neck. “It sounds unbelievable, and plays fantastic. They all sound good, but that one sounds amazing on record, as does the ’54. They’re just a touch different.”

“I think they sound the same,” he said of the refins. “And most were refinished years ago at the factory; I bought them because I liked their sound. The finishes were done so well and so long ago it doesn’t really matter.”

The other ’58 Strat is in Desert Sand finish, which was usually found on Fender’s Musicmaster and Duo-Sonic student guitars of the era.

“I bought it many years ago, and I still haven’t checked whether it’s a refin or not, but it looks pretty good, and people who have seen it have gone ‘Wow!’ If somebody refinned that one, they must have done it in the Fender factory, because its color is spot-on. It actually sounds a little darker than the black ’58 or the ’54; maybe it’s the pickups. But it’s still a great guitar.”

On the other hand, the REO vet noted that the black finish on his ’70 Telecaster is a rare factory-original color.

“I love the tone of Teles with Bigsbys,” Amato said. “I don’t know why! They’re a lot of fun, and that one sounds beautiful, and is in incredible condition. The black color is really hard to find; most are natural finish.”

While Amato acknowledges that Fender custom-color instruments may be more desirable, he won’t go out of his way to get a new custom-color Fender.

“I’m more traditional,” he said. “If I had something done by the Custom Shop, I’d want a regular stock look, like my old ones,” he said. “And I love Relics, I just got a Telecaster with a Bigsby made by Master Builder Yuri Shishkov that emulates a late-’50s blond with a maple neck. It’s awesome.”

“I really like the look of the three-pickup Custom,” he said. “It’s not a first-year model, and it’s not even the first year for three pickups on that model, but it’s really clean. As for the TV-finish guitars, if you’re collecting, you need to have a pair of those – a one-pickup and a two-pickup. I got the Junior with the original Bigsby from Norm’s Rare Guitars; I’d never seen one, so I had to have it.”

The REO guitarslinger has also never owned a late-’50s Gibson Les Paul Standard – the fabled “Burst.” “That may have been one of my biggest blunders,” he said. “I didn’t want to spend the money at the time, but they kept going up and up and I missed the boat. I had plenty of opportunities to buy one!”

When it comes to Gibson solidbody models for recording, Amato says “I lean toward ’50s Les Pauls because I’m more of a Les Paul player. But I have a soft spot in my heart for SGs because I had a bunch of them when I was a kid. That’s the kicker about an SG Special – I had one then, so I need one now!”

Amato has two ’68 ES-335s (846236 and 595208), one of which has a Bigsby. “I own a lot of guitars with Bigsbys,” he said. “They catch my eye for some reason. I like to play them, but maybe anything with a lot of hardware is going to attract my attention. I just got the one with the Bigsby, but I haven’t used it yet. I did use the one without the Bigsby a lot on the new REO record.”

As is the case with Fenders, standard finishes in Gibson instruments have more appeal than rare or custom finishes.

“I go the traditional route with sunbursts,” he said of his 335s. “Norm’s had some red ones that were beautiful; I like that, but sunburst is my favorite finish on 335s.”

“I got a six-string Chet, and I like to get pairs if I can,” he said. “Like a 12-string and a six-string of the same model. I asked Gibson’s endorsement guy if they ever made a 12-string Chet, and he had one that they had made for a country artist. As I understand, she hated it. Timing-wise, I lucked out because when I asked him about it, he had it under his desk. I’ve used it live; it plays great and sounds wonderful.”

There’s also a ’65 Gibson Hummingbird (362586) in near-mint condition. Confirming his propensity for trading up, Amato parted with a ’67 Hummingbird in order to acquire the ’65.

Other acoustics include a 12-string Martin from the company’s custom shop; it’s heard on Find Your Own Way Home.

“I heard they made 22 of them,” he said of the 12-string version. “I talked to a Beatles memorabilia dealer at a Texas guitar show, and he said that of the 22, 15 went to Japan and seven stayed in the States – and he had five of them, and I talked him out of one. Since it’s a three-quarter size, it’s hard to play.”

The ’67 Gretsch Country Gentleman (79759) is another Beatles-inspired acquisition. Amato described the guitar as “…really, really close to George Harrison’s – dark walnut. I changed it because I wanted to convert it to Harrison specs. I think I put a different pickup in the neck position. It was really hard to find the double mutes when I starting changing it.” There’s also a ’65 Gibson J-160E (300093), as played by Lennon.

Because Amato’s career also includes times when he played guitars with pointy headstocks, he owns several including a matching ’83 Gibson korina Explorer and Flying V; he uses the V live, and only recently acquired the Explorer (80613521), which he plans on taking on tour, as well. He’s looking to complete the set with the reissue of Gibson’s late-’50s Moderne. “They’re cool. I love the way korina instruments sound.”

The limited edition ’97 Lonnie Mack Flying V (94007200) is another nod to his hardware/Bigsby propensities.

Amato still acquires “player” instruments on occasion, and he picked up a 2002 Fender Classic Strat with a humbucker in the the bridge position and Floyd Rose vibrato.

“I use them in the studio because I loved the classic Jimi Hendrix sound,” he detailed. “I’ve always loved plexi heads. They sound fantastic, and there’s something special about those PA heads – plug into the top input on the left, crank to 8 or 9, and it just sings! I think they’re fantastic for guitar. I also use some mid-’80s JCM-800 channel-switching heads live and in the studio, but one of those plexi PA heads is my favorite.”

Amato’s longtime association with REO Speedwagon has allowed him to acquire an admirable collection of guitars, and he’s always willing to share his enthusiasm about his passion of making good music on vintage equipment.