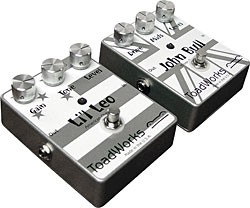 Washington-based ToadWorks USA was founded by Ryan Dunn and Doug Harrison in 2001. They recently asked if we’d be hip to checking out their Lil’ Leo and John Bull units. Well, we like to think we’re hip, so of course we said, “Booyah!” (‘cuz that’s what you say when you’re hip, right?).

With our trusty single-coil-equipped Hamer Daytona and “humbuckered” ’70s Ibanez Artist, we plugged the pedals into a 65Amps London all-tube amp with 2×12″ cab (see review in this section) and an all-tube Peavey Delta Blues 1×15″ combo.

First up was the Lil’ Leo, teamed with the Ibanez through the London. Matching the output level of the pedal with the amp, we added a touch of Drive and set the Tone knob to 10 o’clock. The Lil’ Leo delivered as promised, producing a slightly crispy overdrive reminiscent of a cranked blackface Fender. The pedal did not reduce low-end response, as distortion pedals are prone to do, and also did not compress our signal as much as we anticipated, instead leaving intact its natural, cutting tone. Pushing the Gain, we were rewarded with more natural distortion, always with nice note separation. Turning up the Tone control added a nice sparkle to solo licks. Turning the gain all the way up made the pedal sound very much like an old blackface cranked too high. And regardless of how it was set (within reason), the Lil’ Leo added a touch of midrange response, which enhanced its emulation of blackface tone.

With the Daytona plugged into the London, we dialed back the Gain to get a natural, slightly overdriven classic single-coil tone reminiscent of Stevie Ray Vaughan with his trusty “Number One” Fender Stratocaster. Pushing the Gain produced a more crisp distortion that retained good note separation right up until we maxxed it out. And the pedal stayed very transparent, with only a slight boost in the mids.

We then plugged the John Bull into the London, grabbed the Daytona, and set the pedal’s drive to 10 o’clock. Wait… what’s with all the heavy, fuzz-like gain? We toyed with the Mids control, but couldn’t get the pedal to sound “right.” So, after getting a bit frustrated, we consulted ToadWorks, who advised us that not all amps will interact with the John Bull in the same way. So, trying again, this time through the Peavey, we again tweaked the Mids control – Voila! Overdrive reminiscent of a cranked British amp. That’s what we were looking for.

The Ibanez’s humbuckers also produced a thick British/Cream “Crossroads” tone, with ample low-end response. Dialing in more drive lets the John Bull offer as much gain as you can use, and then some, on up to full-on fuzz when dimed.

Both the Lil’ Leo and John Bull are good bargains, especially considering the quality of their materials and workmanship. We came to favor the Lil’ Leo’s true-to-form overdriven Fender blackface tone at a comfortable volume, but were also quite fond of the John Bull’s authentic British overdrive, especially with the “right” amp. 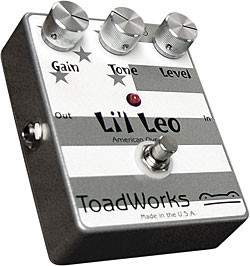 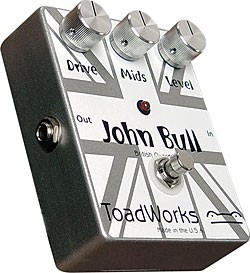