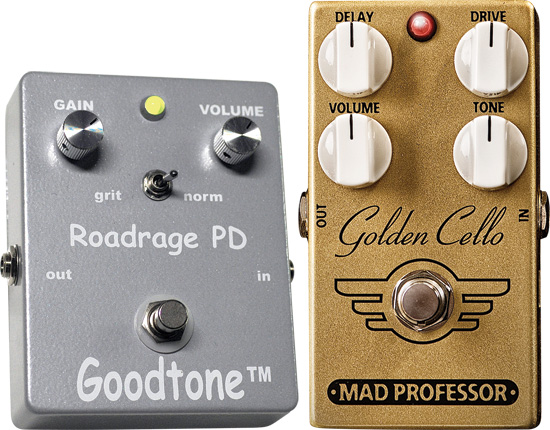 Goodtone Amps builder Norm Matthews has a rep for building noteable guitar amps, and more recently he delved into effects pedals. Matthews’ first box is the Roadrage PD, a true-bypass, two-stage MOSFET-based unit designed to deliver neutral clean gain boost or overdrive. In other words, it’s the latest twist on an age-old concept almost every electric-guitar player can appreciate – an “uncolored” clean boost.

Plugged into a series of amps, the Roadrage is impressively transparent – and usable – especially when coupled with vintage/non-master-volume amps that produce enough hair for rhythm guitar parts but typically require an overdrive for leads. Unlike overdrive pedals, the Roadrage does not change the sound of the guitar – it simply makes it louder by making the amp’s preamp stage produce a slightly more compressed, singing tone. Plugged in between a Stratocaster and a vintage Vibrolux Reverb, the box delivers in a number of tonal areas. Though not a compressor, per se, it works very well for slide playing, providing a bit of squash/sustain for a bottleneck-slide sound. Tested with a Les Paul and a vintage 50-watt Marshall, it gave the extra kick that made the amp sing. Placed in front of a vintage Ibanez TS-9, it restored some of the dynamics the TS-9 tends to suppress.

Like most pedals, the Roadrage uses a 9-volt battery and can also be powered by an external power plug (with tip-ground). But it stands out in part because it’s built using point-to-point writing, with high-end components like Sprague Orange Drop caps and carbon-film resistors. Its controls are simple: a Volume pot controls output and a Gain pot adjusts the level going from the first to the second FET stage, pushing the second into a bit of compression followed by a slight distortion. There’s also a Grit/Norm switch that changes the gain structure of the pedal, allowing more clipping in the Grit position. Despite being MOSFET, the Grit setting provides a very warm, tube-like distortion.

The Golden Cello by Mad Professor is a combination overdrive and delay pedal engineered to marry the two effects. Equipped with four external controls and three internal trim switches, the Golden Cello packs a lot of functionality in a super-small footprint. On top of the pedal are controls for Volume, Tone, Drive, and Delay (level). The internal trimmers control the amount of repeats and delay length (which, according to the manufacturer, must remain in balance with each other) and the final trimmer determines the amount of volume going into the delay stage.

We followed the advice of the owner’s manual and plugged into a clean-toned amplifier. While such a set up is generally limited, in practice it makes sense given the design of the Golden Cello. One way to think of the relationship between this pedal and a clean amp would be to consider the Golden Cello as a preamp and an amplifier as the power amp, with the delay being between the two as an effects loop. And while many might think it better to plug an overdrive into an already dirty amp, such a setup would render the repeats of the delay muddled and indistinct.

Plugging into a clean amp with a humbucker-equipped guitar, we found the overdrive to be surprisingly thick and powerful, capable of handling drive and distortion duties all by itself. The distortion shared the same strong, rich musical characteristics that power-tube distortion has. Combined with the tape echo-styled delay, the Golden Cello transforms licks into singing lead lines that sound slick and professional.

Depending on what one’s needs might be, the Golden Cello could serve as the only pedal needed in a given setup. Though adjusting the internal trim pots require opening the back, the pedal ships with optimum settings and, in reality they’re more about “set and forget” than regular tweaking. No one-trick pony, you’d be hard-pressed to find a better-sounding combination of overdrive and delay in a single box.