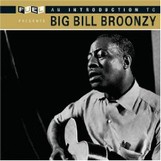 Broonzy was a towering figure in the blues world, literally and figuratively. Some reports put his height at 6’6″, and beyond his formidable talents as singer, songwriter, and guitarist, he was mentor to younger artists like Muddy Waters and, as the first American bluesman to tour the UK, was a major influence for at least two generations of English musicians of various genres – from British blues pioneers John Mayall and Alexis Korner to rock stars Eric Clapton and Ray Davies to jazz guitarist Martin Taylor, who cites his father’s Broonzy records as his initial inspiration for taking up the instrument.

A nod from Big Bill got Muddy’s foot in the door at Chess Records, and Waters later dedicated an album to him (Muddy Waters Sings “Big Bill”) and named his son (bluesman Big Bill Morganfield) after him. Following Bill’s death in August, 1958, Waters was one of his pallbearers, along with Tampa Red, Otis Spann, Sunnyland Slim, author and broadcaster Studs Terkel, and Brother John Sellers, who gave a eulogy at the funeral. (Conflicting dates are given for Broonzy’s birth, but he was probably in his early 60s when he died of throat cancer.)

Though they were both born in Mississippi, Waters’ playing (even after he plugged in and cast the dye for Chicago blues bands) was more indicative of the Delta style. Broonzy, who spent his formative years in Arkansas, learned from Papa Charlie Jackson, and fingerpicked in a style more in common with Eastern Seaboard players like Brownie McGhee, who recorded with the elder bluesman.

But perhaps Big Bill’s most important role, and one for which he was perfectly suited, was as blues’ first ambassador to the world. Thanks to the “trad jazz” craze, he made his first trip to England in 1951, and soon started touring there and on the Continent, in France, Belgium, and The Netherlands. As his February 26 and 28 appearances in Amsterdam, recorded by Louis Van Gasteren, illustrate, he charmed audiences with his between-song patter and served up a smorgasbord of American music, from blues (like Bessie Smith’s “Backwater Blues” to Leroy Carr’s “When The Sun Goes Down”) to folk songs like “Crawdad Hole” and “John Henry” to spirituals like “Down By The Riverside” to hillbilly music like “Goin’ Down The Road Feeling Bad,” usually credited to Woody Guthrie, to pop fare like “Glory Of Love,” transformed into driving ragtime in the style of his variations of “Guitar Rag” included here, spotlighting his hammer of a right hand.

The sound quality here is surprisingly good, accommodating the full dynamic range of Bill’s voice, from hushed to soaring, with his Martin ringing like a bell. My only quibble is that the songs are indexed with the spoken intro to one song tacked onto the previous song – meaning that if hit your CD changer’s shuffle button you hear a song and the intro to another song, then the machine skips to an entirely different selection. This also makes it difficult for disc-jockeys to play songs in their original settings, with spoken introductions that are informative and often humorous.

Overseas, Broonzy was pleasantly surprised to not encounter the type of racism that was status quo back home (depicted in his well-known “Black, Brown and White”). As recounted in anecdotes and rare photographs in the package’s 40-page booklet, he became comfortable enough to father a son by a Dutch woman in 1956. Although he and the boy’s mother both divorced their then-spouses, and he returned to visit his new family several times, he died before they could marry.

Almost 50 years after his death, these recordings bring Bill Broonzy back to life, and are perhaps the best example of what made him such a giant.