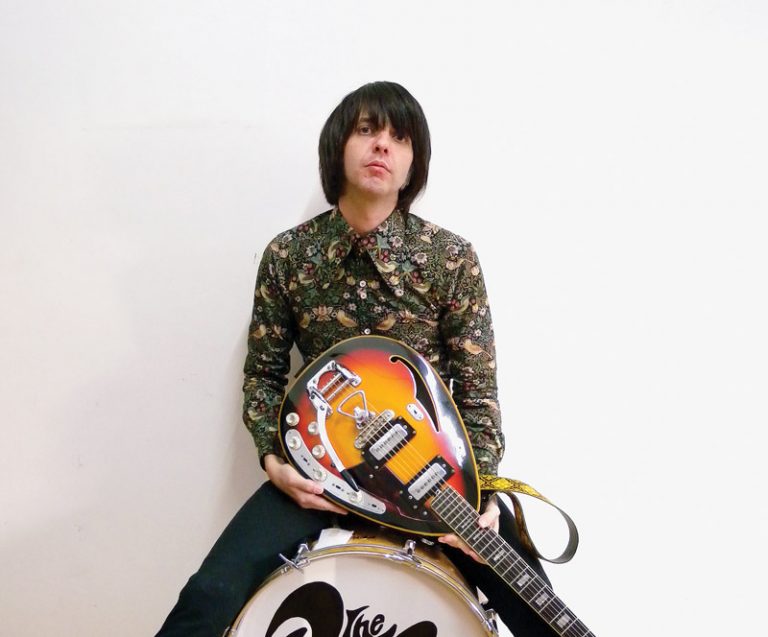 The Routes embody all the best elements of the ’60s psychedelic-rock scene. Based in Japan and fronted by British-born guitarist and songwriter Chris Jack, the band’s sixth release, Dirty Needles and Pins, has the band staying true to form by relying on period-correct gear.

“In England, you rarely see vintage guitars in good condition, not even in shops,” Jacks said. “When I started out, everyone wanted an Ibanez or Kramer; I got a Westone, which was actually a really good guitar. In the late ’80s and ’90s, buyers from Japanese shops went to England and the States and bought guitars. Now, Japan has more vintage guitars than they need and a lot of buyers from America are coming over and buying stuff back.”

Over the years, you’ve established quite a collection of vintage guitars, including some rare Guyatone and Burns models.

A lot of my stuff came from a famous collector in Japan who has a book about his collection. By chance, I stumbled on one of his guitars at auction. The first one I bought was my ’63 Burns Black Bison. I also have got a ’67 Guyatone LG-220T, which is the holy grail of Japanese guitars, a ’65 Burns Double Six, a ’65 Burns Vista Sonic and a ’64 Burns Vibra Artist. I’ve also got a ’67 Gretsch Astro Jet and a ’64 Fender Jaguar, which I love.

Do you modify your vintage guitars to make them play or sound better onstage or in the studio?

No, mine are all stock, I don’t want to change anything on them. I have a ’67 Vox Starstream that has all the built-in effects – wah, distortion, a repeater effect which is like a tremolo, a treble booster, and a bunch of stuff. I do have to clean it all the time or it gets that horrible static noise.

Do you tour with them?

For touring overseas, I usually take a Japanese Jaguar. Fender guitars are great for touring because they’re so solid. They’re really trebly, though, so I change the pots. They have 1,000k pots, and I swap them out to 500k which takes the edge off the treble. Then I throw American pickups in them. The Japanese Jaguar pickups aren’t wax potted, so they’re really microphonic. I put the neck pickup in the bridge position and the bridge pickup in the neck position and it makes it much better for what I do.

What is your go-to guitar for playing live?

I use a lot of vintage guitars, but with some of the Guyatones and Burns, the microphonic pickups just don’t cut it live. So I gave a famous luthier in Japan, A. Kuwano, my Starstream, Astro Jet, ’64 Jaguar, and Guyatone, and I said “Put these four guitars together.” And the one he built is my main live guitar. It has the scale length and neck shape like the Starstream, which I’m very comfortable with, and the inlays because I’m blind as a bat onstage. It’s got a solid mahogany body, mahogany neck, and an ebony fingerboard. It originally had Filter’Trons like the Gretsch, then I switched to humbuckers. I tried all kinds of pickups and we ended up with a set of current Guild pickups – the small D’Armond P-90-shaped ones – and they sounded the best out of everything.

Are you also a fan of vintage stompboxes?

I like vintage fuzz pedals, especially Japanese ones. One I use a lot is a ’70s Acetone Fuzzmaster II. I also use an early-’70s Univox Super Fuzz, a Vox V810 Valve Tone, a ’70s Eko Multitone, a pair of ’70s Roland Bee Baas, a 1967 Maestro Fuzz Tone and a ’70s Elk Super Fuzz Sustainar. I have clones made for travelling overseas. Mitstuteru Takaki at MT Labs is my effects man and he makes original pedals and clones using NOS parts. On the first album, I didn’t use any effects, I just plugged straight into a Roland JC-120.

Given your choices of guitars and pedals, is it safe to assume you also rely on vintage amps?

Yeah, I used my ’60s Selmer Treble ’N Bass Mk II on most of the new record. That’s the same model Syd Barrett used. You crank it all the way up and get that “Interstellar Overdrive” sound. I use a Roland JC-40, as well, and occasionally gig with my ’60s Vox Super Beatle, which I really like. It’s a workhorse and has such a huge sound. When you put the fuzz through it, you get every bit of fuzz; nothing’s affected. So I’ve got all the vintage gear for performing live, but for the convenience of recording, I sometimes use modern gear. – Johnny Zapp