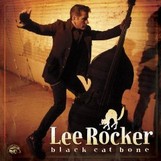 On his second record for Alligator, former Stray Cats bassist Lee Rocker continues to show just how vital he was to that band’s sound, and that he can write and interpret songs as well as anyone in the genre.

Cuts like “Gone,” the title track, and “Rebel” prove he’s still sharp with the pen, and he even gets a little political with the swampy “Sold Us Down the River.” Bob Dylan’s “One More Night” becomes a ’50s-style country/pop tune, and a stompin’ “Lost Highway” is one of the finest cuts on the record.

Rocker’s bass playing is, to nobody’s surprise, excellent throughout. He propels the manic boogie of “The Wall of Death” and takes a 90-second solo during the closer, “Free Bass.” Guitar-wise, the record is chock full of great playing. Buzz Campbell and Brophy Dale trade licks throughout and a quick listen to cuts like “Crazy When She Drinks” lets you know they’re more than up to the task. Punchy double stops mix with lightening-quick runs all through the song. Dale’s slide guitar is featured on several cuts including “Sold Down the River.” Tasty and melodic solos help to reinforce the ballad feel of songs like “What I Don’t Know.” And, the atmospheric guitars on the title cut turn it into a spooky jazz piece that matches its title.

While not a whole lot of new ground is broken here, if you want solid roots rock and roll, you can’t beat this.