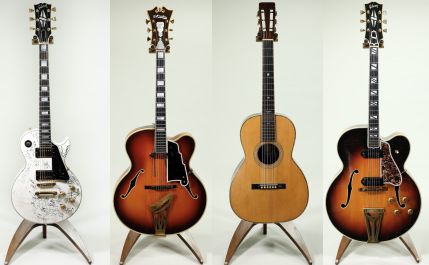 FARMINGDALE, New York – D’Addario & Company is thrilled to announce the launch of The Official Jim D’Addario Reverb Guitar Collection on Reverb, the leading website and app for buying and selling new, used, and vintage music gear. All proceeds from the shop will be donated to the D’Addario Foundation.

Through an incredibly personalized approach, the 501c3 non-profit D’Addario Foundation annually provides support to innovative music education programs bringing children access to robust instrument instruction throughout the country. In addition to giving hundreds of thousands of children the opportunity to learn to play an instrument, the D’Addario Foundation provides equipment support, performance and learning opportunities, college scholarships and fundraising assistance to these burgeoning programs. The D’Addario family and D’Addario & Company are steadfast in their commitment to supporting these endeavors to give back and ensure that as many people as possible have access to the profound impact of music.

“I have more than 50 awesome guitars in my collection and unfortunately I find I am not playing most of them. Out of feeling guilty that some of these great guitars are not being played regularly and a desire to continue to support music education in a major way, I have decided to start the first round of selling some of my collection.” Jim D’Addario

Fourteen guitars from Jim’s collection will be sold in the shop beginning February 5. Guitars include:

This timeless instrument was custom built by John D’Angelico for jazz guitarist Bob Miranda in 1956. Jim purchased this guitar from Bob’s family in 1997. This guitar was a D’Angelico custom order made to Bob’s personal specifications. He played this instrument with Jazz icons such as Tony Bennett, Nina Simone, and Vick Damone.

This Norlin-Era Gibson is in incredible shape and was purchased by Jim from Tony DiCaprio in 1982. Tony used this guitar while recording and touring with Diana Ross in the Late ’70s/ Early ’80s.

This Norlin-Era Gibson was acquired by D’Addario when the company had acquired Guitar.com in the ’90s. This Les Paul custom is a Twentieth Anniversary Edition that still retained its white finish. Artist signatures include: Steve Vai, Joe Satriani, the late Warren Zevon, the late Cliff Burton, and many more

Jim purchased this guitar from MI Sales Rep. Steven D’Agostino. Jim loaned this guitar to guitarists Benjamin Verdery and Steven Salerno to be used on recording sessions and performances.

This Gibson is completely original and was one of the first Gibson hollow-bodies to feature Alnico 5 Staple pickups in both the bridge and neck positions. Original frets still have plenty of life left and are playable without buzzing.

This Hagstrom bass was purchased by Jim from Sam Ash Music in Hempstead in the late ’60s. It was used by Jim during his high school years. It has withstood the test of time and is in stellar condition.

This one-of-a-kind Larrivée Acoustic guitar is absolutely stunning. Jim received this as a gift from his brother, John D’Addario, Jr., in the early 1990s. This guitar is one of a dozen similar guitars built by Jean-Claude Larrivée in the late 1970s.

This is an astounding example of a Pre-War Martin 00-42. This 100-year-old instrument is in fantastic condition. It was purchased from Matt Umanov Guitar’s in the late ’90s. Luthier Flip Scipio did a normal setup work on it.

The neck and body are detailed with delicate inlays that are all in excellent condition. The guitar has a slot head neck and can accommodate light gauge acoustic steel strings, silk and steel strings as well as nylon ball-end strings.

In 1976, Martin Guitars manufactured 1,976 D-76 guitars in celebration of the American Bicentennial. This guitar was signed by Christian Frederick Martin III, CEO of the company at the time the guitar was manufactured.

It is structurally similar to a D-35 but with added cosmetic flair like the star fingerboard and headstock eagle inlay. The instrument was worked on at the factory in the 1990s to improve playability and intonation. It is in perfect condition.

In 2002, Martin Guitars partnered with inventor Ned Steinberger to manufacture a limited run of 100 guitars that would become the Transaction Acoustic. This model allows the user to adjust neck relief on the fly. It also features a Fishman Prefix Stereo Blend pickup system, and Planet Waves Ned Steinberger designed Auto-Trim Locking tuning machines. The guitar is in perfect condition.

This guitar is signed by the members of the band, The Eagles. This Luke is completely stock.

This guitar was signed by many Ernie Ball artists, including Casey Ball himself, and features the logo of the CLB Classic on the front.

This guitar is signed by The Rolling Stones and currently set up with D’Addario XT 10-46 Electric Strings and comes with the original hardshell case.

This is in fantastic condition with low action and a rather big, projecting tone

The Rickenbacker is a 1988 reissue style inspired by the guitar used by Byrd’s member Roger McGuinn in the ’60s and ’70s. This signature model was limited to 1,000 [JD1] [DH2] pieces built between 1988 and 1989. It is similar to the Rickenbacker 360, with the exception of the added middle pickup.