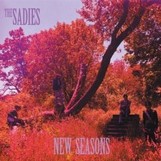 If you’re at all into guitar tones and cool songs, it’s hard not to love The Sadies, with brothers Dallas and Travis Good, whose feet are firmly in the country and country-rock of the Byrds and Flying Burrito Brothers.

On past recordings they’ve employed an almost cinematic/ Spaghetti Western sound. Here, though, it’s been ditched. Fans need not fear, however, as the tunes are some of the best of their careers. The mix is a sort of psychedelic country that hasn’t been heard in awhile. As always, guitars get the music across – anything from the wonderful acoustic flatpicking on “Introduction” to the incredible interaction between the two on “The First Inquisition (Part 4)” to the haunting, twangy lead and reverb-drenched solos on “The Trial.” And while the sound sometimes has a chaotic feel, it’s also obvious this is planned cacophony. Vocals have much the same feel; they’re so intertwined musically, it’s a wonder to behold. Gary Louris (Jayhawks, Golden Smog) co-produced and perhaps helped the brothers focus. That said, their not being focused has resulted in an amazing mix of music on past albums.

Few bands have produced music as consistently good as these guys have in their first five studio records. New Seasons should establish them as a guiding force in today’s alt-country field.


This article originally appeared in VG‘s Nov ’07 issue. All copyrights are by the author and Vintage Guitar magazine. Unauthorized replication or use is strictly prohibited.