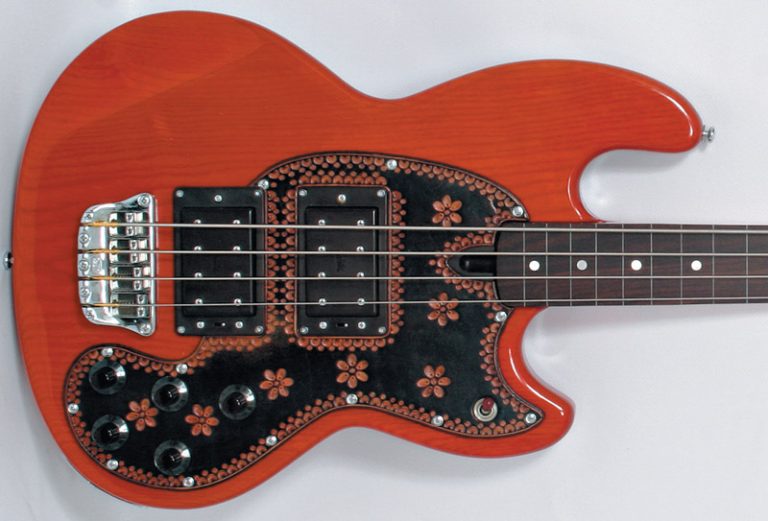 Wal began building electric basses in the early 1970s as a collaboration between Englishmen Pete Stevens and Ian Waller. Their efforts evolved into a company known as Electric Wood, and by the late ’70s their Pro (as in “production,” not “professional”) series models consisted of single- and double-pickup instruments in active or passive configurations. Total output was five or six basses per week, and the line was popular among noted musicians.

Around the time the Pro series was introduced, Electric Wood moved to High Wycombe, where it remains today. It also entered into a retail distribution relationship with Barratt’s Music Shop, in Manchester.

The first Wal made by Stevens (the luthier in the partnership) and Waller (the electronics expert) for Caravan and Quantum Jump bassist, John G. Perry, wasn’t particularly impressive. A short-scale instrument with an ash body, it had a Gibson bridge and knobs, and pickups from a Fender Mustang Bass and a Guild bass. Arguably, its strongest point was an eyecatching, hand-tooled leather pickguard that also turned up on other early Wals.

Many early Wal basses contain the initials “J.G.” in their serial numbers, a reference to veteran bassist John Gustafson, a respected Liverpool musician who played with the Big Three, the Merseybeats, and later, Roxy Music and the Ian Gillan Band. Several Wals were made for Gustafson, and he was an important early advocate for the brand.

Other early notable models included a tripleneck bass that ended up in the collection of Yes bassist Chris Squire. Other players to use early Wals were Mick Taylor, Paul Simenon, and Bow Wow Wow bassist Leigh Gorman, who whomped one in the band’s early-’80s “jailbait on the beach” video for “I Want Candy,” a rollicking cover of the Strangeloves hit.

Other high-profile appearances by Wal basses included the 1984 Bob Geldof/Band Aid charity single “Do They Know It’s Christmas,” which became the best-selling single in U.K. history (John Taylor of Duran Duran played a Wal Mk I in the video), and on the subsequent Live Aid benefit in 1985, one was played by Martin Kemp (Spandau Ballet) and John Ilsley (Dire Straits).

The Entwistle bass show here conforms to the early configuration and construction of most “J.G.” Wals, with a pudgy, nondescript body silhouette and a slightly oversized 2+2 headstock. It has a full 34″ scale, and a bolt-on multilaminate neck (with stripes visible on the back; the number of laminations on Wals varies depending on the model).

The fretboard is rosewood and was ordered by Entwistle as a lined fretless. Notes from the late Who bassist say it was one of his first fretless instruments, and further research by its current owner indicates it was the 18th Wal made. The truss rod is accessed at the neck joint, and the headstock has the company’s name in script, along with “J.G. Custom Bass.”

The body is one-piece ash, finished in a transluscent salmon color, with a forearm bevel on the front and belly cut on the back.

To control its tone, the bass has individual pickup volume controls, two tone controls, a master volume, and a three-way pickup toggle on the treble cutaway. The pickups are Wal units with eight adjustable polepieces, and the slider switches on each pickup mounting ring offer series/parallel configurations. The intonatable bridge/slotted tailpiece combination was also made by Wal.

Wal has developed other models over the years, including the Custom series, which replaced the Pro series in early 1981 and today remains in the lineup. Custom series basses offered a different active circuit, and pickguards were not offered, making for an immediate way to tell the difference between an original Pro and a Custom. However, a second Pro series (sans pickguard) was introduced in the ’90s, as was a sleeker-looking body silhouette called the Mark III.

Ian Waller died in 1988, but Stevens continues to build Wal basses by hand in England. Currently, there’s a two-year waiting list, and while some custom Wals have been (and continue to be) made with unique design characteristics or configurations, most share a common aesthetic. “Average” looks aside, though, this meticulously crafted brand has had a disproportionate share of high-profile players, which could mean that in terms of sound, playability, and aesthetics, Wal may be on to something.