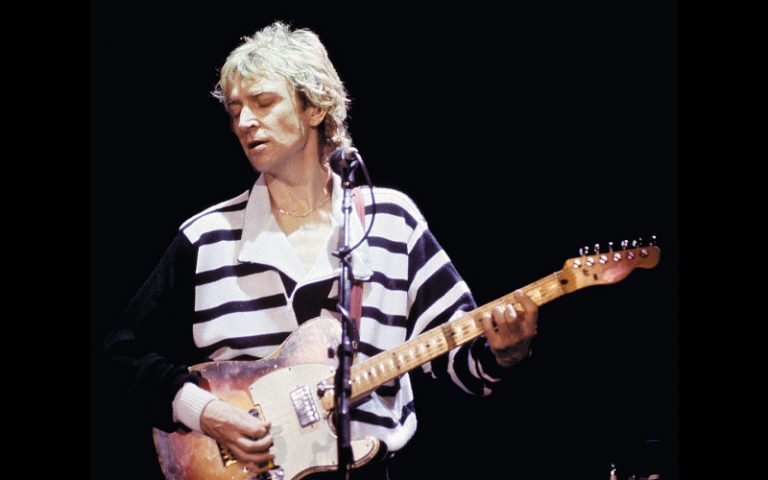 Best known for his innovative guitar playing in the Police, veteran English guitarist Andy Summers was into other genres of music long before he flexed his versatility in the ’80s heyday of the innovative platinum-selling band. • Summers grew up in Dorset county, on the Southern coast of England, and his interest in playing guitar was spurred by something beyond virtuoso musicianship.

“In the beginning, I was just attracted to the sound of it, the look of it,” said Summers. “My brother was into jazz, and the music I wanted to play was jazz guitar, because the coolest people were the American jazzers; the sort-of rebels were the jazz musicians. That’s where the real scene was happening, from what I could tell at that age. It wasn’t necessarily the rockers, because rock hadn’t really happened. But my ear was also  attracted to the complexity of jazz guitar. It seemed  more magical to me than surf melodies. I liked a lot of things, but I definitely started trying to play jazz.”

Given his affection for jazz, Summers is understandably proud of the anthology of his solo material, The X Tracks (Fuel 2000), which contains unique and listenable (primarily jazz) guitar-based music.

Like many other English guitarists, Summers started playing on a typicalHöfner model, and gradually improved not only on his playing, but his quality of instrument. One of his earliest recordings was a live album with the English soul band Zoot Money’s Big Roll Band, recorded at Klook’s Kleek in London.

Other short-lived efforts in the late ’60s included affiliations with the Soft Machine and the Animals, after which he temporarily emigrated to America and studied music, including classical guitar, at U.C.L.A. After four years, he returned to England and backed various musicians until the advent of the Police in 1977.

The worldwide success of that trio (with Stewart Copeland on drums and Sting on bass) has been well-documented, and at the time, Summers was typically seen playing a Fender Custom Telecaster with a humbucking pickup in the neck position. But he was also an early endorser of Hamer guitars. As seen in a live video by the Police, he played the opening number, “Synchronicity,” on a Hamer 12-string. Although he appreciated the original Hamer staff and the instruments they built, he said, “I was playing that weird hybrid Telecaster that I loved. No other guitar sounded as good; it provided all the magic for that band.”

The Police also made their share of music videos and got heavy airplay on MTV in the early ’80s. The post-apocalyptic setting of the video for “Synchronicity II” saw Summers atop a pile of wrecked automobiles, brandishing a Gittler guitar made by the late artist/inventor/musician Allen Gittler in New York City (VG, March ’00). Most who saw the video probably thought the skeletal instrument was a prop. “It was an interesting object,” said Summers. “I saw it in the Museum of Modern Art in New York. I met (Gittler); I went to his apartment in the East Village. I bought one, and eventually sold it. I remember being impressed that it actually did work!”

Summers’ solo career has consisted of more than one phase, including adventures into ambient/new age, as well as side projects including collaborations with guitarists Robert Fripp and John Etheridge. He has also done movie soundtrack work, including an uptempo version of “Also Sprach Zarathustra” for the 1984 film, 2010. In recent times, though, his focus has come full circle to the jazz stylings that attracted him to guitar in the first place.

Summers agrees that The X Tracks could be considered more a personal anthology than a “best of” collection. Its 12 songs were recorded between 1997 and 2002 and the package contains extensive liner notes about select tunes that include guest artists, but the guitarist was up for detailing other songs as well as those mentioned in his own writing.

“The tracks had already been recorded, so it was really a question of sequencing,” he explained. “We’d had a bit of success in England with my last release, Earth + Sky, and when we did this one, (the record company) wanted to call it The Best of…, but that’s so generic. The way I sequenced the tracks, I think it’s a nicely-rounded album; people have heard this stuff, but it’s interesting to hear the tracks in this context instead of as it was on the original albums.”

The lead-off track, “Big Thing,” starts things off in a big way. The song features powerhouse drumming from Bernie Dresel, and Summers evokes a unique guitar tone from his Gibson ES-335 through several devices. But this isn’t the original version of the song, which appeared on the 1990 album Charming Snakes. Rather, this is an updated studio version recorded in one take.

Summers’ citation of the ES-335 gave us the opportunity to inquire about his 2001 limited-edition (only 50 were made) signature model Gibson, a stop-tail ES-335 in an aged cherry finish, aged nickel hardware, and ’57 Classic pickups, based on an example he has owned for a long time.

“A 335 was one of the first good guitars I got as a kid after I moved on from all the crap,” he said with a laugh. “And I was very influenced by Grant Green at the time. I had a 1960 335, which was in great shape, and I’ve played it for years; it became the guitar I used for every gig. It’s an archetypical guitar, but I think the slimline with the block under the bridge is a very brilliant model; it really covers everything and is a great workhorse.

“When designing a signature model, you shouldn’t re-invent the guitar. I wanted the same things as on my old 335, but cleaned up a bit. I took it to Gibson, and they measured everything.”

And, he added, Martin is preparing an Andy Summers signature model.

Three songs on The X Tracks were composed by Charles Mingus, and originally appeared on Summers’ 2000 Mingus tribute album, Peggy’s Blue Skylight (Fuel 2000). The most unique of the three by the jazz giant is probably “Goodbye Pork Pie Hat,” which includes a recitation of a Mingus poem, “Where Can A Man Find Peace,” by rapper Q Tip layered over the classic Mingus musical composition.

“When I was doing that album – and I’d already done an album of (Thelonius) Monk tunes – I was trying to do a broad interpretation of Mingus material, updating some of the rhythms, but keeping it as a homage to the spirit of Mingus, in the sense that Mingus was a very experimental and adventurous musician,” Summers said. “One of the thoughts I had was to get a rapper into it, to do some of the pages from Mingus’ autobiography, Beneath the Under Dog. I really liked Q-Tip. When I was in New York recording with Deborah Harry, I mentioned this to an engineer, and he said, ‘We can get him. He’s in here all the time!’ We got on his cell phone, left a message, and he called back 20 minutes later saying he’d be honored to do the track.

“The weird thing was, the moment I called him, he was standing in Tower Records, buying the video of Mingus’ life story! How weird is that? Within a half hour, he was in the studio. It just sort of fell together.”

The Mingus composition, “Boogie Stop Shuffle,” is another example of the jazz great’s inspiration on Summers. The track has a full-on jazz arrangement, but is different from Mingus’ version, as Summers incorporated a different beat, as well as a wah pedal.

“It felt very good,” he reflected. “I was interested in driving the song forward – not making it sound like Mingus’ fast boogie. I wanted to do it my own way, which was sort of reggae with a wah-wah, and we created something that worked; it really builds. But what’s interesting to me is you’re taking a chance with music like that; there are a lot of purists out there. I was very aware of that, trying to make these tracks sound good, but keeping the right spirit.”

Other guest artists on the anthology appear on songs written by Thelonius Monk, from Summers’ other tribute album to another jazz great (1999’s Green Chimneys: The Music of Thelonius Monk). The aforementioned Deborah Harry, who is a jazz chanteuse and has performed with a band called the Jazz Passengers, sings on “Weird Nightmare,” and in their first recorded collaboration since the dissolution of the Police, former bandmate Sting sings the Monk icon “Round Midnight,” where the tuning is dropped a half-step from Summers’ original arrangement.

“I’d worked out how to play it in E-minor, which sounded very nice with the open voicing of the chord,” Summers recounted. “Sting wanted to do it in the original key of E-flat minor, so all I did was set up the guitar with strings that were slightly heavier, and dropped the (tuning) a half-step.”

Other songs on The X Tracks are all over the musical map. For example, “Circus” isn’t exactly mellow James Brown-type music, rather it’s a not-too-loud funk instrumental with a sharp hook. “Ruby My Dear,” one of two Wayne Shorter compositions on the album, is a reflective piece with Summers on acoustic archtop. Asked if any other acoustic archtops were to be found on the album, Summers, who owns a handcrafted Benedetto Cremona, said, “Probably not. I tend to use the 335; the only other one I’ve pulled out a couple of times in the last few years is a Gibson ES-175 Steve Howe model. It sounds fantastic.”

We also inquired about the recording setups he’s been using most recently.

“Lead guitar – the solos – are almost always recorded with a Groove Tube amp with nothing on it; just straight, through one speaker. We don’t want to add anything to it, and it’s usually done in the post section of the recording. I record solos with a different setup than what I use live, where I’ll add chorus and stereo.”

As for the future, Summers noted, “Every year seems to be different. I don’t want to go on doing gigs for the same project. I’ll never stop playing, and I’m thinking about doing something along the lines of a solo guitar concept – nylon-string – this summer. I’ve played classical guitar for years.

“I played Carnegie Hall a few months ago,” he added, “debuting a work that features variations of Balinese music – myself and Ben Verdery – who’s a great classical guitarist – and a symphony orchestra. We’ve been asked to do that again in November, and we may go to Korea at the end of the year. I’m also finishing up a guitar album with Ben and me. I may also take a one-man multimedia show on the road, utilizing photography, talking, writing, and guitar playing.”

Never content to rest on his considerable laurels, Summers continues to explore various facets of guitar music. Other players who’ve garnered critical acclaim and platinum album sales can only envision such a sojourn. After decades of impressive effort, Summers is still amazing listeners with his virtuosity, as well as his variety of musical stylings.