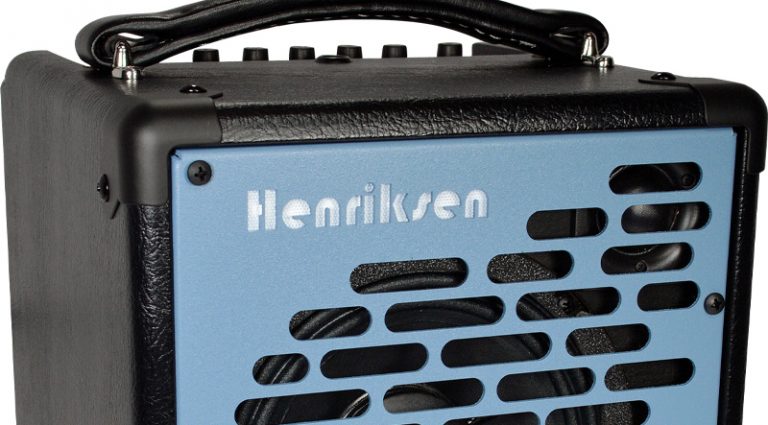 One old cliché among gigging musicians is, “They pay me for the aggravation, the music is free.” A good deal of that aggravation comes from lugging gear. If you play acoustic guitar, Henriksen’s new The Blu can reduce that stress plenty.

Measuring just 9″ x 9″x 9″ and weighing a mere 12 pounds, it’s nonetheless loaded with 120 watts of RMS power. Packed into that tiny space are five bands of EQ, reverb, an effects loop, 48 volts of phantom power on the balanced input, balanced and single-ended inputs, a balanced line output, extension speaker output, headphone output, and a two-way speaker system with a 6.5″ Eminence mid/woof and a fluid-cooled, high-output neodymium tweeter. The tweeter even has an on/off switch.

Any guitarist who relies on string attack for dynamic contrasts will love The Blu’s sensitivity. It responds to every nuance and retains so much of the guitar’s actual “acoustic” sound and sustain. Unlike amps that color the sound and make everything sound similar, The Blu delivers what-you-hear-is-what-you-get transparency. From a Les Paul Special to a John Pearse triple-pickup system in a “lawsuit” Takamine (and several instruments in between), The Blu retained each guitar’s unique tone and natural acoustic sustain.

Does The Blu have any shortcomings? Well, its 6.5″ speaker can be “bass-challenged” and occasionally bottom out on power chords. But if you send its line-level output to a PA or add a larger speaker cabinet, you’ll find plenty of low-end. The other potential problem is that The Blu is designed for one input – if you need two channels with separate gain controls, you’ll need two Blus.

Those are minor functional quibbles, well separated by The Blu’s fantastic audio performance and portability. For those tired of generic sound and soul-killing weight, The Blu just might brighten – and lighten – the day.