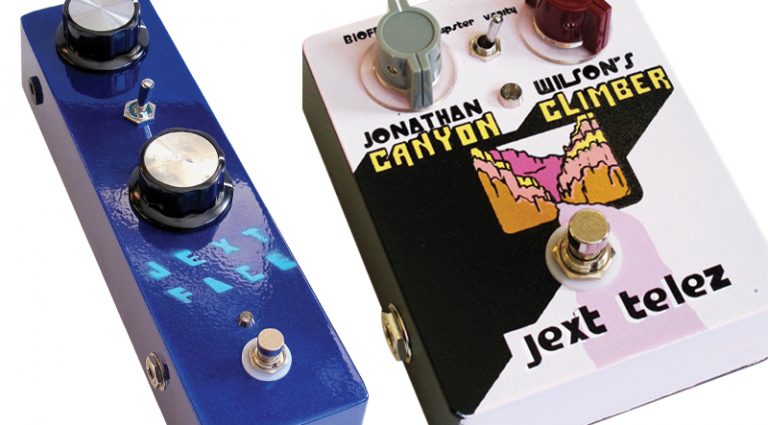 The latest creations from designers Bob Ebeling and Colin Simon harken to the glory days of ’60s fuzz tone, rejoicing in the extreme end of the distortion spectrum. After all, those were the heady days of the Space Race, and that quest to go places where no one had gone before extended to the fuzz box.

In the company’s fuzz stable, the Canyon Climber is the far out-est. A seemingly innocent little box, it’s modeled after the original Companion FY-2 made by Japan’s Shin-ei, a company renowned for its wild effects, which included wacky wahs that emulated sirens and hurricanes, as well as the legendary Uni-Vibe sold to Univox (the FY-2 was also badge-engineered and sold under numerous other monikers including Jax, Tele-Star, and Zenta). Jext Telez’s take comes courtesy of guitarist/producer Jonathan Wilson (Conor Oberst, Father John Misty), whose love affair with the Shin-ei is no secret.

One of the lovable characteristics of the FY-2 was its relentless fuzz capability, and the Canyon Climber retains that in spades. Basically, there’s no fuzzless setting here (beyond hitting the bypass footswitch, that is). The Biofeedback dial controls fuzz intensity, but in truth acts more like an EQ, adjusting – and only subtly – the tonal range of said fuzz.

Kick the pedal on and you’re rewarded with sonic mayhem. But it’s a sonorous mayhem, lovely in its degree of blur. Single notes are all prickly; double-stops are pure barbed wire. It’s a killer wall of fuzz.

Original FY-2s are also famous – or more accurately, infamous – for providing lower output volume than the input signal. This new iteration is true to the original, yet also includes a volume control (Nature) as well as a toggle (Vanity) that provides muscular boost – as much as 10 dB of oomph. This is a welcome feature, though it would be nice if it was footswitchable for solos.

The Jext Face is Jext Telez’s take on the Fuzz Face. There’s no shortage of such clones on the market, but this one is all about build quality, packaging, and tone.

It’s offered in two versions; a blue-box normal-gain overdrive and a red high-gain full-on fuzz machine. All of which proves Ebeling’s and Simon’s dedication to getting the sounds “right.” In fact, they say they spent so much time getting these pedals dialed in that girlfriends fled and wives put divorce on the table.

The blue Jext Face offers a sweet, clear signal boost with both a Volume control and toggle-switched turbocharger. And it’s not just a transparent boost, but a rich electric warmth. Think Jimi. Spin the control knob to enhance the lush qualities of that tone as it heads into fuzzy territory. Dimed, you get a sweet, enduring fuzz – never brittle, but all bite. And the pedal pushes natural sustain, as well.

Both Jext Face options have “no-squint” packaging, meaning the box and controls are supersized. The housing is the width and height of a typical stompbox but stretches a lengthy 10″. The control knobs are hefty, too, as if salvaged from a ’50s TV set. It’s unique and you’re never going to misplace it on a dimly lit stage.

Jext Telez effects are hand-made with pride in Detroit – solid inside and out. One more reason for fuzz connoisseurs to check out these wild ’60s-inspired boxes.