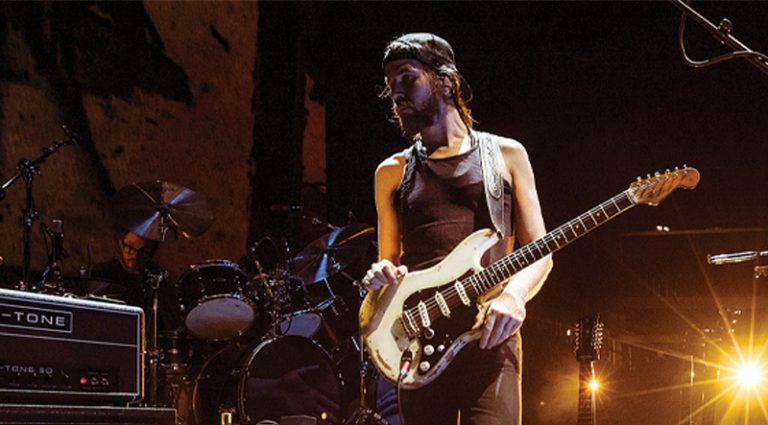 Given his busy career as a player and in-demand producer, it’s not surprising that singer/songwriter Jonathan Wilson needed more than three years to complete his new album, Rare Birds. When you’re in the studio with the likes of Father John Misty and Roger Waters, well, your own stuff is bound to take a backseat. For Wilson, it was all good.

The album feels like a new chapter. There’s a noticeable shift from the sound of your first two.

I agree. It’s a collection of songs, sound, and lyrics that I 100-percent like. There’s literally not one moment I do not know intimately or that’s devoid of purpose. Every note is there for a reason. I’ve never been this informed about an album I’ve made.

A lot of songs started from piano. I got an old Steinway grand where I sat writing and recording demos. But every song came naturally. We started with 22 or 23 and finished almost all of them. There were many musical ideas to try. I meditated on the results to find the album in that music.

How did producing other artists while working on Rare Birds affect the process?

First, I wasn’t ready to start recording until I had the songs I wanted. And then Roger coming into my life was something that, while unexpected, was an amazing process. Same with (Father John Misty’s) Pure Comedy. Everything happened for a reason, and both influenced Rare Birds for the better.

Where was your head during the creative process?

The album was so fun to make – very different from things I’ve done in the past. Every night was a party, lots of people coming in and out of the studio, hanging out, dancing in the control room, field testing whether the tunes stand the test of objective humans coming in and listening. How could I make it fresh, fun, free, and me? It took a while but I got there.

What guitars and amps did you use?

My dad’s ’72 Gibson ES-355 is on a lot of the album. Also, my Rickenbacker 12, my white GVCG strat, and my ’57 Les Paul Junior. The blackface Princeton Reverb, for sure, and a ’63 Vox AC30. I also used a new Hi-Tone amp and a hand-wired Fender tweed Deluxe. Sometimes, the Princeton and the Hi-Tone together for a sweet stereo spread.

You’re a known pedalhead. Did you use anything new on the album?

There are lots of Jext Telez pedals on here – a Dizzy Tone and Uni-drive, especially. The fuzz on “Trafalgar Square” is an old Mosrite Fuzzrite and the ’57 Les Paul Junior with the Tone all the way down. The song “Rare Birds” is interesting in that we kept my garage-band solo, improvised first take in Joshua Tree, then dropped that into the new full-band recording and re-amped the gnarly fuzz that started as my GVCG Tele into a Shin-Ei Companion Fuzz. I also collect Tone Benders, and there are quite a few of those on it, quite a bit of Catalinbread Ecorec, and my Mu-tron.

You have a Jext Telez signature Canyon Climber Fuzz. How did that come about?

That developed from a lot of dialogue with Bob Ebeling at Jext Telez, searching for the perfect fuzz to represent the solos I’ve recorded for albums. I often plug a fuzz directly into a Neve or Telefunken mic preamp, then blow it up and EQ it further. With the Canyon Climber, that’s exactly what we’ve created. It’s incredible.

You worked with Roger Waters on his new album and now you’re in his touring band. How did you two connect?

My friend Nigel (Godrich, producer of Waters’ recent Is This the Life We Really Wanted?) called because they needed a guitar player. It was great fun, and I love the record. We began recording in a large studio but eventually took the project to my home studio, where the vibes were more creative. I think Roger liked that setting. He’s absolutely amazing to work with in that capacity, and as our friendship grew and working relationship broadened, I began to see what a genius he was onstage every night. He lives in that live interpretation of the music, the spectacle, the theater. He truly pioneered the large-scale live rock-and-roll show. It’s a pleasure to play and sing beside him every show.

How long will you be on his tour?

We’ll be touring all of 2018, with my own tours in-between. We’ll do Australia, New Zealand, and Europe for both my tours and his, then South America later in the year. I’m booked until late December. It’s a lot to bite off, but now’s the time.