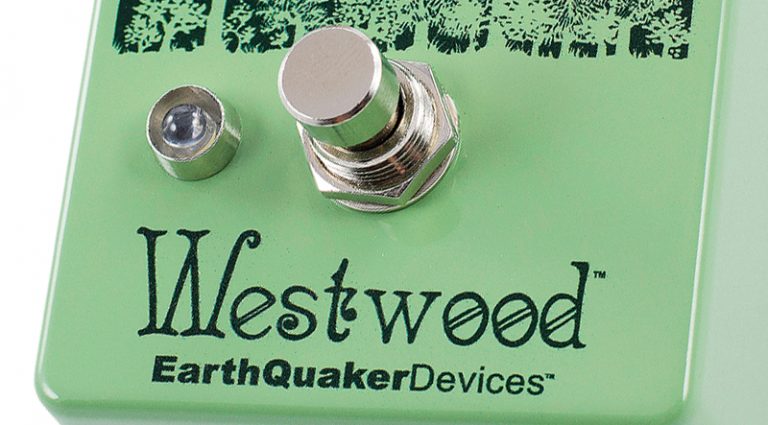 EarthQuaker Devices has a knack for launching pedals that range from ideal tools for those seeking otherworldly sonic textures to vintage-inspired stompboxes for old-school players. Falling more in the latter group, the Westwood Translucent Drive Manipulator is a versatile dirt/boost box with powerful EQ and a wide range of drive levels.

Superficially, the Westwood’s Drive, Level, Treble, and Bass knobs might seem pedestrian, but the Treble and Bass controls offer a twist in the form of a center detent and 20dB cut/boost. In basic terms, that means its EQ section can fatten single-coil sounds or put the raunchiest humbuckers on a diet. The switch controls are smartly designed relay-based true-bypass circuit that is far superior, with greater reliability and a lack of noise.

We tested the Translucent Drive Manipulator using a Les Paul loaded with Duncan Antiquities and a Deluxe Reverb. With the pedal’s knobs at 12 o’clock, we were off to a rocking start with crisp, cranked British tones displaying a pleasing fizz on the top-end. Backing off the gain to 9 o’clock and both tone knobs slightly, the pedal produced a tone that allowed clean R&B double-stops with a lighter touch as well as stinging single-note lines with a heavier pick attack.

The Westwood is extremely responsive to changes in touch. A twist to the right on the Drive knob resulted in some fuzz characteristics, yet things never got indistinct – it remained consistent, controlled, and usable at any setting.

The Westwood is a well laid-out, versatile box. Its powerful EQ and range of levels enable the player to craft an array of pleasing tones.