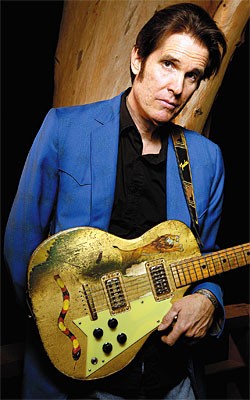 You’d expect a guy who spent time in bands like Lone Justice and X to be boisterous and outgoing, but Tony Gilkyson’s personality is better reflected on his latest solo effort, Goodbye Guitar.

Gilkyson’s background lends a hint of this dichotomy; his father was Terry Gilkyson, the 1950s/’60s folk singer who wrote songs for Walt Disney Studios, receiving an Academy Award nomination for “The Bear Necessities” from The Jungle Book. And then there’s his folk-singing sister, Eliza.

Tony’s guitar journey actually started on drums through his teenage years before he discovered guitar.

“I figured out I’d have an easier time meeting girls if I crossed over,” he says, laughing. “In some respects, I miss drumming. I’ve thought about getting back into it, but it’s a little late.” Gilkyson’s unique guitar sound and style may also come from another move – to New Mexico – when he was a teen. It was there he met many of guitarists from Oklahoma and Texas who weren’t into the popular guitarists of the ’60s, and they hipped him to other players. “They were borderline music Nazis, but it helped me because I became interested in country music as well as rock.”

In 1981, a friend moved to Los Angeles and invited Gilkyson to join him. It wasn’t easy. “I starved for three years. I said yes to every gig that came my way, lived in storage spaces and other unfathomable places where you can lay your head.” His break came in ’85, when he asked Maria McKee of Lone Justice to sing background on a recording. “There was a grapevine of country stylists on guitar, and I guess I was considered one. So they invited me to play some shows.” It was quite a change, he says. “I went from playing in tiny bars to a few people to opening for U2 for three months.”

At the time, Lone Justice was getting huge buzz in the music press. “It didn’t seem natural,” Gilkyson recalls. “And the band wasn’t allowed to evolve naturally.” Plus, he clashed with the band’s producer, who he says “…didn’t like country music.”

Gilkyson soon found a spot with the seminal West Coast punk band X. “In the beginning, it was a lot of fun. I enjoyed their sense of humor,” he said. “They were political and articulate. You don’t see that often in popular rock bands.” 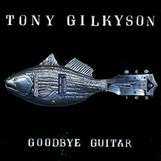 When he joined in ’86, punk music was more experimental. “There were changes in the ‘rules’ of punk. Bands were starting to improvise, and guitar solos were starting to come back. Toward the end, it came full circle, and that’s when I didn’t think it was right for me to continue, so I left in ’96.”

Despite Goodbye Guitar being Gilkyson’s first solo record in eight years, he has been busy. He plays guitar in bands with Mike Stinson and Randy Weeks, who supplies fine slide on the album. He has also produced and played with Chuck E. Weiss, did some soundtrack work, including working with T-Bone Burnett on the Walk the Line score. His production credits include two solo records by X lead singer Exene.

When the discussion turns to gear and equipment, Gilkyson is a big fan of his Kay Sizzler model guitar. “I dropped a couple of reissue Filter’trons in it, and it’s a really magnificent guitar. I love it!”

He uses that guitar for much of his work, but used a Telecaster on three or four songs on the new album. “I’ve always been a Fender guy – gone through lots of Teles,” he said. “I also have a ’61 Strat I bought in New Mexico in 1978 without a mark on it.” With a laugh he adds, “Now, it’s beat to a pulp.” His amplifier preferences also lean heavily toward Fender. Whether recording or playing live, he uses Super Reverb and Deluxe Reverb amps.

While Gilkyson has been playing guitar for almost four decades, he keeps going back to old favorites.

As for songwriters, he leans on old favorites like Merle Haggard, Bob Dylan, and Neil Young. That, and a listen to his record, might make for some surprises when Gilkyson talks about his latest writing. “I’ve been writing a lot of instrumentals,” he says. “I might actually do a whole album full.”

Then, after a bit of thought, his quiet humbleness kicks in. “Well maybe three or four songs anyway.”


This article originally appeared in VG‘s July 2006 issue. All copyrights are by the author and Vintage Guitar magazine. Unauthorized replication or use is strictly prohibited.