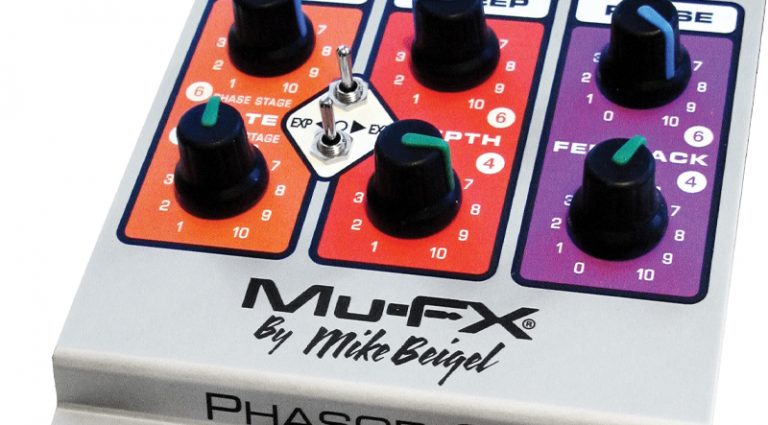 Mastermind effects mad scientist Mike Beigel is back with another re-creation of a classic Musitronics effect.

The Mu-FX Phasor 2X is a time machine back to the bad old ’70s that includes several smart upgrades which make the future look a little bit brighter.

In case you weren’t paying attention back in ’72, Beigel was one of the brains behind Musitronics Corporation, where he unveiled the beloved Mu-tron III that proved we all needed an envelope filter when we didn’t even know what one was. By ’78, Musitronics was history, but in 2012 Beigel sparked Mu-FX to build new and improved versions of his classics with the same DNA and musical mojo.

Beigel was also the inventor of one of the first (and best) phasers. Mutron’s original Phasor arrived in ’74, followed by the humongous Bi-Phase and Phasor II. Today, they’re all cherished boxes – and all elegantly expensive.

Beigel refers to his new Phasor 2X as a “modern vintage analog refinement” of the original. That’s a reasonable explanation, but there’s more to it than that.

The “2” in this box’s name tells us that this new version houses two Phasor IIs in one unit. It also adds savvy modern features such as four- and six-stage phasing, multiple independent controller modes, stereo output, and the possibility of real-time control by way of the optional Mission MU-XP2 expression pedal (other expression pedals work with the Phasor 2X but may not be as perfectly calibrated).

The circuitry is all-analog optical and made in the U.S. on dual circuit boards. It’s rock-solid and beautifully crafted, inside and out.

Plug in, and your instant reaction to that whoosh will be wow! The phaser sound is warm and full, sexy and rich.

The dual phasers can’t be combined in series, but you’ll forget about wanting this feature when you understand what the pedal can do.

You can dial in the separate four- and six-stage decks to create completely different wave patterns – then quickly switch between them with the tap of your toe. And for each deck there is a three-position toggle letting you switch between rate of phasing, sweep, and expression-pedal control. This versatility allows you to move from Waylon Jennings’ tough outlaw rhythm sound to Jimi’s sensuous “Little Wing” flights of fancy to Pink Floyd’s industrial-grade modulations and anything in-between.

The Phasor 2X keeps alive Beigel’s Space Age love of dials and toggles, so much so that you sometimes feel like you’re piloting a rocket ship. Here, the wealth of independent controls allows you to shape those sounds to the edges of the phaser universe. And don’t forget the expression-pedal possibilities.

With just a little bit of Sweep dialed in, you can get sweet, Uni-Vibe-like modulations – a sound simulating a spinning Leslie speaker. Or, opt for resonant waves that provide almost a flanging effect. Yes, it may be a cliché, but with the Phasor 2X, the limits are truly a function of your imagination.

As with many of Beigel’s boxes, he chooses to run the Phasor 2X on higher voltages for a purer sound. It requires 200 milliamps of 12-volt power, and there’s no battery option. A 12-volt wall-wart adaptor is included.

If you haven’t tried a Mutron or Mu-FX pedal, know that Beigel is one of the ultimate mad scientists when it comes to gear. There’s no true comparison in control, ability, and, ultimately, sonic tone. This is love at first swoosh.