Reverb! King of guitar effects.
If there’s an extracurricular sound guitarists most want, it’s reverb. Maybe because even if they’re playing the most low-down, dirty dive, they can sound more like they’re playing the Beacon, Fillmore, Ryman, or Radio City.

Since Fender introduced the Ecco-Fonic in 1959, many forms of reverb, including tape, tube-driven, solidstate, and digital, have come down the pike. One of the latest worth a close look is Guyatone’s FR3000V. Set apart from other outboard reverb units by its use of NOS GE 6K6Gt, JAN GE5751, and JAN12AT7WC tubes, the unit is traditional in its use of the industry-standard Accutronics ABC1B reverb pan.

The FR3000V’s cabinet is covered in black tolex with plastic corners, and its plexi-style front panel gives it a familiar English look. At 20″ x 71/2″ x 91/2″ it does need some space. Inside, wiring is clean and simple.

The 3000V is a full-featured unit; input and master volume controls allow for a near-infinite number of saturation adjustments and tones, and here are individual bass and treble controls, along with reverb volume. There are two inputs (one each on front and back) and one output, as well as an input for an optional remote bypass switch and a direct-out switch for a dry/reverb mix. 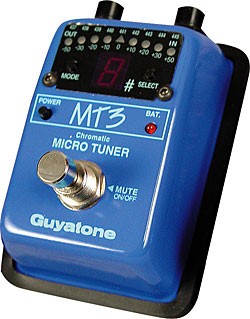 To give the FR3000V a listen, we used an early-’70s Fender Stratocaster with an all-tube Peavey Delta Blues 210 amp. We plugged the FR3000V into the effects loop of the Peavey and set the amp to the clean channel. Setting the Guyatone to the recommended “Sweet and deep Reverb” setting, we were greeted with just that – big, deep, smooth, fat reverb that added depth and warmth to the signal, with total transparency. Fabulous!

Many outboard reverb units sound outboard, but not this one. All of our Strat’s pickup positions sounded great,with the middle and neck being the standouts. We compared the 3000V to the Peavey’s onboard Accutronics 4EB2C1B reverb and found it to be lusher and deeper, giving the amp more life. The tone controls let us dial in tones ranging from smooth to slightly harsh. We set the unit to the recommended Reverb with Spring Sound and got markedly springier sound, reminiscent of the best vintage outboard units. The Saturated Lo-Fi setting gave huge reverb with long trails.

We next plugged the 3000V through the front of the Peavey (instead of the effects loop) and found the same great sound, though it was more sensitive to feedback. The FR3000V was no noisier than the onboard reverb in the Peavey, unless you really pushed the master. Switching the Peavey to the overdrive channel, we found the same great natural reverb tone. Again, the 3000V will feed back if pushed past normal. But this is typical, especially in overdrive.

The FR3000V is one of the best outboard reverb units we’ve heard, mostly because it sounds like part of an amp. If your amp lacks reverb, or you simply want a better reverb, the Guyatone FR3000V is a very good bet. 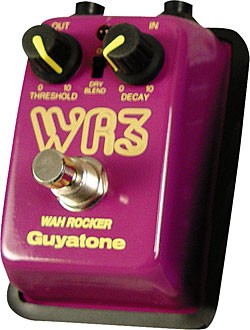 Guyatone’s Micro Effects, while small, offer great tones in a large variety of pedals – there are over 20 in the line, including four bass pedals, five overdrive/distortions, four modulators, delay, noise reduction, EQ, auto wah, tuner, and a slow volume.

We recently had a go with the MD3 Digital Delay, the MT3 Tuner, and the WR3 Wah Rocker, using a Tokai AST solidbody through a Crate V3112.

All three share features like stamped steel chassis, old-school stompswitch, isolated-ground 1⁄4″ jacks, and 9-volt negative-center power jacks. All can operate with a 9-volt battery, as well, though access requires removing a rubber gasket that holds the bottom plate.

We first checked out the WR-3 Wah Rocker, which is essentially an auto wah. We were pleased with the range of effect we could get by manipulating the threshold blend and decay controls; from quick and funky to subdued, all without adding any noise.
The MT-3 tuner offers a lot of features, including full auto-chromatic tuning, LED note display, a nine -LED tuner bar in 10-cent increments, calibration from 437 Hz to 445Hz, a sound (electronic pitch pipe) mode, mute switch, and advanced circuit construction that’s not supposed to alter your tone. The MT-3 worked well, providing fast, accurate tuning without drastically affecting the tone of the guitar. The unit’s only real drawbacks were the lack of any different temperaments and the somewhat limited LED window. 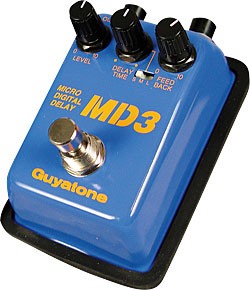 Unlike some other tiny effects, Guyatone’s Micro Effects are housed in heavy-duty steel cases and use heavy duty stompswitches to help produce good-quality, usable, noise-free effects comparable to their bigger counterparts.


This article originally appeared in VG‘s March ’05 issue. All copyrights are by the author and Vintage Guitar magazine. Unauthorized replication or use is strictly prohibited.