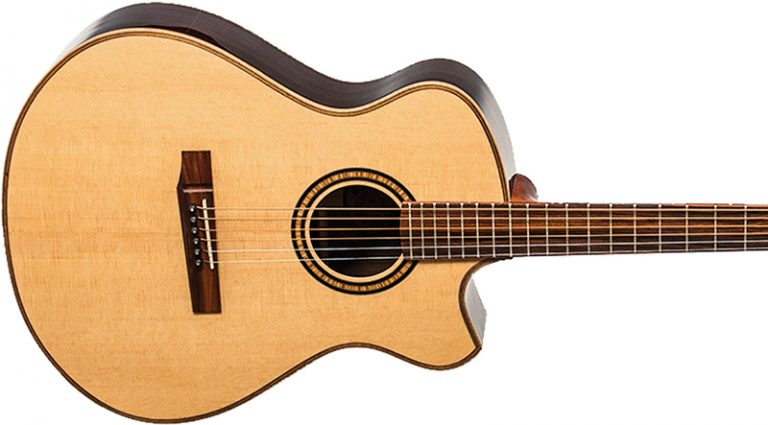 Though electric guitars have undergone radical change since the world first laid eyes on Rickenbacker’s “frying pan,” acoustics have rarely strayed from tradition. Andrew White is tweaking the system.

The West Virginian has reinterpreted the shape and dimensions of acoustic-guitar design, finding a median between jumbo and dreadnought with his Freja 1013W NAT. The Freja is comparatively short in body length – about a half inch longer than double-ought models – and its exaggerated soft shoulders and tight convex curves at the end of each bout bless the Freja with a distinctive look.

Its solid-rosewood back and sides are topped with Sitka spruce crisscrossed with flecks. A stylized logo is the only pearly bling in sight, yet the Freja seems decorative, warm, and inviting, with its curly maple binding, wooden purfling, and zebrawood rosette. The pau ferro bridge is discreetly shaped to optimize the gluing surface without being oversized or heavy. Players will appreciate the one-piece cedar neck with stacked heel overlaid with a pau ferro fingerboard and carved to a modern C shape. The headstock has an attractive rosewood cap. The neck joint is curved at the heel cap to match the body and headstock curves, while the finer details of the neck include a classic dovetail joint and two-way truss rod. The fretwork is clean, and the NuBone nut (in either 1.6875″ and 1.75″ widths) and saddle are functional tone enhancers.

The Freja has a distinctive look with a lofty level of craft. Its polyester finish and visible joinery (inside and out) are faultless.

Played with a thick pick, the Freja achieved a deep, bassy growl and plenty of rosewood presence, but less problematic woofiness – a characteristic that might sound good in the lap but has long been the bane of sound engineers. The upper register in the first positions showed the steely quality of a maple jumbo. The classic 25.5″ scale drew the best out of the Freja’s body, while the neck was substantial enough to enhance sustain, yet comfortably shaped for playability. Tightening the curves on an acoustic body generally results in a focused sound with fewer overtones than a dreadnought.

While not a bluegrass cannon, the Freja nonetheless delivered solid flatpicked single-note lines on fiddle tunes and modal noodling. The design, materials, and build permitted excellent string separation, giving strummed chords a texture that broke through the overtones produced by the Sitka/rosewood body.

Flatpickers can be stuck on the dread design much like gypsy jazzers want to park themselves behind something Maccaferri/Selmer-inpired, but open-minded fingerstyle players are going to find lots to like in the Freja, especially the W variant with its wide string spacing. It responded to bare fingers with a tuneful, even sound, while metal fingerpicks produced authoritative amplitude with cut and depth. Open tunings seem made for the Freja; the clarity of fretted notes contrasting with the ringing, open strings in octaves. The Freja produced a big sound, responsive to dynamic attack.