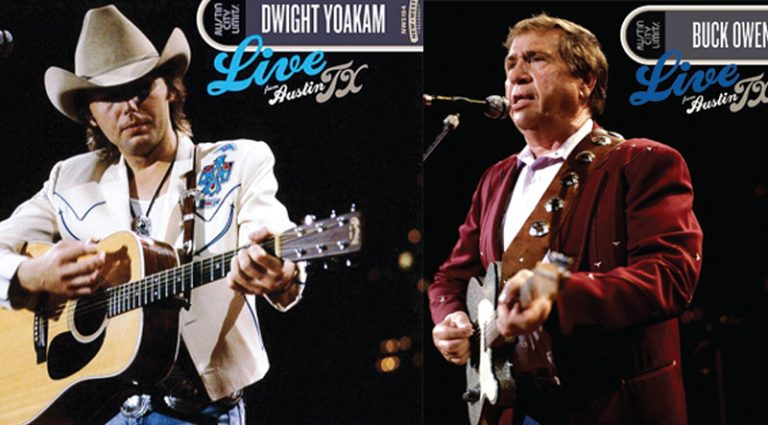 On October 23, 1988, Buck Owens and his biggest fan, superstar Dwight Yoakam were taping separate “Austin City Limits” performances. A year earlier, they’d met in Bakersfield when Yoakam invited his hero to join him onstage. Retired from music, the veteran hitmaker had long hoped the world would rediscover his twangy legacy. Master and disciple clicked, and Buck got his wish. They began gigging together, Buck fronting a revived Buckaroos. That summer, their duet remake of Buck’s obscure “Streets Of Bakersfield,” became his first #1 single in 16 years.

These two albums, available in vinyl, CD, or digitally, preserve the history and magic of that night in their “ACL” performances.

Yoakam accompanies himself aggressively on his Martin as he offers his hit singles of that era: “Honky Tonk Man,” “Guitars, Cadillacs,” “Little Sister,” and the rest backed by original lead guitarist Pete Anderson.

Toting a silver-sparkle Telecaster, Buck, with Terry Christofferson alternating lead and pedal steel, did the same, providing energetic versions of hits like “Act Naturally,” “Crying Time,” “Tiger By The Tail,” and his obscure ’50s rockabilly recording “Hot Dog,” joining Dwight for “Streets” and “Under Your Spell Again.”