In early 1984, Mark Dronge, son of the Guild founder Alfred Dronge, was president of Guild.

That year, Mark and I struck a deal to design six acoustic Guild guitars in two different body sizes. These were introduced at the 1984 summer National Association of Music Merchants (NAMM) show in Chicago. Reaction to the acoustics was good, so I had little difficulty persuading Mark to let me design an electric guitar in ’85. The prototype featured here is that instrument.

While most prototype instruments made by major manufacturers are built in their own factory and typically utilize standardized tooling and components, Guild let us build the prototypes in my shop in Nashville. Since the inlay pattern is the same as on the acoustic Guilds of my design, we were able to get a peghead veneer and fingerboard inlays from Guild, but the rest was entirely hand-built by Kim Walker, who was then my repair shop foreman. Kim later went on to work at Guild as Quality Control and Final Inspection foreman and is today well-known as one of America’s finest independent luthiers producing both flat-top and carved-top guitars.

I chose the name Nightbird for my new design. While this guitar looks like a relatively conservative solidbody, it is in fact radically different in construction from virtually anything that had preceded it. The back is routed hollow, except under the pickups and the stop tailpiece, to reduce feedback and provide a solid anchor for the tailpiece. The rest, including under the bridge, is hollow. The top is constructed of spruce, carved on the outside but flat on the inside.

Unlike a hollowbody guitar, which has a top, back, sides, neck block, end block, kerfed linings, and braces, or a semi-hollow guitar such as a Gibson ES-335, which has a solid center block for internal bracing, the Nightbird has only a top and a back resulting in a semi-hollow guitar with a significant component of acoustic response, but having no more components than a Gibson Les Paul with a mahogany back and a carved maple top.

Its neck is mahogany, while the fingerboard is ebony. The peghead shape features a traditional Guild pattern on the top, but is narrower than any previously done by Guild. It was my intent to provide a straighter string angle over the nut in much the same manner as the narrow-peghead “snakehead” designs done by Gibson on the L-5 of the 1920s and early ’30s. This is the same peghead I had submitted for my Guild acoustic guitars of 1984, however, the prototypes of those instruments were made at the Guild factory rather than in my shop, and their factory foreman modified my peghead design to use his existing tooling. The prototype Nightbird and the subsequent factory issued Nightbirds were the first Guilds to feature the peghead shape as I had originally drawn it.

The Nightbird, with its deluxe multiple bindings and pearl inlay, is an elegant instrument with artistic features reminiscent of jazz guitars of the 1930s through the ’50s, but the construction was a radical new design. Today, numerous makers produce instruments of similar construction such that this may now be considered an almost traditional construction technique. But there was little prior precedent for the Nightbird.

This prototype features Kent Armstrong pickups, one volume control, and one tone control with a push/push pot for coil splitting on the lead pickup. The standard production models featured a slightly different tune-o-matic-style bridge that screwed directly into the top. Otherwise, the instruments were remarkably similar in appearance.

When the model was first offered for sale, it came with a choice of special-design exposed-coil Seymour Duncan humbucking pickups, Armstrongs, or EMGs. Shortly afterward, Seymour Duncan signed an exclusive agreement with Kramer, and no longer was able to supply pickups to any other manufacturers. The production model was offered with a choice of spruce or curly maple top.

In August of 1986, I was part of a group that bought the Guild company. I became the Executive V.P. of Research and Development and Artist Relations, and was on the board of directors. I served in that capacity through 1988, during which time I designed numerous new models and helped modify existing models. Unfortunately, I soon found that being a minority shareholder had its drawbacks. Guild did not prosper under this management team and was sold to an investor who, after running the company for several years on his own, sold it to Fender, which owns the brand today.

The Nightbird went through a number of design changes after my involvement with Guild. A number of models with this same peghead shape and body shape were produced with chambered/semi-hollow bodies, as well as solidbodies. However, the peghead and body shapes date directly to this prototype Nightbird. Although Guild no longer produces Nightbirds, or any other guitars with this body shape or this type construction, the peghead shape continued on some Guild models.

While the Nightbird certainly wasn’t a commercial success on par with the Gibson Les Paul or the Fender Stratocaster or Telecaster, I view the design as a success in that it was a fine instrument, and because it influenced numerous manufacturers and numerous independent luthiers to produce instruments of similar construction.

Although the Nightbird is a fine-quality instrument with deluxe appointments, they’re available on the vintage market for far less than it would cost to build a replica. When judged in terms of bang for the buck, it’s a true sleeper. 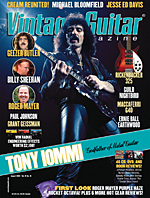 This article originally appeared in VG‘s August 2005 issue. All copyrights are by the author and Vintage Guitar magazine. Unauthorized replication or use is strictly prohibited.