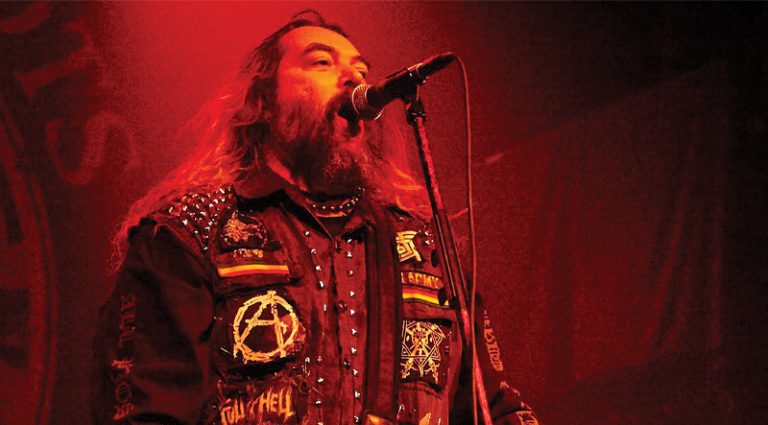 To the casual fan, heavy metal can get a bit “same sounding” after a while. But then there are those rare albums that are undeniably unique. Case in point is Sepultura’s 1996 classic, Roots, which combined de-tuned riffing with Brazilian percussion, exotic instrumentation, and chanting. Two decades since its release, Max Cavalera looks back on what made Roots so special.

It’s hard to believe it has been 21 years…

After the Chaos AD tour, the band took a break and the guys went to the beach in Brazil. I didn’t want to take a break, so I started writing and making four-track demos. When the guys came back, we started putting them into songs and the first we worked on was “Straighthate.” It was a really exciting time and we were very inspired. I was listening to a lot of different stuff – metal, Brazilian music. And that’s why Roots was this return to Brazilian roots of great sounds, mixing Brazilian instruments like berimbau and percussion. When we started thinking about what we were going to do with the record, Monte Conner at Roadrunner suggested we use Ross [Robinson], who had just done the Korn album and a Fear Factory demo I really liked. There was a really cool studio in Malibu, called Indigo Ranch, where he recorded a lot of the stuff. We banged out a bunch of songs and it was a great time.

Was there a sense that it would turn out sounding so unique?

We felt it was different, but we didn’t know it was going to be so successful and influential. But yeah, we felt it had something special about it. A lot of it was the way we were writing songs at that time – a bit more simple, more focused on the energy level and the impact. A song like “Roots Bloody Roots” is really simple – one riff almost the whole time, just going all the way. I sing on top of it, and it has a really catchy chorus that helped the song, then we gave it a really brutal, slow ending.

But when we started putting stuff on tape and listened back in the studio, I felt we were sitting on something quite special. I didn’t know it was going to be that big, but I felt it was different from we’d done before.

Which guitars and amps did you use for the album?

I was using Gibson at that time. I was on the verge of switching to ESP and had a contract with Gibson-Brazil, so I was with them for a couple of years. Before that, I was playing a lot of BC Rich stuff. But on the album, I used a lot of Gibson SGs.

Which guitars and amps do you currently use?

I am using ESP. I have my own line of guitars, the RPR, which I designed myself. It’s a mix between a Warlock and an Explorer, and I love it. The connection I make is if the Explorer and the Warlock had a kid, that’s what my guitar looks like… it’s the bastard son of those two. And I’m using a lot of Peavey – all different kinds of amplification. They have these little amplifiers that you can put in a backpack, so we can take it to South America and Europe. They sound just as great as the big amplifiers.

Which guitarists were your biggest influences?

I always loved Brian May. Queen was the first band I actually listened to, and I was a big fan. And of course, Tony Iommi is the godfather of metal riffs. Anybody that wants to learn to play metal, you cannot go wrong with Iommi’s riffs. Later, I started liking Tom Warrior, from Celtic Frost. I loved his writing, mixing a bit of hardcore in it. And Piggy, from Voivod. I liked all the crazy, wild stuff that he did, and weird chords. I always loved Eddie Van Halen, especially liked his sound and ideas.