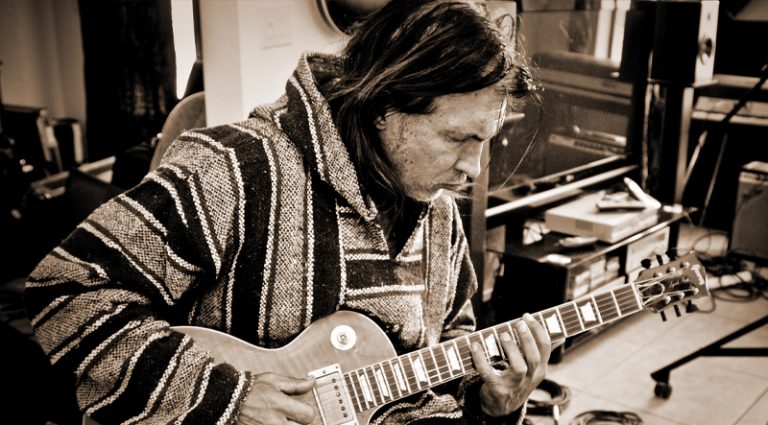 Musical chemistry is a rare thing. It’s not easily attainable, but when you have it, the fruits are magical. If you haven’t heard the project featuring George Lynch, drummer Ray Luzier of Korn, and bassist/vocalist Dug Pinnick of King’s X, you’re missing out. This is what chemistry sounds like. KXM’s second album, Scatterbrain, is one of the most edgy rock albums to marry chilling guitar, tribal-prog drumming, and gospel-tinged vocals. Lynch brings his A-game throughout, as he’s pushed outside his comfort zone for startling results.

The chemistry you guys have together is undeniable.

It’s a little gift to ourselves when we get together. It’s kind of a vacation from our regular music lives. We go in and pretend we’re in our garage-band days and do whatever the hell we want.

It must feel refreshing to make an album so quickly without beating it to death.

KXM is all about the process. That’s what really defines us. We’re not a real band in the sense that we’re not premeditated, made a career out of making the band successful, the tour, management, and all that stuff. We’re about improvising and seeing what happens. It’s liberating to be able to do that. It’s a rare thing to be able to come from different places in the universe, triangulate, and not have any preconceived ideas and notions about what we’re going to do. We set up in a room and say, “The clock is ticking! You have 12 days! Go! Make an album!”

We work well under pressure. If we hadn’t had a deadline imposed, we wouldn’t have the spontaneous results. We’re not over-thinking stuff. That’s not to say we couldn’t do a great record we’re all happy with if we spent a lot more time working on it, but I think it captures something when you’re forced to not over-think. Not that there’s no thought put into the record – it’s very complex. But it’s different than the normal records that I do; we’re using odd time signatures and a variety of influences that I’m really not known for. I had to stretch a little bit, which is a great challenge and interesting for me as a player.

How much does your rig inspire what happens?

I brought a huge pallet of options – seven or eight heads I kept swapping out until I found the right combination. One of my anchors was my old 1988 Soldano that I used on the first Lynch Mob album, Wicked Sensation. I think it has the Jackson transformer, and that thing has always sounded fantastic. It’s got a big low-end and it’s very girthy. It’s a great amp, especially for rhythms.

I like mating it with something else – sometimes a Trainwreck, or my old Marshalls that date back to my Dokken days. I have a very interesting JCM800 that was modified by Bogner. It’s very unique and very aggressive. I like mixing very aggressive amps with something a little more toned down – maybe an AC30 with EL34s. But the trick is to find two amps that work well together. The Soldano was a large part of that record.

What kind of guitars were you using?

I usually start with something substantial – my ESP Tiger, my Custom Shop Les Paul, or my ESP Super V, which is all mahogany. It’s pretty dark and Les-Paul-Junior-sounding. It has a lot of grunt to it. I’d use something like that on my initial tracks, then a lot of times I’d overdub it with something that’s got more spank. One of the guitars I use for that is my Linhof Super Telecaster. I put those together with those mix of amps and get an interesting combo.

You recently did a Dokken tour that went better than expected.

Getting back together after 25 years… people don’t really change that much. We had a blast. We were all kidding around like the old days. Obviously, we’re all older, but time hadn’t really passed at all. The band played well and we recorded a live DVD and a live album. It’ll contain semi-acoustic versions of three older Dokken songs. There’s also a new track, which is really cool.

I’m doing a project with Corey Glover, of Living Colour. He’s no joke! He will f**k you up! It’s similar to the project I did with Angelo Moore of Fishbone, but it’s a little more rock. It’ll be less weird (laughs)… Weird is not bad. I love weird (laughs)! I also have a Lynch Mob album in the wings, another Sweet & Lynch record, and an album with Jack Russell, of Great White.

Shedding Light on the Genius…