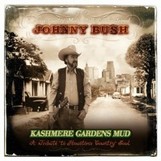 Johnny Bush is a true Texas original and one of the best living examples of real honky-tonk music. Looking back on all aspects of his 50-year career, he cut much of Kashmere Gardens, appropriately, at Houston’s famed SugarHill Studios, as a companion to his autobiography, Whiskey River. SugarHill was the birthplace of hits by artists from the Big Bopper to Destiny’s Child.

Another honky-tonk legend, the late Floyd Tillman, joins in on “They Took The Stars Out Of Heaven,” with Johnny Gimble supplying electric mandolin, but the best track is Johnny’s duet with his brother, Rev. Gene Shinn, on the Bush-penned gospel number “I Want To Drink Of That Water.”

As the title of his book implies, Bush wrote Nelson’s hit “Whiskey River,” and here he returns the favor by cutting two of Willie’s best-known compositions, “Family Bible” and “Bloody Mary Morning.” Nelson, in turn, wrote the typically short and wry forward to the autobiography of the man he refers to as a “good friend, good drummer, good singer, good levitator.”

Needless to say, he’s those things (well, maybe not levitator) and much more. Here, Bush recounts his life and career in a manner as honest and straightforward as his music – from his dirt-poor beginnings to life on the road to the business side of music (including his view that Nashville has lost its country soul) to a debilitating condition that literally caused him to lose his voice.

Thankfully, that voice is back – on CD and in print.

This article originally appeared in VG’s Sept. ’07 issue. All copyrights are by the author and Vintage Guitar magazine. Unauthorized replication or use is strictly prohibited.