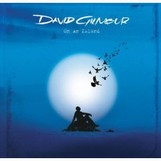 This is an expanded edition of Gilmour’s 2006 DVD of material from a live AOL session. The DVD is a bit sterile, done in a studio with no audience, but the playing is superb. There are six cuts, all featuring Gilmour and band at the top of their game.

Gilmour took heat for the CD version because he didn’t heat things up; folks said it was dull.

But if you prefer to use the term “atmospheric,” it’s tough to top cuts like “The Blue” which is incredibly melodic and contains some of the best Gilmour six-string work ever. Same can be said for the title cut, a lovely ballad with layered vocals contributed by Graham Nash and David Crosby. Overall, the track does have that one-too-many-downers feel that a lot of Floyd songs had, but the sheer loveliness of the song and the power of the guitar solo negates that effect. “This Heaven” is a bluesy acoustic tune with a great hook and a biting solo. The piano ballad “A Pocketful of Stones” overcomes a silly lyric with its Gilmour solo, full of the long, liquid notes against strings and piano.

Whether or not you are/were a Pink Floyd fan, you’ll find the terrific melodies and earnestness in Gilmour’s playing on this disc to be quite enjoyable.