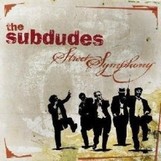 It’s a good thing the Subdudes decided to “put the band back together” in ’02. In this set of music, their first since Hurricane Katrina devastated their hometown of New Orleans, they touch on the many aftereffects and hit a lot of familiar themes.

A couple of songs influenced by Katrina include “Thorn in Her Side”- “her” being the Statue of Liberty, and the song addressing the government’s effort in the aftermath of Katrina. “Poor Man’s Paradise” is a Louisiana tale, pure and simple; a look at New Orleans, post-Katrina. The pop-soul feel is pure Subdudes, with fabulous guitar from Malone. “I’m Your Town,” asks people to look at their own hometowns and includes harmonized guitars over an acoustic opening.

Other great songs include the title cut, with its percolating single-note guitar and soulful vocals capturing the essence of this CD and the band. “Brother Man” features fat guitar fills set to a gospel feel and a great lyric. “No Man” is a quintessential Subdudes guitar tune – a soulful ballad with tremeloed guitar outlining the changes and a solo as good as it gets.