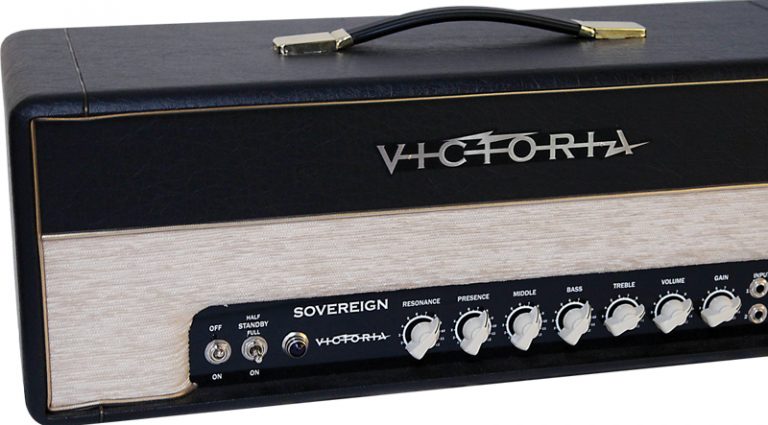 Tubeheads the world over are well-acquainted with the story of Jim Marshall lifting the Fender Bassman circuit in 1962 to create his venerable JTM45. To the uninitiated, “similar circuit” means “similar tone,” but anyone who has played both a tweed Bassman and a plexi can tell you they are not the same. Marshall used a different chassis, different transformer, a 12AX7 as the first tube in the chain (the Bassman has a 12AY7), and a modified negative-feedback circuit that affects the amplifier’s harmonics. Different materials and components do count.

It’s interesting, then, that Victoria, highly regarded for its Fender tweed reproductions (especially the Deluxe), has introduced the Sovereign, its first venture into the Marshall-style head market. Over the years, Victoria’s Mark Baier has built custom 50- and 100-watt plexis, in the process learning what helps make the Sovereign unique and familiar at the same time.

The Sovereign’s first input-stage tube is an EF86 (a pentode similar to an EL34) that is like having a miniature power tube in the first amplification stage. The signal is further amplified by the traditional 12AX7 powering the JMT 5 cathode-follower tone stack. At minimum gain settings, the Sovereign behaves like a vintage JTM45, with cleaner Fender-like tones. With increasing gain, there is progressively more clipping and saturation of the EF86, driving the subsequent stages harder. At higher gain values, the Sovereign achieves a nice balance in its distinctive Marshally crunch. No doubt, the Sovereign’s unique input stage sets it apart from other Marshall-style heads. The phase inverter tube is an NOS 12AT7 as stock, but may be swapped with a traditional 12AX7 for a more aggressive output-stage.

The front of the Sovereign looks much like other Marshall-style head amps, with two inputs (low and high) and chicken-head knob controls for Resonance, Presence, Middle, Bass, Treble, Volume, and (of course) Gain. The amp is very reactive to all controls – not always the case with JTM45 wannabes. A “Half-Power” function is incorporated into the standby switch to reduce specific power supply voltages to the Sovereign’s output stage. There’s an effects return in the back, along with Level/Blend controls and 4-, 8-, and 16-ohm impedance taps from an oversized output transformer. The effects loop is post-tone stack and when not employed with effects may be used for additional gain boost. The loop can also be employed as a preamp out or slave by allowing the player to plug directly into the power amp through the return jack.

The Sovereign performed well with both 2×12 and 4×10 cabinets of Weber speakers. It sounded great with single-coils but seemed born to be paired with humbuckers. It handled a variety of pedals nicely without losing its character (the better choice is to use the effects loop). A Tube Screamer got it crunchy at reasonably low volumes but the Sovereign really shined with nothing but copper wire between the pickups and that first EF86. It’s hard to see the Sovereign living a peaceful life as an apartment dweller.

The Sovereign is totally hand-wired, point-to-point with an eyelet board and using custom Victoria orange capacitors and Allen Bradley resistors. The transformers are proprietary to the Sovereign and wound by a longtime Chicago-area manufacturer. The Sovereign is designed to operate 6L6, EL34 (stock with the Sovereign), KT66 or any of their equivalents. Bias is adjustable internally with current-measuring resistors attached to each power tube cathode for easy biasing with a digital voltmeter. A good amp tech will find everything in the chassis friendly, refreshing, and Marshall-Fenderishly familiar.