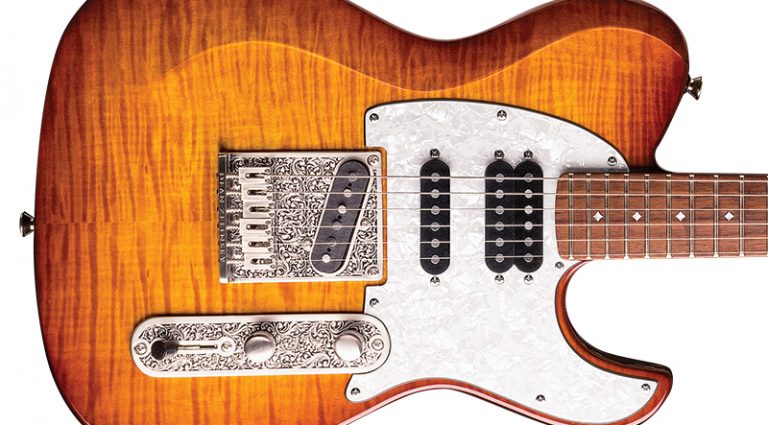 Dean Zelinsky’s history as a guitar builder includes unique designs that are toneful and eyecatching. To many, he might be best known for his early designs inspired by Gibson’s futuristic models of the late ’50s; others remember him for his ads in the 1980s co-starring what came to be known as “Dean Girls.”

Zelinsky’s a new line of import guitars are budget-friendly, professional, and striking with their high level of playability, fit, and finish. Because Zelinsky offers instruments factory-direct, buyers can customize many features including pickup configuration, hardware, and colors. He also added unique options including engraved hardware, engraved bodies, and his Z-glide neck with carved impressions to reduce hand-on-neck friction.

We recently received one of Zelinsky’s Dellatera Custom single-cutaways for review with the optional Z-Glide feature, SideKick pickup, and Tejas engraved hardware. A beautiful instrument, it sported a flame-maple top, pearloid pickguard, and engraved bridge and control plate. Controls included a five-way switch along with a Volume and push/pull Tone knob to control the neck pickup.

Besides the SideKick in the neck position, this Dellatera came with single-coils in the middle and bridge positions. Its modern 1 11⁄16"-wide neck was medium depth, with a bend-friendly compound-radius fingerboard with 22 medium-jumbo frets.

Spinning the instrument around, it’s hard not to be taken aback by the Z-glide neck, whose unique etchings are quite out of the norm and proved extremely comfortable to play while never exhibiting the “sticky neck” syndrome common on all levels of new instruments. The headstock was adorned with a set of easy-to-string locking tuners.

Using a reissue ’65 Deluxe Reverb and a smattering of basic pedals, this flame-topped beauty was plugged in to see what it could do. The SideKick neck pickup was robust yet clear in humbucking mode, and in single-coil mode made for even clearer tones with only slightly reduced mids and bass response. In fact, it was amazing how close the output was in both single-coil and humbucking modes.

Keeping the coil tap on and switching to position two elicited the classic “notched number-two” position. Going back to humbucker mode in this position made for a bigger sound with more bass and reduced trebles. The middle single-coil on its own was also quite clear, but had a little more attack and punch, being closer to the bridge. Moving to position four made for a great implementation of one of the most used electric guitar tones of the last 40 years. The bridge pickup had just enough twang and grind to cover a wide variety of clean to overdriven tones.

Perhaps most impressive was how the Dellatera’s flame top, engraved hardware, playability, and tonal versatility were all delivered at a down-to-earth price. The Z-Glide neck is highly recommended and well worth the upcharge, creating a much more comfortable playing area.